Nikki Kuhnhausen was 17 years old when she disappeared from her hometown of Vancouver, Washington to allegedly meet up with a 25-year-old man she met on Snapchat. That was June 6, 2019. After she was reported missing, David Bogdanov was named a person of interest in her disappearance.

Nikki would have turned 18 on July 6 this year.

Bogdanov claimed Nikki walked away from his vehicle after a dispute. Her body was discovered on Larch Mountain in the remote northeastern part of Clark County, Washington on December 7.

For six months, no one knew what happened to Nikki and now their worst fears have been confirmed. She didn’t get to graduate high school or experience a single moment of her adult life potential. Her life was extinguished by a man she met online and only because of her gender identity.

It seems important to note that no 25-year-old man should be meeting secretly with a 17-year-old, cisgender or transgender, male or female.

Bogdanov was arrested on December 17 by Vancouver police and charged with Kuhnhausen’s murder, and his cell phone records according to detectives,  put him in the same remote area of northeastern Clark County on June 6 where Nikki’s remains were found.

Bogdanov has been charged with second degree murder, and is being held without bail.   He will face his first appearance in Clark County Courthouse. 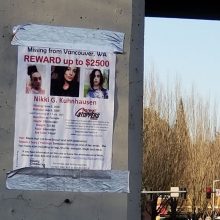 We will share more details as they become available. Sadly, the mainstream media maintains its record of misgendering and poor reporting on Nikki’s life and death. Putting her name “in quotes” is not accurate or responsible, especially when the man who killed her is claiming her identity made him do it.

Rest in power, Nikki. You deserved a good, joyful transition from your youth to adulthood and an adult life filled with joy, passion, and love. Your friends never stopped hoping. Your family misses you.

My list of transgender neighbors lost during the calendar year 2019. It seems each year in this process of documenting the lives and deaths of our trans neighbors, the numbers start to differ – folks are using different criteria. Details about too many deaths are obscured or never come to light making it hard to pin down just how many transgender neighbors are caught up in this epidemic each year. I try to be as accurate as possible with details for the discrepancies listed below. I know that no list like this one could ever be comprehensive or thorough.

*** The death of Elisha Chanel “Diamond” Stanley on September 16, 2019 in Pittsburgh has been ruled an accidental overdose. We have more information here.