Another Black trans woman has been murdered, this time in Clewiston, Florida. Her name was Bee Love. She was 21 years old, just a week away from her 22nd birthday.  Clewiston is part of the Florida Heartland, a region closer to the Deep South than coastal Florida cities. It has been just 24 hours since we reported on the murder of 17-year-old Bailey Reeves in Baltimore. Our young people are dying at horrifying rates. Where is our progressive movement?

Local media are simply reporting on the discovery of an unidentified body in a burned vehicle. Other reports indicate Bee’s body had multiple gunshot wounds and that she may have been tied up in the front seat of the vehicle. 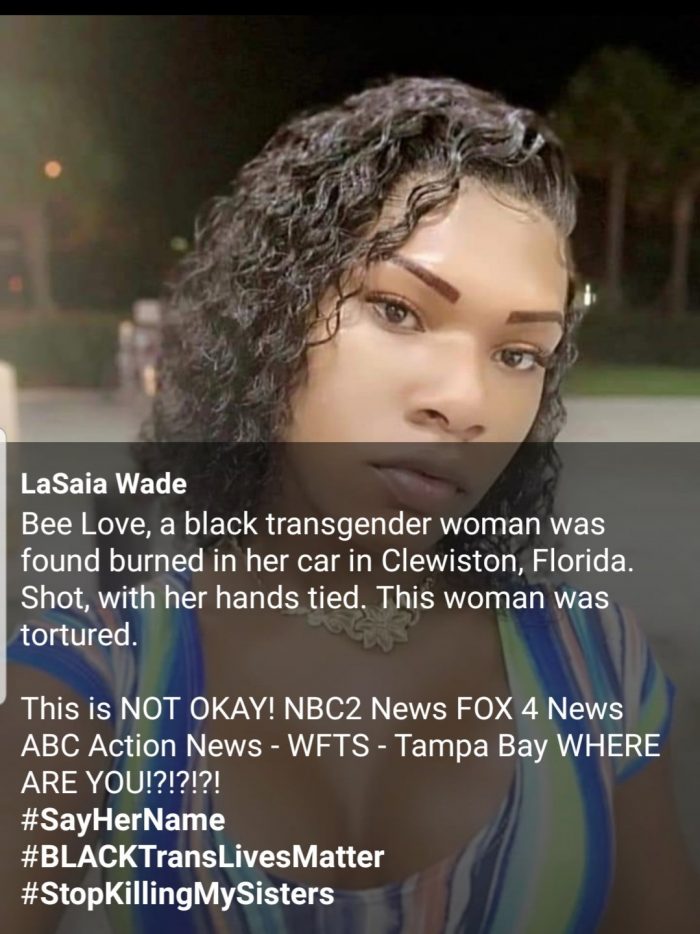 HENDRY COUNTY, Fla. – Early Wednesday morning, Hendry County deputies found a body in a burned vehicle They received a call about a vehicle fire near 13th Street and Virginia Avenue, Harlem, in the Clewiston area, according to a Hendry County Sheriff’s Office news release. Then, they found a body inside. Investigators said the body in the vehicle was burned beyond recognition

Friends and trans activists are raising a hue and cry about the need for media coverage and for public information on the investigation. They are outraged that Bee’s death isn’t being more widely investigated.

Friends have organized a vigil on Friday, September 6, 2019 at 7:30 PM. The location is Fremd Villages in Pahokee, Florida.

As I was scrolling through Facebook to read about Bee’s life, I was heartened and saddened to see new content popping up every few minutes – news of her death has spread widely and acknowledged by so many friends and strangers as something that we need to address. But there’s a disheartening sense of resignment as well because mainstream society and the mainstream gay community are not investing in efforts to stop this endless violence.

And I find myself uncomfortably familiar with a routine related to these In Memoriam posts causing me to wonder if I am doing enough. This shouldn’t be routine for me. I still feel the impact of Bee’s death and the horrifying tragedy, but I’m not surprised that the private response of her friends and allies is swelling far beyond what the public assets will offer. That level of tragedy is numbing.

On Bee’s Facebook page, she shares a quote “Having a GAY child doesn’t mean you failed as a parent, DISOWNING your GAY child means you FAILED as a parent.” Her compassion and perception at 21 exceeds most of what the rest of us possess much later in life.

Rest in power, Bee. Your vibrancy and loving network of friends will keep your legacy alive and thriving, but that’s not enough. You deserved years to grow into your adult self and make your mark in this world.