UPDATE: Out.com has an article with more information about the circumstances around Keyiariah’s death. Most important is the dispute of claims she was murdered. I’ll continue to follow the reporting and hope that the truth comes to light.

While Wilson claims a man Quick was casually seeing forced her to ingest an unknown substance which made her “start foaming at the mouth,” a representative for the Moore County Sheriff Department alleges the death was likely an opioid overdose. Its office doesn’t suspect foul play.

An autopsy is currently being performed, officials add.

The discrepancies only continue from there. According to Wilson, a suspect is being held on bond but police say there’s no record of any arrests following the incident. Wilson says Quick was discovered at 1 p.m. on Saturday, but law enforcement says the body was found around 8:30 a.m. or 9 a.m.

Keyiariah Quick was born and raised in Carthage, North Carolina. In January, she began working at Sonic Drive-In and saying with a cousin in nearby Greensboro. On August 10, she became the 15th Black trans woman reported dead in 2019 to date. If homicide is confirmed, she would be the 16th trans person to be murdered in 2019 and the second Black trans woman from North Carolina in the past two months.

Details are very limited right now about the circumstances of her death, but her family and friends and organizations on the ground in North Carolina have claimed that she was shot to death. The report from OUT indicates that is not the case — police do not suspect foul play and her family is stating her death was not a homicide, while some of her distant family and friends maintain the opposite. Even the time of her body being discovered in still in dispute.

On Saturday, Quick’s body was discovered by police officers in the nearby town of Vass in the early hours of Saturday morning, according to a representative from the Moore County Sheriff Department.

This comes not even a week after another Black trans woman was reported killed with again very limited details about her death in South Carolina. I haven’t found any acknowledgement at all in the media that she died or acknowledgement of her death using any name. It strikes me as odd that this lack of information would happen twice in a week’s time in two adjacent states. I’m not wishing for Keyiariah to be deadnamed or misgendered, but I also don’t want her to be erased from the conversation as if her life and death didn’t happen or warrant a mention. I’m puzzled by this lack of media coverage.

Now I’m not so puzzled if local authorities are saying she likely died of an overdose, I understand why so few would even report on that. I’m not saying I agree, I just understand how this might have unfolded. It is just mind boggling that young people die and we turn such a blind eye.

Please note that some members of her family are using both her deadname and her real name interchangeably in their social media content. The family announced plans for her funeral (misgendering) with a viewing on Friday and burial services on Saturday at Pugh Smith Funeral Home in her hometown of Carthage. It is clear from their comments that they loved Keyiariah and must just be devastated by her death.

However, again from OUT.com, other people who knew Keyiariah state her family did not accept her.

Kris Wilson moved to Greensboro in 2005, and Quick had allegedly been staying with her on and off over the past year. Quick’s parents weren’t accepting of the fact that she was transgender, Wilson says, and she took the 25-year-old under her wing, calling Quick her “understudy and protege.”

Word is spreading fast on Facebook as so many people respond in horror and anger about losing yet another of our young women. Another thing I feel compelled to add is that while people are responding, they continue to ask why “other people” aren’t doing more to stop the violence targeting our trans neighbors. 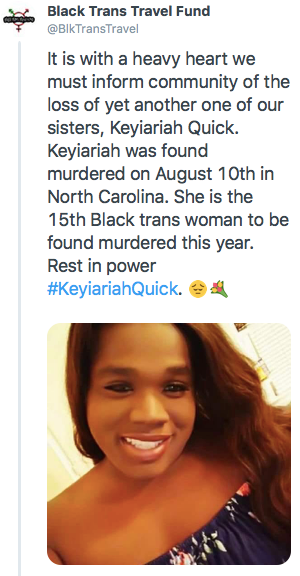 We know that her death is tragic and that her life appears to have been fraught with transphobia and rejection by her family. I keep thinking that a lesson from her story reinforces that families of young trans and nonbinary folks, all young LGBTQ folks, need to figure their own stuff out while creating a safe space to protect their kids. How much more evidence do we need that refusing to acknowledge and respect the identities of our youth does more damage than whatever good is achieved by denying, disregarding, or openly resisting?

The complexities of her death story also underscore the reasons why we must pay attention to the myriad of barriers and threats our trans and nonbinary youth experience, only heightened by the lack of family support and the hostile political climate.

Rest in power, Keyiariah. 25 was far too few years for you to be with the people you loved. I believe the community will continue to lift you up until there is justice for your death. I am so sorry and so angry for you.