Sue is founding editor of Pittsburgh Lesbian Correspondents blog, established in 2005.. She has an MSW from the University in Pittsburgh and a BA in Political Science from Marymount University. Her undergraduate claim to fame is a six month stint as an intern with then Congressman Rick Santorum in 1991. Born and raised in West Mifflin, Sue attended college in Washington DC, then graduate school in Louisiana and ended up in Kentucky doing social service ministry. She returned to Pittsburgh in 1997. She now lives on Pittsburgh’s Northside with her wife, Laura. She was among the first out LGBTQ people named to Pittsburgh’s 40 Under 40 in 2004 and is a graduate of Leadership Development Initiative Class VII. After being fully and permanently disabled in 2010, Sue has continued to serve the community. She founded the Pittsburgh Tote Bag Project to address hunger and environmental issues. In 2015, she launched the #AMPLIFY LGBTQ archive in conjunction with a two-year artist in residence stint with Most Wanted Fine Art. Sue and her wife have fostered over 25 kittens through Pittsburgh CAT and Homeless Cat Management Team, and now manage multiple community cat colonies in their neighborhood. In 2020, Sue cofounded the Pittsburgh MasQUe ProjecT to support the queer and trans community during the pandemic, distributing tens of thousands of face masks and other supplies throughout the region. In 2021, Sue created the #PghCatFolx projects to support neighbors working with community cats. Under that heading came the Dr. John P. Ruffing DVM Pet Food Projects, memorializing one of her very best friends who died in 2007. In 2021, Sue worked with community leaders to develop and establish a 501c3 nonprofit organization, Pittsburgh LGBTQ Charities (PLC) where she currently serves as Board President. PLC absorbed the #PghCatFolx projects. Also in 2021, Sue was the first person in history appointed to the City of Pittsburgh LGBTQIA+ Commission and was unanimously elected as one of three inaugural co-chairs. Her blogging has garnered numerous awards Favorite GLBT Media Publication - 2012, 2014, 2015, 2016 (Keystone Alliance Gaylife Newsletter Reader’s Poll) Favorite GLBT Social Media - 2013, 2014, 2015, 2016 (Keystone Alliance Gaylife Newsletter Reader’s Poll) Best Local Blogger - 2016, 2019 (Pittsburgh City Paper Reader’s Poll) LGBTQIA Pittsburgh’s Best Blogger - 2020 (SisTersPgh, People’s Pride of Pittsburgh) LGBTQIA Pittsburgh’s Best Lesbian Activist - 2020 (SisTersPgh, People’s Pride of Pittsburgh) Outstanding Blog - 2019, 2022 (GLAAD Media Awards) Sue believes in identifying and filling gaps in supports & services rather than recreating the wheel. She uses both her undergraduate and graduate degrees on a regular basis as a blogger and activist and regularly circulates her 1991 internship photo just to shake things up on her social media feeds. Her own experiences with cPTSD, bipolar disorder, anxiety, and other health challenges have fueled her health blogging and activism. She also writes extensively about her family history, drawing on her amateur genealogy hobby. The blog regularly reviews arts and cultural events as well as exploring restaurants, soap opera storylines, and hyper-local news. Sue and her wife Laura have been together since 2003. They were married on a very cold February 2, 2021 in their backyard at a very small ceremony co-officiated by their pagan priestess friend, Anne, and then-Mayor Bill Peduto. They have six niblings, four in Pittsburgh and two in Philadelphia.
Entertainment and MediaMain PageWe are Family!

Sunday evening's edition of 60 Minutes included Lesley Stah's report “The Science of Sexual Orientation”  in which she explores recent research into sexual orientation.  Today, scientists are looking at genes, environment, brain structure and hormones. There is one area of consensus: that homosexuality involves more than just sexual behavior; it’s physiological. The show interviewed two […]

This is awesome. I found this through Pam's House Blend Miami Herald columnist Leonard Pitts, Jr. takes a local homo-hater to task.  An open letter to Donna Reddick: I'm writing this for Desiree. She's a student at Miami Sunset Senior High, where you teach business technology. A few days ago, she sent me an e-mail […] 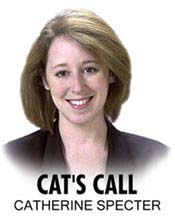 Hurrah for Catherine Specter! This week's version of the PG column Cat's Call manages to avoid being racist or sexist.  She even musters up a little “catty” rant that is mildly amusing if not actually funny.  Otherwise, it was boring as can be. I guess that's the best we can expect.  Note that this week Cat adroitly […]

In today's Pittsburgh Post-Gazette, Jane Little of Mt. Lebanon responds to the question of why the worldwide Christian community remain silent about the homophobic outrages in Nigeria which are endorsed by the Nigerian Anglican Church.  (One response appeared last week.)  Ms. Little writes ” Surely the bishop knows that the tension within church communities is […]

The Catholic Church strikes another blow for homobigots everywhere.  365gay.com reports that Catholic Charities of Boston will no longer provide adoption services because they choose not to comply with the states human rights law requring them to not discriminate against GLBT parents.  The Catholic Church wants a special exemption from the law. They want to […]

During the Thursday evening broadcast, KDKA news stepped over the line covering a local fire.  A Trafford fire left 10 people homeless; everyone made it out alive and unharmed.  But to get the sensational angle, David Highfield  stuck a camera in the face of one victim who was clearly distraught over the deaths of her […]

Last night, we went to see Crash at The Manor in Squirrel Hill.  This is one of your lesbian correspondents stating that Crash deserved the Oscar for Best Picture over Brokeback Mountain.  I loved Brokeback and believe it to be one of the best movies in my 35 years of movie watching.   But Crash resonates […]

Tune into the John McIntire show tonight on KDKA when John interviews local Presbyterian minister Janet Edwards. They'll be discussing the Presbyterian Church response to Edwards' performing a wedding for two women this past summer. 8 PM on KDKA. Sue