We are proud to be the official social media sponsor of the ReelQ Pittsburgh Underground Film Festival (PUFF) August 4-6, 2017 at the Melwood Screening Room.

The opening night feature is Ovarian Psycos directed by Kate Trumbull LaValle, Joanna Sokolowski. Ovarian Psycos documents a new generation of fierce, unapologetic and feminist women of color from the Eastside of Los Angeles who confront injustice, build community, and redefine identity through a raucous, irreverently named bicycle crew: The Ovarian Psycos Cycle Brigade. Through the personal stories of the crew’s founder, Xela de la X, activist, poet M.C., and single mother; street artist and original Ovarian Psyco, Andi Xoch, and a bright-eyed young woman from the neighborhood, Evelyn (Evie), the film traces how the “Ovas” emerged from the diverse, youthful, Latino, working class, immigrant neighborhoods of Boyle Heights and East Los Angeles, a community situated within the historic legacy of the Chicano/a Civil Rights Movement that emerged from L.A. in the late 1960s.

Maryann is a member of the Ovarian Psyocs Bicycle Brigade and she will be coming to Pittsburgh for the screening. She took some time to talk with us about her experiences. You can meet her Friday at the Melwood Screening Room. Doors at 6 PM, film at 7 PM. Tickets here.

Describe your impression of Pittsburgh. What about our city resonates with you?

I didn’t know much about Pittsburgh, I knew that they had a Serve the people chapter and they too were dealing with displacement. Every city seems to be dealing with some kind of displacement. There also seems to be some kind of straddling on how to perceive it, which means the tactics to fighting it has become weaker and almost apologetic. I read a few articles about how Pittsburgh is doing direct action. I was eager to come to the screening to hear this from people in the pitt of it. So Pittsburgh sounds a little like La. 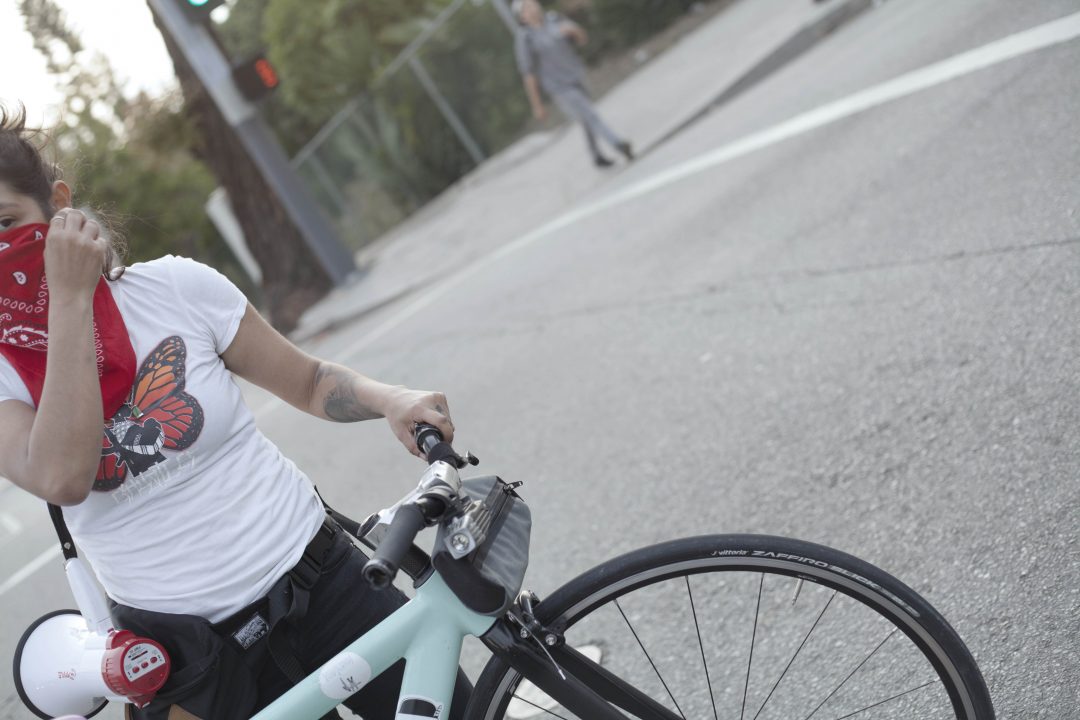 I would say I am a women of color who is fighting her struggles day by day. It’s hard to stay confident in what you do when you are constantly being beat down by public standards, criticisms and expectations. I don’t do a lot of things women should do. Coming from a mexican american household, mixed with institutionalized parents, the expectations start at a very young age. So trying to deal with that while also trying to find comfort in who you are growing up to be, becomes difficult because “God” said so.

What are your pronouns?

she/her sprinkled with a little masculinity.

I find it interesting in so much of the media coverage of the film and the group, there are references to  the ‘future’ of feminist activism as well as the legacy of women of color organizing, as if this is a singular novelty rather than a rich history. How does that future look in five or ten years? Why is solidarity among women of color so threatening to everybody else?

We are currently holding down our HQ in Boyle Heights, La Conxa. We continue to be on the front lines with the most affected by gentrification, deportation and LAPD youth genocide. We hope to continue to have our space, but not just have it, keep growing and developing more to offer the community at that low price of autonomy. We can’t wait to turn Clitoral Mass aka Black Mass all over cities that are oppressed to ride in the streets together. Different Places and Same Time, That’s solidarity.

Pittsburgh has a love/hate relationship with bicycling. We have both monthly ‘underwear rides’ and a lot of antagonism over sharing the streets. I think most folks here perceive cycling as a tool for the elite or privileged, not activism (except for the advocacy of cycling itself.) How do we open the narrative around cycling to include those for whom it is more than a hobby or a choice they make while having lots of options?

Well, I think that often times we neglect the very big portion of people who use bike to get to work, school because that is all they have access to. I also feel, now for group rides or monthly naked ride, its making sure that the ride is open to everyone. So many times I have entered bikes rides and felt completely isolated and i am surrounded by 100’s. So why feel isolated ?? because nobody talked to me, smiled or even greeted me. One thing i appreciated from my first luna ride back in 2011 was the love and comfort i felt instantly. Which i what i continue to do as an active psycho, I know it sounds like a small step but before you can do anything it starts with building community. Also, outreach your ride so it’s not only a few entitled, privileged people but yet everyone.

I’m afraid to ride my bike on the street. I’m anxious about traffic, I’m anxious about my fitness level and my ability to keep up, etc. Sometimes we drive our bikes to a nearby trail but that feels wrong and I also struggle to manage the loading/unloading given our physical size. But I love the sensations of riding a bike. I love the way it makes me feel strong and fast and beyond the limits of the short woman who can’t lift two bikes onto a rack without a struggle. I want to be the powerful woman who rides, but how do I get past the anxiety and fear and isolation? (I should add that I don’t currently own a bike.)

I got into 2 bike accidents in less than a year. I totally feel you. I relate and i am still learning how to get over it. Riding with others can really help. I also realized that some people don’t have the accessibility to even have an option to jump on a bike and just go. That’s what really made me realize, I got this. I will be okay. The more you ride, the better you get. I like to say, one doesn’t ride a bike in Los Angeles, One survives riding a bike in Los Angeles.

Tell me about the very first LGBTQ person that you knew and how that relationship impacted you?

My momma, She had her fair share of me, she has 5 beautiful kids, But she’s well-balanced, she’s also had her fair share of women. I think it made it normal. I grew up never knowing this was frowned upon because I started seeing it as a young, young girl. I remember my mom and her GF taking me to trick or treat as i was the pink ranger. I remember my mom having a girlfriend’s name tat’d on her arm. I am glad i experienced that and didn’t grow up with a biased opinion.

How can allies support the Ovas and similar groups in our own communities?

We  have our 13 principles of unity on our website (www.ovarianpsycos.com) I encourage people to get together, find a common struggle and figure out what you can do within each other to fix, shine light too..sometimes we don’t have the answers but we have the ability to offer a brave space and get these dialogues started

Yes, I was to remind everyone. The work we do is a necessity. We need to make sure the voices of the unrepresented gets heard. Self care is very important but it’s also a privilege that many generations before us never knew. It’s good to practice self-care but too many organizers are using self-care as an excuse to not continue to handle. It’s a privilege to even be “woke” – its our duty to use that privilege for the unrepresented and the ones who often times go without being heard. Let us remember this, without actual movement there is no panel to be on, there is no work to discuss, so my advice is let the organizing be your self-care sometimes. It’s good for the soul.

Finally, should I bring my 11-year-old niece to see the film?

What is your love song to LGBTQ youth?

Get your tickets now or at the doors for this screening on Friday night at the Melwood in Regent Square.

Facemask Q&A with Oneita Parker of The Proper Bunny