"
About the BlogDonateSteel City Snowflakes

On Monday, we had to race one of our foster kittens, Taggert, to an urgent care vet. He had a temperature of 105.4 and was lethargic. It turned out he had some sort of ulcer in his mouth from an unknown cause.

The vet emphasized how important it was to feed him, thinking we’d need to syringe feed him b/c the ulcer would interfere with normal feeding. She told us he could fade quickly – that’s a common concern with sick kittens.

Fortunately, he’s doing great. He slept most of Monday, but actually ate some adult cat food that evening. I could see he was chewing on one side of his mouth – but he was eating on his own. The next day, he ate some wet food. We’ve medicated him as instructed and watched him like a hawk. He’s been energetic, racing around with his siblings, and he even gained a few ounces.

This AM the vet pronounced him almost good as new. He needs the mouth wash medication for a few more days and he’ll continue to enjoy a diet of adult cat food until he’s healed. Right now he’s eating in the kitchen and that means he’ll be settling down for a nap soon.

I’m so relieved. Laura and I have fostered about 30 kittens (and a few cats) over five years and we’ve not had any of them die. They are all thriving in their adoptive homes. And all of them have been sick – we’ve been to urgent care or the foster tech team with each placement, sometimes multiple times. Usually, it is upper respiratory viral issues that can be deadly. These are the kittens that would die if left “feral” and that’s sad.

We seem to have an affinity for working with kittens around 5-6 weeks to help them learn social skills and thrive. Part of that is because we use our bathroom as the kitten room so they have a lot of space that’s clean and sanitary, they have a decent space to zoom (for a kitten), and we are in the bathroom quite often so they get lots of human interactions. And they often jump into the shower.

But we also pick up on sick vibes quickly. We know that even the hint of an issue must be addressed so as soon as we suspect something, we swoop into action. And as with this case, early intervention saves the day. I’m not saying other foster parents don’t do this, simply that we seem to have a knack for knowing something is wrong – an intuition of sorts.

I’m still a little sad about missing the Governor’s LGBTQ History Month Reception. The past few days have been exhausting, dealing with the anti-trans hate ads that ran on eight local radio stations (we’ve successfully had two stations pull their ads, six to go), promoting outreach into Beaver County to address the anti-trans sentiments from South Side School District, navigating the Post-Gazette strike and the foreboding actions of the parent company of the Pittsburgh City Paper. There’s LGBTQ election news, stories from other states that are terrifying, and more. I wrote about the killing of a trans woman in Miami, Florida and not a single LGBTQ outlet has picked up the story – her name was Tiffany Banks and she was a 25-year-old Black trans woman. She deserves to have her life and death acknowledged. Sometimes I am screaming into a void.

That’s eight radio stations and two newspapers that are compromised in one way or another. This is dangerous for LGBTQ stories. And the fact that not a single local outlet, except Pgh City Paper and QBurgh, has reported on the radio station ads does not bode well for mainstream media listening to our voices.

It would have been nice to spend some time with other LGBTQ activists and perhaps get some moral support for all of this work. Work that I am not paid to do, fwiw. I’m struggling to embrace my birthday on Saturday because I feel guilty about wanting to be validated and anxious about the future. I was contacted by several people last night who said some variation on “You are now one of the only outlets covering progressive stories” and I panicked. I’m not a journalist and I can’t cover all the stories. That’s a really heavy load for a one-women blog to bear. I know all the nice things that will happen on my birthday, but I want a big surprise, a flourish, a pat on the back. I want to feel appreciated for all of this work (waves hand over entire blog) and that feels inappropriate.

I have neglected housekeeping for this blog for over a year because I’ve been so focused on Pittsburgh LGBTQ Charities (PLC). I don’t regret that, but this blog cannot exist in perpetuity on my grit and SSDI income alone. PLC does not fund blog activities. They are separate entities.

So you can support our work here:

Suggest somewhere fancy to go with my new purple dress, purse, and hair? 🙂 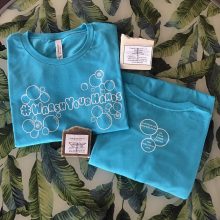 The #WarshYourHands Shirt and Soap and Snowflake Kits Are For Sale