This is a story.

After I won the 2022 Outstanding Blog award from the GLAAD awards earlier this month, the Pirates congratulated me and said that they would like to acknowledge this achievement in their upcoming plans for Pride Night at PNC Park. I was pleased, of course, assuming they would probably make a quick announcement, maybe flash a screenshot of my blog on the scoreboard.

Pride Night at PNC Park will be Friday, June 17. The charitable partner of this blog, Pittsburgh LGBTQ Charities, is one of the participating LGBTQ organizations. You can buy tickets using our link bit.ly/PLCpirates

Let me get to the chase – they asked me to throw the ceremonial first pitch at Pride Night. I did not see that coming. Not at all.

In 2004, I was part of the very first Pride Night at PNC Park after the June Pridefest was held on the Northshore. I volunteered at the GLCC booth all day then went to game with Laura and our friends, the Sarahs. And my parents were there – they sat in actual seats, not the bleachers but they were there and they came to find us and sat with us for awhile. Mike Natale, Mr. Pittsburgh Leather, threw the first pitch that night. Mike was a dedicated volunteer along with the leather community.

We went another few years. But nothing will top the exhilaration of sitting in PNC Park on a warm June night after a very long day of Pride and being affirmed.

In 2011, I began working with the Pirates to contribute a video to the ‘It Gets Better’ project. And they agreed, they were among the first teams to do so and the only Pittsburgh team. They debuted the video in 2012 on the big screen at PNC Park before a game on May 4. They invited LGBTQ youth to attend batting practice and enjoy some nice seats.

One of the youth filmed a response video.

Important to note that 2022 marks the ten year anniversary and I believe the Pirates are planning to acknowledge that milestone at Pride Night this year.

PLC decided to participate because it is important to have a representative group of sponsors claiming the Pirates legacy as informed by queer perspectives. The Pirates should be very proud of a legacy stretching back to 2004 (that I know of) that began with very grassroots, very queer community groups. And that legacy stretches much further back in the hearts and experiences of baseball fan queer kids growing up in the 60s and 70s and even earlier, I’m sure.

So throwing out the first pitch, hmmm. I know it is an honor, but I also know I am a person with social anxiety and a person who hasn’t touched a ball since an ill-fated softball game in 1994. I’m also a blogger who has criticized the Pirates. So while everyone around me was saying ‘OMG, you have to do this” … I wasn’t sure.

Then my college roomier called me and offered to lend her brother’s baseball mitt. Kevin was a very special person to me. He died far too young ten years ago. I didn’t even know he played baseball. Having hit mitt with me was just the jolt of confidence and whispers of sarcastic commentary in my heart that I would need.

That same day, I was rooting around in my tote bags, looking for bug spray. I felt something odd and pulled out … a baseball? What the heck? Then I remembered. I found it at the Fineview baseball field in August 2021 when we spent weeks trapping the #FineviewFelines. Mama was TNVRd and released to a new feeder. Papa was not found, nor was one kitten. But we got the other three babies – Horton, Logan, and Quartermaine. They are still with us – no one has applied to adopt them.

I remember kicking the ball as I was hauling my trapping equipment back from the trail to the parking lot. I picked it up as a memento, intending to give to a nibling. Into the bag it went and there it stayed until last week.

Then the Pirates told me I could have a small group with me to support me which is much appreciated. Not only will having Laura there help me cope with last minute anxious thoughts about bolting, but I can give my niblings a chance to have this once in a lifetime experience – until they grow up to earn their own chance to do amazing things.

So that’s a lot of signs pushing me to do this. Maybe the kittens will get some attention? They will not be at the game, but I’ll leave the tv on for them. Without a doubt, Kevin will be in my heart. And my lovely family will surround me.

Some other friends have donated mitts for me to use. So here’s my plan to bring this fun albeit anxious moment back around to the blog.

I asked the Pirates to put number “57” on the jersey. 57 is the number of trans folx in the US who were victims of the campaign of terror in our nation. I wrote memorial posts for each of them. I realize most people will think that’s either a reference to Heinz 57 or a famous baseball player (fun fact, 118 players have worn that number in the major leagues.) That gives me a chance to correct them. I’m going to write the names on one of the other gloves, put the ball with it, and the 2018 Pride Night cap my friends Jeff and Dave gave to me and the jersey and they will all go into the PghLesbian archive. I’m hoping the Pirates will announce why I am wearing #57 but we’ll have to see.

Keep in mind five local BIPOC trans folx were in those numbers. Two of their murders remain unsolved. So we must say their names to push law enforcement to find their killers. Maybe baseball can help?

There’s more, but I’ll save that for another post. A quick preview.

My great-grandfather, Gil Remley (1887-1961) was born and raised in Allegheny City, along what we consider the North Shore now, right next to Exposition Park. He loved baseball and was heavily involved in organizing youth leagues. In 1906, he was hired by the Pittsburgh Sun as a copy boy, literally running copy from Exposition Park to the Downtown offices. He worked his way up, still playing baseball, worked with the Homestead Grays for a bit, and eventually joined the sports editorial desk at the Post-Gazette. His career spanned 52 years. He died long before I was born, but I admit I wonder what he would think of all of this. Stay tuned …

We’d love to have you join us at the ballpark. You can buy tickets through Pittsburgh LGBTQ Charities (PLC) at bit.ly/PLCpirates. Join us to see the most unlikely person in the world to throw a first pitch. I will be glad to see my lifelong friend, the Pirate Parrot, catching for me.

Pittsburgh LGBTQ Charities is a nonprofit organization established in 2021 to raise community awareness and promote grassroots engagement for neighborhood quality of life, animal welfare, anti-poverty, and LGBTQ+ issues in Western Pennsylvania. You can donate to support PLC work via

or by donating to obtain one of these lovely yard signs 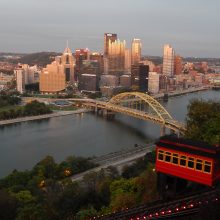 As we followed him down To the station