A few months ago,  my friend Joe Wos told me about his friend, Dale, a comic creator also known as the Stan Lee of Gay. Of course, I was interested and it turns out that Dale is coming to Pittsburgh May 11-12 for 3 Rivers Comic Con, so we set up a  chat. Dale is the force behind Sticky Graphic novels “an imprint for wordless, gay character-based, sex-positive graphic novels.”

Dale agreed to answer a few questions. This will be his first trip to Pittsburgh so I hope all the sex-positive, graphic novel fans will make him feel welcome. I’ve never been to a Comic Con so this might be my first. 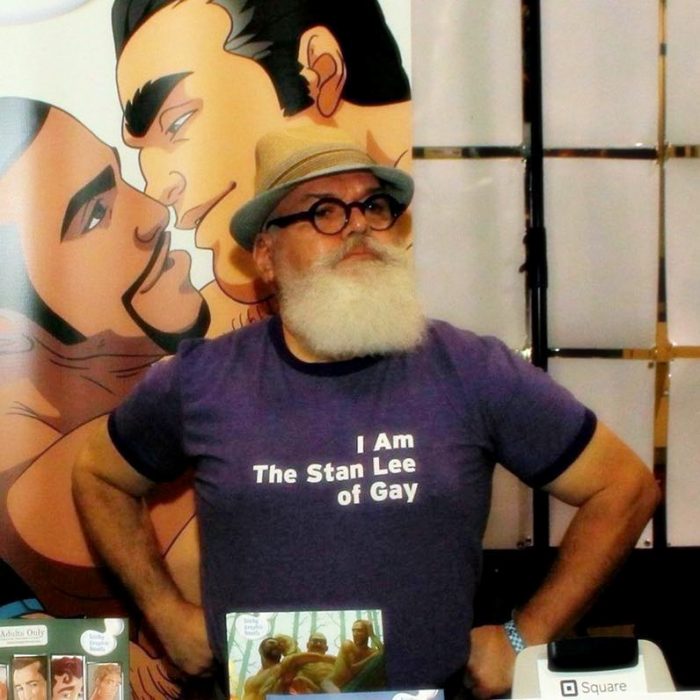 How do you describe your identity? I am gay beardo Puerto Rican comic book geek and writing professor. But that’s just this morning.

Please tell us about your very first impression of Pittsburgh: Is there anyone with whom you’d like to collaborate? This is my first visit to Pittsburgh. Actually, one of the reasons I am exhibiting at 3 Rivers Comicon is to meet local talent. That aside, I would love to get a back cover blurb from Michael Chabon but I don’t know him from Adam.

Your body of work includes sex positive content, gay erotica graphic novels, and other material we don’t typically expect at Comic Con. What have been the rewards of creating that content and what have been the costs to your career? Last weekend at ICE CREAM (the Iowa City Expo for Comics and Real Eclectic Alternative Media), a con attendee told me: “Your work is important”. This made me cry. I’ve received letters from folks who were inspired by Sticky Graphic Novels to go out and date again and then found love with another man, people who were stuck in companionate marriages who had forfeited on their sexuality in exchange for security, etc. Knowing that our hard work is having the intended effect of causing gay liberation is spectacularly affirming. Also, a good chunk of our audience are women who like gay erotica and family and friends of gay men who buy Sticky Graphic Novels as gifts for their gay male friends and family. Someone once thought of buying a Sticky Graphic Novel for their gay boss but they heeded my warning that it would be a contextually-inappropriate gift until they left for another job.

Say, we have been unable to get distribution to comic stores.  I had to apply five times to get in to C2E2, the big local con in Chicago where I now sell 110+ hardcovers every year.  The folks who run CAKE in Chicago don’t consider me part of their “alternative comics community” even though erotic comics, fine art comics and sexual minority comics are textbook alternative comics genres. I fulfill their charter to host comics creators who are local, underrepresented, and first-timers but they always have the same two local white gay guys while rotating coastal white gay guys who have exhibited at San Diego Comic Con for years or have won, say, RuPaul’s Drag Race, which is hardly alternative culture at this point.  Meanwhile, I have no problem getting a table at indie cons outside of Chicago.

What do you think the tremendous success of the Wonder Woman, Captain Marvel, and Black Panther movies, all of which upend the typical cisgender heterosexual format, says for the future of LGBTQ superheroes and characters? That just means that it’s safe for movies to have characters that aren’t fully heteronormative but not so much that aren’t completely disruptive of norms. Given the history of LGBTQ content being excised out of superhero movies before they are released — the Black Panther movie was de-lesbianized — I am not holding my breath. I expect Hercules’ bisexuality to be erased for his movie appearance because China is a big market for capey capers and they are not fond of non-conformity.

You’ll be at 3 Rivers Comic Con this May. For someone who has never attended a Comic Con, what will we find when we find your exhibit? “Exhibit” makes it sounds like it’s in the Smithsonian! It’s more of a sales table at a comics flea market. See pictures below: 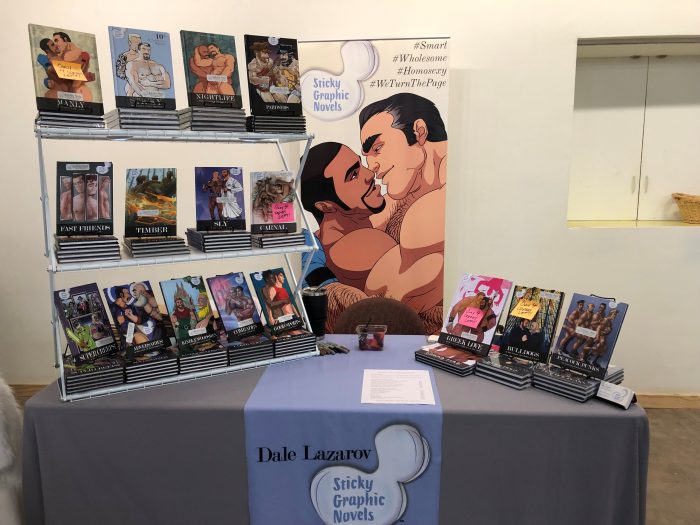 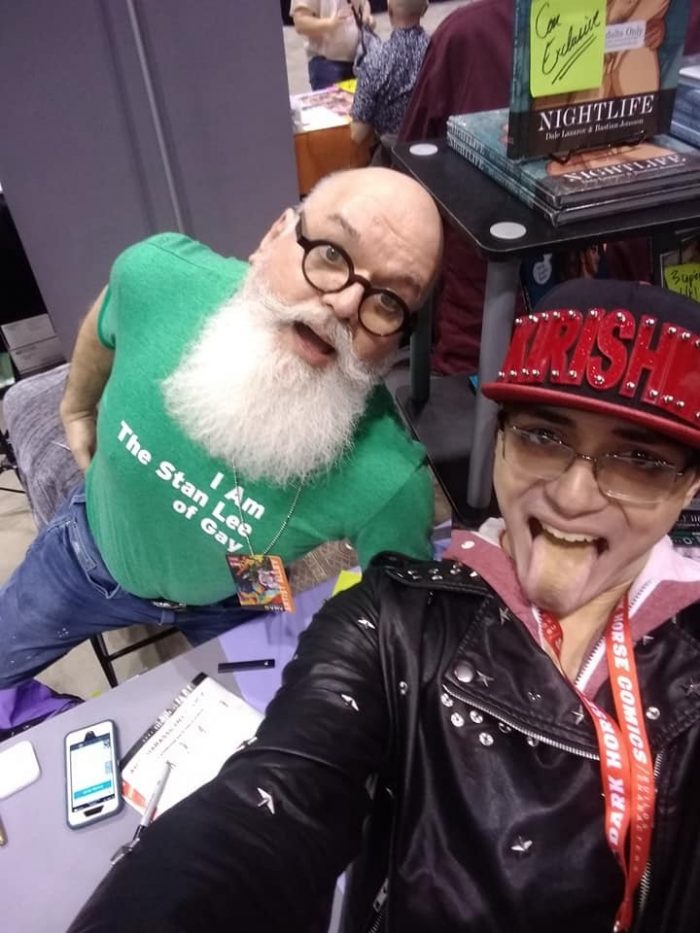 Who are some of the younger openly LGBTQ artists that our readers should be following, but might not know about? Check out work by Vita Ayala, a non-binary Puerto Rican comics writer.

Where can readers find you on social media? Where can readers purchase your work?  To buy my work, come to meet me at 3 Rivers Comicon in Pittsburgh (http://3riverscomicon.com/) on May 11 – 12 or visit http://www.StickyGraphicNovels.com/ . Comic fans can find me on all social media but I’m most active on Facebook.

Thank you for the boost, Sue!