In mid-January, Carnegie Stage is hosting a tribute to Shakespeare on January 19 and 20, 2019.

All About Will: Two One-Act Plays, including Friended by Shakespeare Written and Performed by Charles David Richards and Mrs Shakespeare, Will’s first & last love Written, compiled and performed by Yvonne Hudson. Tickets range from $5 to $15.

We had a chance to talk with Yvonne Hudson about her play.

Your Affiliation With This Production: I wrote, compiled and perform Mrs Shakespeare, Will’s first & last love. In January 2019, I am presented by OneTheatre Group in a double bill, All About Will, with Stoney Richards’ solo show Friended by Shakespeare. Our shows actually take place on the same day–Will’s birthday but late in his life–with Stoney’s character a player in Will’s company in London and my character at the Shakespeare’s home in Stratford-Upon-Avon.

How do you describe your identity? Renaissance woman, leader who listens, artist and peacenik who is committed to my life partner, to making a positive difference for others, and to promoting inclusion and welcoming in work, faith and artistic communities.

How did you first learn about Anne Hathaway? I became more aware of Anne Hathaway during my study of Shakespeare works and his biography in graduate school at University of Pittsburgh’s Department of Theatre Arts. I was intrigued because there was so little written and known about her.  Initially, it was clear that the male-written scholarship cared little about the woman and minimized her role in his life as they were apart most of 23 years in the middle of their long marriage.

I grew up familiar with some Shakespeare plays and my family loved poetry. I actually had a speech impairment when I began school, but four years of speech classes and constant singing helped my diction. By the time we were memorizing speeches and learning about the plays, I was hooked.

Why is she most frequently referred to as Anne Hathaway versus Anne Shakespeare?  Anne Hathaway’s Cottage is somewhat better known that the woman who grew up there. Her family’s thatched roof home is a leading tourist and heritage site in Stratford-Upon-Avon. It was part of the Hathaway’s Hewlands Farms where she continued to care for younger siblings after her parents’ passed. Some people inappropriately make much Anne being eight years older than Will. Contemporary records indicate many women lived at home as long as possible to care for their families then married in their 20s.

You created this show over 30 years ago. That seems like a very long time for any show to remain relevant. How do you keep it fresh? Because it’s really no longer the same show when I returned to it while living/working in New York).  The concept of my show has remained relevant as virtually all of Shakespeare’s plays are performed around the world every year.  They continue to inspire other words and updates in film, stage and music.

My own show has certainly changed and been developed in many ways. The first version was a simple grad school project in which I sang a lot as I was studying voice at the time. When I returned to the piece as part of a women’s solo show festival in New York, it was really a different play.

Most significantly, the piece is always informed by my own life experiences–passing of loved ones, relocations, and even major events, like the September 2001 attacks. I added the St. Crispin’s Day speech from Henry V that year and performed my expaneded two-act version for a South Dakota booking in July of that year, but the show was much different at a Tower of London in conference late September 2001 and again in April 2002 in lower Manhattan when the memorial towers of light were shining over the neighborhood each night.

My research about Anne and the family in Stratford during four visits there was important. I wrote the poem that opens the show this year on the train leaving Stratford on one of my trips in which I walked the distances that Anne and Will would have known. More recently, new archeological findings have continued to tell the couple’s story, so it seems there is always some new to explore despite four centuries!

The speeches and sonnets I include vary. My 50-minute version is featured at Carnegie Stage, Jan. 19 and 20. Later this year, I’ll be presenting 75-90 minutes in some bookings to be finalized.

How do you keep new generations interested in Shakespeare? Why is it important that we do so?  I maintain that the same reasons that actors savor the text of the plays also place Shakespeare at the heart of the English language and how we still speak today. Speaking, writing, rhetoric, and poetry are all informed by facility with his text. For example, Abraham Lincoln loved Shakespeare and the King James Bible, it’s clear those Renaissance texts influenced his writing.

Likewise, the stories and themes in Shakespeare’s works are timeless but also relevant for all ages. The experience of live performances and also performing Shakespeare makes it come more alive for most young people than just reading it in classes. How to teach Shakespeare is a focus for many theatres supporting teachers with training and resources. Finding a way to present–whether its rap or song or acting–gives young people options to dig into the works and relate to characters.

When I once taught a class to teens in an alternative diploma program in Long Island, it was wonderful to see how they related to the plays. They got that Hamlet could be contemplating taking his own life with “to be or not to be…” when translating the speech into their own words. The students related to the young characters and lovers in A Midsummer Night’s Dream and Romeo and Juliet. It was refreshing that kids who might be perceived to be less likely to “get” Shakespeare indeed felt the stories were about them.

Importantly, the plays provide language, writing, poetry, and speaking skills for those who work with them. A student who can learn and present a sonnet or a speech–with the positive coaching of an actor or teacher–can take that ability with them for life.

Why did you choose a one-woman show format? I was first mesmerized by Julie Harris portraying Emily Dickinson in The Belle of Amherst, a two-act solo show. I was long fascinated with one-person shows and an actor’s ability to present a character while alone on stage. My department at Pitt required graduate actors to write and present a solo show, so my project was added to that event program. When I couldn’t find enough information to create my piece about Anne initially, I created another solo piece as I had to fulfill a course commitment. Peter Harrigan directed that piece and I gained the confidence to carry on with the Shakespeare idea. The piece changed again when I took part in a one-woman show festival, Womenkind, in New York City. During two seasons I presented on programs with others who had original historical, autobiographical, and comedic pieces. It boosted my focus on this work. Performing solo is a amazing experience and I recommend all actors develop a solo show of their own. In 2006, I self-produced and acted in The Belle of Amherst, staged by Helen Meade who had been my director for Mrs Shakespeare in Pittsburgh.

Conventional wisdom is that we know very little about Anne, an incongruity with her husband’s prolific writing. She’s been described as a “wife-shaped void” to project modern understandings. Does mining this relationship help us understand Shakespeare better or help us understand women’s experiences better? I set out to not only find out all I could about Anne but also to find evidence of Shakespeare in his own works. I believe the members of the whole family are reflected in the plays. It’s clear she “kept the home fires burning” while Will worked in London and he returned to her and their home, New Place, at what is perceived as the end of his theatrical career. They actually had a “commuter marriage”–not uncommon then or now when a spouse has a focussed skill and needs to work away from home. In Elizabethan England the hazards of travel, plague and fire made life and distance much more challenging. Little is documented about many lives as compared to what we know about others’ lives today. It’s likely the Shakespeare and Hathaway families knew one another. While Anne was pregnant when they wed, that was not unusual either. Will was male so the more educated of the two. I take the dramatic liberty of having Anne learn to read so she can better understand her husband’s work.

I have been heartened to see the real Anne emerge more clearly in recent academic research that aligns well with my own. I didn’t miss anything. I believe I was the first to develop and sustain a solo play about Anne, but there are endless possibilities on how to play her dramatically.

What is something about Anne Hathaway that will surprise the typical person? Many people only know that Shakespeare left the “second best bed to Anne”. Old scholarship has you believe that this is a slight  The bed bequeathed to Anne by Will was likely their marriage bed and likely the “nicer” bed their guests would sleep in. His will was not a slight, but typical for the time as a woman could not own property.  Anne likely wanted for nothing except more time with husband and their son Hamnet, who died when he was only 11 years old, propelling Will to write the tragedy Hamlet. Ironically, Hamnet was a twin and it was somewhat miraculous that he, sister Judith and Anne all survived childbirth.

How can readers connect with you on social media? 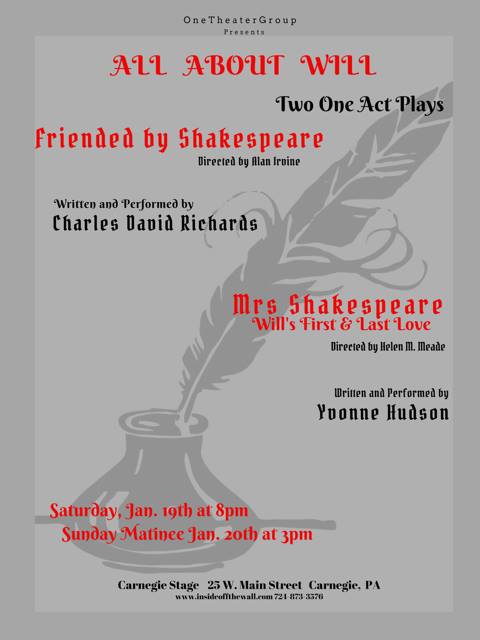 Is there anything I should have asked?  Maybe: How “solo” is a solo show, really? (LOL!)

No solo show happens “alone”, so I’d have to say I may have never continued this project without the support of my partner Lynette Asson. She’s been my “Johannes Fac Totum”– schlepping my hooped costume and many props  as far as the Tower of London for many years. It’s sure nice to have a hairdresser and someone to lace the back of my corset, but Lynette working with me and supporting me as I tell Anne’s story is a truly wonderful part of this journey–a labor of love in every way!

Many stories are hidden in history and literature, so I’ve considered telling Anne’s story a personal mission to represent the resilient and strong women who have carried on despite overwhelming obstacles. My own grandmother, who raised her children alone when my grandfather couldn’t cope upon his return from World War I, is an inspiration for my Anne.

Invest in our work with a sustaining monthly donation to continue reading great interviews like this with local creators.