Carnegie Stage is hosting a one-woman show: Etty – the Play, an artistic experience that offers us another glimpse into the Holocaust. The show runs Thursday February 7 – 10, 2019. Tickets start at $5.

Etty Hillesum’s life ended at Auschwitz when she was only 29 years old. In the play, Etty, drawn entirely from Hillesum’s diaries and letters of 1941 – 1943, we meet a remarkable young Dutch woman: insightful,determined, poetic, sensual.

I had the chance to interview the playwright and actor who brings Etty to life, Susan Stein, about her work and the performance. 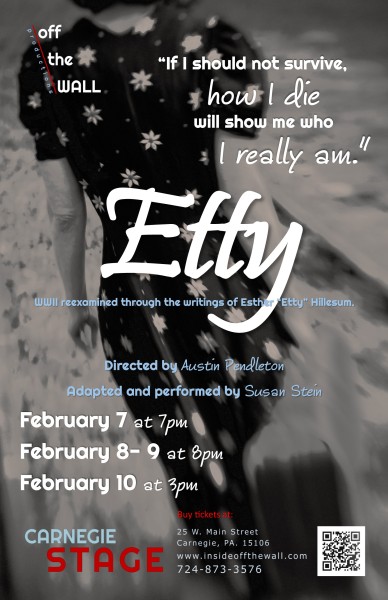 Your Name: Susan Stein
Your Pronouns: I, she, her, hers
Your Affiliation with the production: I am the playwright and performer

How do you describe your identity? I am a working actor and teaching artist. I am Jewish. I grew up poor, working class and moved up to middle class. I am short and I am a woman.

Please tell us about your very first impression of Pittsburgh: I fell in love with Pittsburgh when I drove through the tunnel. It felt like I was coming out of a womb. The bridges are beautiful, the city is magical. It’s gritty and industrial and beautiful.

What Pittsburgh creators – writers, musicians, poets, etc – have influenced your work? Is there anyone with whom you’d like to collaborate? Ginny Wall Gruenert, Alan Stanford and Karla Boos inspire me with their artistic courage and integrity. Each of these theater artists stretch themselves, their colleagues and their audiences. These directors stretch me as an audience member to imagine, think and feel differently. I would love to collaborate with all of them. I would love to work with Emmai Alaquiva and witness his imaginative and thoughtful process that I have heard so much about. I have been grateful to work with Professor Norm Conti the past few years as part of the prison work he does. Norm’s tireless energy and passion for justice and reform are contagious. Working in prisons with Norm and being part of how men shape their words is profound and humbling. I can’t get enough of working with Norm and learning from him and the men in prison.

Etty is based on the writing of Esther “Etty” Hillesum, a young Jewish woman living in Amsterdam who was killed in Auschwitz in 1943. Please tell us a little about Etty’s life story. “Etty” is adapted from the writings of Etty Hillesum more than it is based on them. My play isn’t about Etty’s life story. Although everyone’s life story deserves to be told, particularly a person who lives and experiences an atrocity, I wanted to tell the story of Etty’s diary, not the story of her life. My play is the story of her becoming herself in the midst of a catastrophe designed to destroy human being’s individuality.

Hillesum’s diary is the story of a young woman trying to “harness” her own “inner chaos” as a way to understand the chaos of the world. Etty’s life story is a story we know, the story of an assimilated Dutch Jew who moves to Amsterdam after completing university and is murdered in Auschwitz. That story deserves to be told, but it is not the story I wanted to tell in my play.

Intersectionality is how to understand Etty Hillesum. She insists on not being defined by her circumstances (the Holocaust, yet unnamed), by her gender, by her religion, race, age, class, sexual orientation, political leanings. And yet she identifies herself as a woman, as a Jew, as a 28 year old middle class Dutch student. She is a truth seeker and digs deeply into her own self to work herself out.

A lot of us frame our first person narrative understanding of the Holocaust through the writings of young Anne Frank or the narrative of survivors like Elie Wiesel. How does Etty’s perspective differ from these more well-known testimonies? Unlike Anne Frank, Etty Hillesum is a mature woman with an active sexual appetite and life. She approaches life with great sensuality and, for most of the diaries, is in the midst of two love affairs. Hillesum’s writing is not precious. She is flawed, complex and beautifully human. Unlike Anne Frank, Etty refuses to go into hiding, so her writings are bearing witness to life on the streets of Amsterdam as well as in Westerbork.

Elie Wiesel’s writings have the power of reflection and the distance of time. Anne Frank and Etty Hillesum’s diaries and letters are spontaneous, intimate, fragmented. Wiesel is writing for a larger audience. Etty Hillesum and Anne Frank write themselves as women. Their writing explores their bodies, their menstruation, cramps, breasts, longing, and sexuality. They are interested in themselves as women and that relationship to other women and to men.

Is it fair to say that Etty’s writing invites us to consider the individual moral culpability and humanity of everyone involved in the Holocaust as a way to explore how otherwise decent people commit evil acts?  Yes, Etty’s writing invites us into the machine of the Holocaust and how that machine was made up by individuals. Hillesum refuses to turn it into a good and evil scenario. She is committed to “rooting out the hatred” inside her own heart as the next step in “building a whole new world.”

Was Etty a feminist? Although Hillesum never uses the word “feminist,” she believes in equal rights for men and women. Her first three diaries focus on exploring what it means to be a woman on one’s own, apart from a man? She considers her own sexual and sensual desire for a man, her “greedy” need to possess a man and be possessed by one. She uses her therapy to find her physical and psychological strength but remains aware of her longing to be “tamed” by a man. Her awareness of her longing and greed ultimately makes her stronger and more independent.

20th century history is alive and well as this country grapples with the ongoing legacies of white supremacy, totalitarian authorities, and confining people to cages. How does Etty’s individual journey prepare us to wrestle with modern systemic manifestations of similar evils?  Etty understood human nature and our willingness to take the “easy way” and tilt towards “hatred” and “barbarism.” Her individual journey is a commitment not to hate, not to demonize her perpetrators and to nurture her inner life and life her life fully on her terms however long it lasted. That journey invites us all inside ourselves to do the same.

Etty used the term “queer” with a very mid-century meaning, but her beliefs and choices around her sexuality reflect a very contemporary queer sensibility especially her polyamorous relationships. How does intersectionality help us understand Etty’s identity? It is perhaps Etty’s contemporary sensibility that kept her diaries from being published for almost 39 years. And even when they were published, they were heavily edited and abridged with some of her sexual and intimate relationships excluded. Intersectionality is how to understand Etty Hillesum. She insists on not being defined by her circumstances (the Holocaust, yet unnamed), by her gender, by her religion, race, age, class, sexual orientation, political leanings. And yet she identifies herself as a woman, as a Jew, as a 28-year-old middle class Dutch student. She is a truth seeker and digs deeply into her own self to work herself out. She seeks God (whom she refers to as the “deepest part of myself, which for the sake of convenience, I call God.”) in the Koran, the Bible, the New Testament, the Psalms and Rilke’s poems.

Please tell us about the first LGBTQ person that you knew and what impact they had on your life. Her name was Merrie and she was in one of my classes at college. We became friends. More than her asking to kiss me or being attracted to me, was her identifying herself with such open boarders. It terrified me to feel attracted to her. It terrified me to not keep a strong wall around myself as a straight woman. Merrie’s sharing who she was with me stretched me in ways I did not know were possible. And there was no going back.

What other one-woman shows would you recommend for our readers? Anne Stockton’s “The Speed Queen”

Carnegie Stage is just outside of Pittsburgh and has a lot to offer theater goers, including free parking, affordable and delicious nearby restaurants, and a mission to make transformative art accessible to the community. Tickets for Etty are available online. We’ve seen some terrific performances there. I’m sure this will be another.