On Saturday March 19, 2022, a 19-year-old Asian-American autistic trans woman living with mental illness issues was murdered by her father (filicide) in their family home. Her father then died by suicide using the same gun. Her name was Kathryn (Katie) Newhouse. Yesterday, friends and neighbors organized a candlelight vigil to honor her life and acknowledge her death.

Her friend Kristen Mork delivered comments that they graciously agreed to share here. These comments have not been edited. ~ Sue

My comments from the vigil last night…

I am here today to speak to the life of Kathryn Newhouse. I plan to share my emotions regarding this tragic event, which based on conversations with her friends, are not unique to me. To avoid any surprises along the way, I will speak to my grief, my anger, my fear, and my guilt.

I was reminded of Kathryn just last night when I saw a movie about databases. I expect she would also be looking forward to the sequel.

If you had even passing familiarity with Kathryn, you would know that she had a love of IT jokes like that. Kathryn and I primarily interacted online because of the pandemic. Despite the clear differences in age we had much in common.

We shared a love of IT, a passion for transgender rights, and we adored fashion. We both leaned into flowing lines and fabulous hair. Her sense of style seemed effortless and I learned from her at least as much as the other way around.

Together we celebrated the milestones along her transition. My grief stems in part from knowing that she will not be able to take the next steps.

I knew Kathryn as someone who was openly appreciative of anyone who took the time to interact with her. She was warm and giving and complimentary

.I knew Kathryn as that rare individual who combined the intellect needed to succeed in IT with the empathy to know that success derives from building community. And Kathryn was a community builder. I grieve because the world will never know what gifts she would bestow upon us.

Finally, I grieve because despite that warm and tender heart, Kathryn kept much of her pain private. Which brings me to anger.I am angry at the circumstances of her death. I am angry that she was murdered for being an autistic transgender person.

I am angry that the narrative has been contorted to insinuate that this murder was in any way her fault.

There is an implication that Kathryn pushed too far. That living with her mental health issues was a burden that could push anyone over the edge. That her father was suffering because of who Kathryn was. I expect that some of these comments were made in grief, and I understand the power grief has.

And I am scared. No. I am terrified. Since Kathryn’s murder, I have learned of another transgender girl. I’ll call her Jane. Jane is roughly half Kathryn’s age. And Jane knows that she is a girl.

One of Jane’s parents understands. The other does not. That parent is convinced that Jane is a little boy. After interacting with this parent, Jane comes home and beats her head against the wall.

The authorities know what is happening. The court has appointed a guardian. The judge has expressed the mildest of concern: Let’s just see if it gets worse. I know what worse means in this case. And I am scared.

I am scared of a system that treats our murders as collateral damage in a culture war.

Finally, I have experienced guilt. I feel like there’s something I should have been able to do prevent Kathryn’s death. I know many of you feel the same way. I am here to say that your guilt is natural, it makes you human

.But you do not deserve that guilt. It is not your guilt to bear. The murder of Kathryn lies at the feet at the man who pulled that trigger and the system that shrugged in response.

Own your grief. Own your anger and your fear. But let go of your guilt. And, if you can, celebrate the gifts we did receive from Kathryn.

If you or anyone you know is experiencing violence at home or from family members, please contact Family Violence Prevention and Services 1−800−799−SAFE(7233) or TTY 1−800−787−3224 or https://www.thehotline.org/ You deserve not to be hurt by people who are supposed to love you. 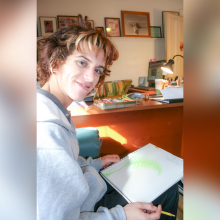