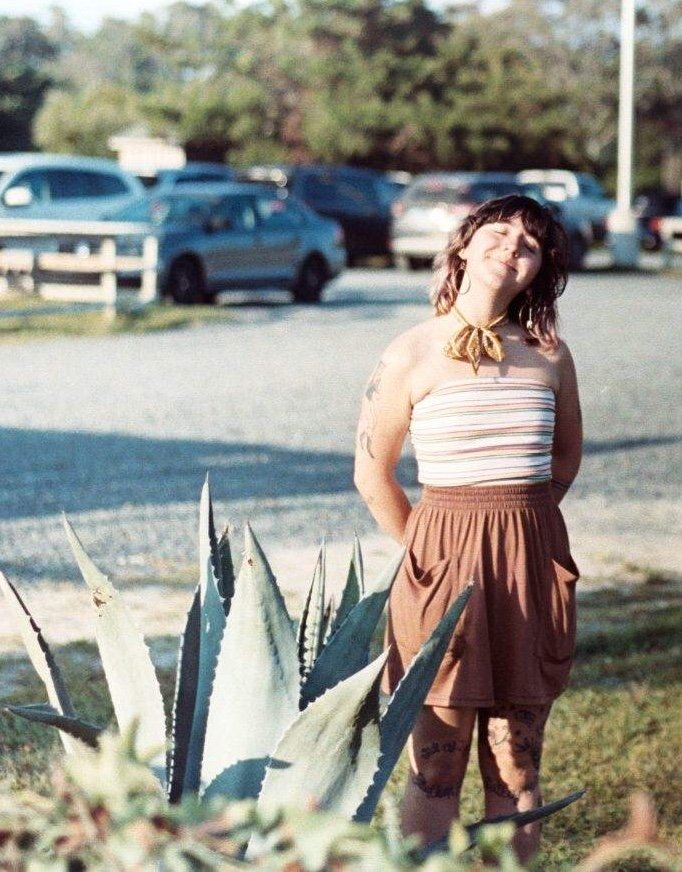 I was stoked to learn that my newspaper home, The Pittsburgh Current, had brought Meg Fair on board FT to cover the ‘LGBTQ beat’ as well as to provide music and other coverage. They have done some great reporting and I think their openly queer identity is very important to this role.

Note – I use LGBTQ beat in this context because one goal of media is to be accessible and most people know what that means. I also believe that when owners and publishers and editors are cishet allies, we need to be mindful of who uses what language. I actually think having a queer person on this beat is a radically queer action and you might agree (or not) after reading Meg’s responses. The Current uses the GLAAD media style guide and allows most of us to be flexible with language.

Disclosure – I have been a LGBTQ editorial columnist for the Current since June 2018.  That’s specifically why I asked to do this interview.

I identify as queer and genderfluid. My gender expression varies wildly and I move across the spectrum of masculinity and femininity very quickly. I’m very much queer in who and how I love, but also politically queer, queer as in fuck you. Pushing against arbitrary gender and sexuality norms is very important to me.

Tell us about the first LGBTQ person that you knew and what impact they had on your life?

The first LGBTQ people I knew were my aunts. My Aunt Denise and her wife Lynn were incredibly close to me, and I grew up with this beautiful example of gay love. They were both empathetic school teachers who were part of collective bargaining for their teachers’ unions, and they also went above and beyond for their underserved students. Their home was so full of love and laughter. I was so fortunate to be able to see a future for myself by witnessing the life they lived. My Aunt Denise passed away this year after a very long and difficult battle with ovarian cancer and her passing was very hard for me–Lynn survived her and even after being together for 30+ years and married for several years, Lynn still encountered some weird initial restrictions in what she could and couldn’t do in the funerary process.

You recently assumed coverage of the ‘LGBTQ beat’ with the Pittsburgh Current, among other responsibilities. Tell us what that means and how it impacts the paper both in print and online.

Because the Current is new, the LGBTQ beat has a lot of flexibility to it. The way I envision it, I want to dive deep into stories about LGBTQ life, from the rallies and activism and issue-based stories to the art and music that the LGBTQ community produces. I want to tell queer histories and I want to highlight the people who are really pushing and advocating for our community now. I’m hoping that every issue and more stories online will highlight the vibrant LGBTQ community in Pittsburgh–its highs and its lows and its in-betweens.

I also want to normalize writing about LGBTQ folks in general. I want to use my position as a gender non-conforming person in a newsroom to make sure not just LGBTQ stories are thoughtfully reported from a gender and sexual identity perspective.

A few other regional media outlets have LGBTQ beats, formally or informally, but not every outlet has an openly LGBTQ person in that role. Do you think that is a significant factor in the role and the created content? Why or why not?

I think it definitely makes a difference. If you’re a part of the community that you’re covering, you oftentimes have the community’s general interest and well-being in mind, even when you’re telling difficult stories. Sometimes having cis and straight reporters cover LGBTQ stories is just fine and well done, but sometimes it reads like someone parachuted in to a new world and is writing from a weird, distant anthropological perspective, which can be really alienating. I feel like being in this role is important to me personally

What are some of your own professional highlights as a journalist?

One of my proudest moments in journalism was being able to share the story of Esai, a wonderful (then) 12-year-old genderfluid drag queen in Pittsburgh. It caused problems with the higher ups at the publication I was writing for at the time, but at 22 years old that was the story that earned me a spot as a finalist for the Golden Quills. It meant the world to me to not only tell the story of a young person who is the future of our community, but to be recognized for telling that story.

What journalists and media professionals are on your radar? Do you have mentors or role models? Any ‘must-read’ folks?

I’m hugely obsessed with Lucy Diavolo, the news and politics editor at Teen Vogue, and the prior news and politics editor Allison Maloney is a very important friend and mentor to me as well. I also consistently love the work of Kim M Reynolds, who was reported for Teen Vogue, the Black Youth Project and beyond. Her voice is so strong and she is an incredibly thoughtful, intentional writer.

As for mentors, I’ve been so very lucky because Katie Blackley took me under her wing during my time at WESA. Her journalism instruction made me a stronger reporter, but she also made me feel seen and supported as a young gay reporter who was really uncertain about my place in the industry.

I also want to normalize writing about LGBTQ folks in general. I want to use my position as a gender non-conforming person in a newsroom to make sure not just LGBTQ stories are thoughtfully reported from a gender and sexual identity perspective.

Looking at popular culture and mass media, are there any fictional depictions of women and/or queer folx that resonate with you?

I’m a huge fan of Steven Universe, as it’s a really pure and special show that depicts a lot of queerness in a really wholesome way. I also love pro-wrestling, and in that world Sonny Kiss, Candy Lee and Effy are three important queer icons to me.

I grew up in the 70’s & 80s in a family that watched the local and national news every single night as well as subscribing to multiple newspapers. Was media consumed in your family while you were growing up? How did that influence you?

My parents subscribed to the Tribune Review and we watched a decent amount of TV news. I grew up a digital native, and so I read a lot of music journalism online. Weirdly enough, my parents aren’t super passionate about the news, I’d say even apprehensive about most journalism, but because of that I kind of found my own way into the world of journalism and consumed what content caught my eyes. I also don’t really consume any TV news as an adult, but I still like to keep up on the local content about Westmoreland County from the Trib.

You also cover music for Pittsburgh Current. What’s the most underappreciated music resource or venue in Pittsburgh?

That’s a really good question! I honestly think that the most untapped resource in Pittsburgh is a self-built community! The fragments of the scene that seem to thrive the most are the ones with a welcoming community that helps each other make flyers, print tees, record, sell cassettes, etc. I’d love to see more collaboration within Pittsburgh creatives.

What advice do you have for young queer folks who are interested in journalism careers?

Journalism is a trade skill–while getting a well-rounded education can help open your eyes and prepare you to cover a wide variety of things, it’s definitely a skill you can learn from a mentor if you can’t afford college. It can be a really lonely thing, being the lone queer in your newsroom or classroom, but it is imperative that a wide variety of LGBTQ folks be a part of newsrooms all around the country–small town, big city and everything in between. Our incredibly diverse voices and experiences are valuable to newsrooms. Period.

What does Pittsburgh Current bring to the region that’s unique and valuable?

The Pittsburgh Current kind of has a blank slate, and as a result there’s an opportunity to tell really alternative stories about radical people who are really doing work to make a positive change in the city and the communities within it. I think the Current can really push the envelope, and I hope to be a part of that pushing.

You can find me being a tiny queer gremlin on Twitter (@megdfair).

You can follow Meg’s reporting for the Current here.

Fat, Gay, & in the Way: My latest for the Pittsburgh Current

‘Brewed on Grant’ is on my Pittsburgh blogging bucket list