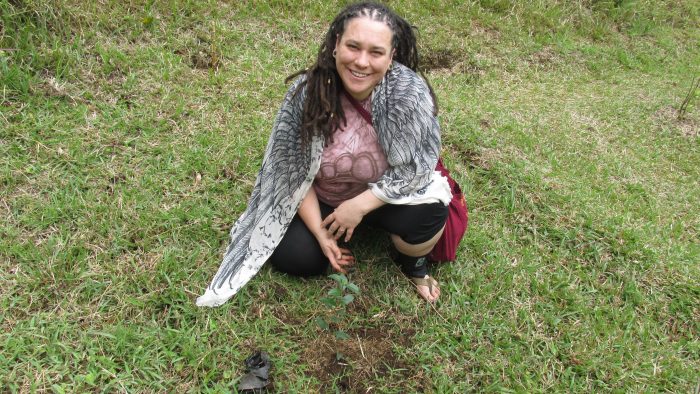 How do you describe your identity? Bisexual/pansexual, polyamorous

Please describe your coming out experience. Where did you find support? What challenges did you face? I played with a female friend my first year living in Pittsburgh. The first person I came out to was my boyfriend at the time. He was very supportive and encouraged me to pursue my sexuality. He never saw my bisexuality as a threat to the relationship. I came out to my parents several years later and their support was very passive. I was not in a relationship at the time and they didn’t seem to think my sexuality was relevant. They were very supportive when I dated a woman some years later but at some point my father asked why I couldn’t be attracted to just one gender.
The biggest challenge I faced was coming out to myself. I was very surprised, scared, and ashamed of my attraction to females at first. I didn’t know how to respond to my emotions and was scared others wouldn’t know how to respond to my sexuality. My new college friends were very supportive and provided valuable guidance, friendship, loyalty, and love.

I came out as poly when I first started dating my current spouse. I have always been open but have never dated more than one person at the same time. My parents always seemed supportive but now that I am starting to date, my mother told me I shouldn’t be dating anyone and she doesn’t want to meet them because I’m married. I haven’t been able to anticipate a lot of the challenges of being polyamorous because I haven’t had multiple formal relationships at once. I think people may be confused if I talk about someone I am dating and they know I am married but I don’t know how they will respond.

How would you describe yourself NOW in terms of “being out”? Fully out

We need your voice in this project. Complete the online Q&A now, please.

Tell me about the first LGBTQ person whom you met. What impact did they have on your life? I cannot recall.

Past or present, favorite LGBTQ character or creator in television, film or literature? Please tell us why. Laverne Cox, she is so fierce on Orange is the New Black and the first super famous transgender movie star I discovered.

Describe your geographical community. My current geographical community is rural, low median income, mixed race and ethnicities. I do not see signs that is LGBTQ friendly and it is a high crime area so sense of safety in general is low. Other than myself, I only know of one person on my street that identifies as LGBTQ.

The community I grew up in was suburban, middle income, and largely white. It is not LGBTQ friendly, I have seen Trump flags, nazi symbols, and weaponry within one mile of my parents neighborhoods.

Describe your local or regional LGBTQ community. I am not sure who my LGBTQ community is. As a bisexual person I never felt part of the LGTQ (or hetero) community, in Pittsburgh, at conferences, work, etc. I get treated different when people find out I am bisexual and dating a cis-male. My sexual orientation is often wrongly assumed based on the gender of the person I am in a relationship with, and when in a relationship with a cis-male I feel I have to list reasons why I am bisexual to some members of the LGTQ community. When I was in a relationship with a female I noted people in the LGBTQ community treated me different, and were joyous to discover I was “actually” a lesbian. I work in a LGBTQ health care center and staff members continue to say they are surprised I am not straight because I am married, over one year working there. I do have LGBTQ friends throughout the city, mostly that identify as bisexual or queer. I recently joined a BiPgh Facebook group and am looking to attending more of their events.

Have you ever experienced discrimination based on your identity? Specifically, in a job setting, when applying for housing or while in public.  No discrimination in work or housing. Inappropriate things in public due to my perceived sexuality but never refusal of services, aggression, or hate.

Have you experienced microagressions based on your identity? Think everyday indignities & slights that you experience, but would not characterize as discrimination. Please describe in your own words. I experience a lot of micro-aggressions doubting my sexuality. Since I am currently married to a cis-male people assumer I am straight. The most frequent and hurtful micro-aggressions usually come from people that identify as LGTQ. It seems hetero people are afraid to say anything at all and just avoid it. I frequently hear people say sarcastically, “Oh, I didn’t know you were bi.” Some people challenge my bisexuality until I say my last relationship was with a woman and/or I am polyamorous. I generally don’t spend a lot of time in public but sometimes hear homophobic statements because of the assumption I am straight.

Tell us about your access to health care in Western PA. Has it been LGBTQ competent (or not?) I actually work at a LGBTQ health center so I know most health care is NOT LGBTQ competent. The University I attended did not provide any sexual orientation/gender identity training for health care providers and they did not support me as a bisexual student. My current PCP does not provide LGBTQ competent health care and I did not disclose to him that I am bisexual and polyamorous because I personally knew him before he was my PCP. He would still treat me well but it is not a conversation I am interested in having due to his Catholic beliefs and our previous relationship. I was out to my previous PCP but had to find a new provider after he was killed in a shooting. I do go to a LGBTQ health center for STI testing.

Are there issues impacting your LGBTQ neighbors that aren’t visible or part of the local dialogue? Bi-erasure.

What would you like to see elected officials do to improve life for LGBTQ Pennsylvanians? Create public housing specifically for LGBTQ people, include LGBTQ education in schools, allow ID gender change without provider signature, ensure coverage for transgender medical care under all health care plans

Please share a lived experience, anecdote or fact about life as an LGBTQ person in your community. Regardless of my relationship status or the gender of the person or persons I am in relations with I will always be bisexual. I identify as bisexual because it means attracted to more than one gender but a lot of people don’t realize that and think it means attracted to two genders, which is not true. Because of that I identify as bi/pansexual to help people understand.

Beyond discrimination, what other barriers create challenges for your LGBTQ neighbors?  Access to healthcare, job security, lack of LGTBQ social activities without alcohol, substance use disorders, lack of treatment for methamphetamine

What is your greatest fear for the LGBTQ community in Western Pennsylvania?  Discrimination at school, work, health care settings, etc. that continue high rates of mental illness, substance abuse, low income, and decreased life satisfaction. That the LGBQ community will not accept, embrace, and uplift transgender and non-binary folx as they should.

What is your greatest hope for the LGBTQ community in Western Pennsylvania? My highest hope is that all members of LGBTQ community will be seen as equal members of society that provide value to the world. Specifically transgender and non-binary folx will be able to live free from discrimination, aggression, violence, and hate. That the LGTBQ community will continue to be resilient and strong and unite to provide community members access to LGBTQ health care, housing, and social services.


What pieces of local or regional LGBTQ history would you like to preserve and why? Not sure, I don’t know much LGBTQ local history.

What can allies do to support your LGBTQ community? Understand LGBTQ culture more, so read books, watch films, attend events, and make friends with sexual and gender minorities. Say something when someone that know has homophobic speech or actions.

What motivated you to take part in this project? Having a voice as a bisexual person

Finally, what question should I have asked? Please also share your answer. How do you define your gender and sexuality? I define my gender as female (cis) and bisexual/pansexual. I am also polyamorous. 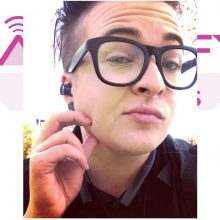 Jess, 22, is a Poly, Bisexual Woman in Pittsburgh #AMPLIFY