The phrase ‘a new low’ seems inadequate to describe the mean-spirited, churlish, vicious, nasty, hateful bitterness of the Pittsburgh Post-Gazette Editorial Board. But writing out that serious of descriptive words repeatedly is equally insufficient to capture the true evil this Board has embraced.

This week, they published this scathing indictment of Twitter’s new speech policies with their own frightening anti-trans rhetoric and dog whistling. Coming just weeks after the Federal Government has begun to dismantle federal recognition of the humanity and rights of transgender Americans, this is disturbing on multiple levels. Here’s the editorial.

A Canadian writer named Meghan Murphy who does not accept that transgender people have the right to decide which gender they will be called got herself permanently banned from Twitter.

Ms. Murphy was cited for the speech crime of “misgendering” by saying, “Women aren’t men,” “How are transwomen not men?,” and “What is the difference between a man and a transwoman?” She also committed the offense of “deadnaming,” which means referring to someone by the name he or she used prior to adopting a new sexual identity.

Some of Ms. Murphy’s comments related to the controversy taking place in Canada in which a number of female beauticians are being sued by a transgender woman (a person born a male who now identifies as a female) because the beautician would not service this person.

The plaintiff in that case wanted the beauticians to perform a bikini wax. Ms. Murphy described the proposed service in more graphic terms with reference to the plaintiff’s genitalia. That part didn’t bother Twitter.

It is appropriate for Twitter to enforce hate speech rules. But this was clearly not a case of hate speech. It may have been controversial speech, or even insensitive speech. But it was not hate speech.

Speech that offends someone or some group is not, per se, hate speech, or else most of the monologues on late-night TV would be deemed hate speech.

Twitter is a private enterprise and has a right to police its site as it sees fit. But we can’t have real discussions if people cannot be honest and forthright, and even outspoken. That’s what freedom, indeed communication, is about. And that should matter more to us than being politically correct or being offended at someone else’s views.

One would hope that Twitter, as part of mass communication and of the media in our age, would err on the side of free speech and free expression.

First of all, let’s be clear – what the Post-Gazette describes as “anti-transgenderism commentary” is in fact hate speech. It may be speech that is protected from Government censorship, but it rises far above any reasonable notion of “just being offensive” when people deadname, misgender, etc – that is hate speech. There is no reality in which that is simply another point of view or not an attempt to erase the humanity, identity, and existence of our transgender neighbors, friends, and family.

You can hold the opinion that a trans woman is not a woman, but you are in fact wrong. You are factually wrong. Your opinion is not based on evidence, science, or the experiences of actual trans women. You have the freedom to be a person who has an opinion that is untrue or skewed or irrational, but that is not the same thing as your opinion being on the same footing as the truth, the facts, and the realities.

Twitter is not a Government so they have the right to restrict participation in their business product based on many things. Responding to the free market of ideas, for example or the values of most Americans. Or facts and science. Criticizing Twitter for changing their rules because it constricts the expression of hate speech is tricky, but that’s not the point of the PG editorial anyway.

The point is to give transphobic speech a shout-out and validation from the Block family, to create a false equivalency between the ideas that transgender people have fundamental rights and transgender identity as an artificial construct.

The Block family is willing to throw the transgender community to the wolves in order to continue their other despicable activities like union-busting and propping the likes of Trump, Rick Saccone, Scott Wagner and Keith Rothfus. Note that unions are one very important resource for the trans community. So are elections.

seeking asylum and immigration paths to the United States

speaking out about their experiences of sexual violence and assault

The challenge is what can be done about this.

John Robinson Block is the big cheese and he doesn’t give a damn what you think or if you cancel your subscription. Many people, including myself, believe he wants to tank the Post-Gazette. That would be a terrible new reality for the region which is now already one of the largest in the nation lacking a daily newspaper.

This past January, 16 shareholders in the company and family members of John Robinson Block wrote a joint statements condemning certain opinions expressed by the paper. It is unclear to me what sort of voting control they have within the company or how much profit their stock holdings generate for them individually. It does seem there must be room to hold them to a higher standard than letter writing when it comes to the destructive impulses of John Robinson Block. But could they vote him out? Could they sell their shares of the corporation to someone else? These are business questions that I am asking of various persons better informed on these matters than me. But it seems fair to say that everyone who has a financial stake in the stock of Block Communications Incorporated should be doing something to either throw their hat in with Johnny or actively resisting him.

Still, what can schmucks like you and I do to even connect with these 16 people? Or know if they really care enough to make genuine sacrifices for the common good?

I do urge you to write letters to the Post-Gazette, right now, especially those who are cisgender allies. That’s important. Do that. Speak up loudly and repeatedly.

I urge you to invest in the transgender community right now. Read up, identify the trans led organizations, listen to regional trans voices on Twitter and Facebook and IG and via blogs as well as looking for trans voices in the organizations and businesses you support. Those are important acts of solidarity. Give what you can to finance trans media whether it is podcasts, newspapers, magazines, websites, or local scholarships

Look at the coverage of the trans community by other regional media outlets and see what you can do. How are WTAE, KDKA, and WPXI covering trans stories? Do they employ trans or any LGBTQ professionals? What organizations do they consult as experts on trans stories? What about the online edition of the Trib? Our alt-papers, The Pittsburgh City Paper and the Pittsburgh Current? KDKA radio? The Observer-Reporter, Beaver County Times, Butler Eagle, South Hills Record, etc?

I used a hashtag in the title of this post that has been popular as part of the Pittsburgh response to the recent mass shootings in Squirrel Hill that left 11 of our neighbors dead, a violent act of anti-Semitism and anti-immigration beliefs that was pure hate fed by ignorance. It was white domestic terrorism and we need to believe that the Robert Bowers of the region are not part of the real Pittsburgh.

That notion of refusing to acknowledge how much ongoing damage there is in Pittsburgh because of white supremacy is one of our worst characteristics, our rejection of the realities of two Pittsburghs. Our desire, our need for Pittsburgh to be stronger than hate is so intense that we reject all of the data to the contrary, including the lived experiences of our neighbors. Even our beloved Mr. Rogers is often misinterpreted – he never said there was no hate or evil in the world, he never rejected that bad things happen, he not once suggested we avoid using our words to describe our reality and bury our heads in the sand – he simply focused on hope. Hope requires acknowledging the truth, not turning a blind eye.

Ironically, cancelling a subscription to the Post-Gazette is a symptom of that serious problem. It isn’t so much avoiding the rightwing extremist and white nationalism of the editorial team as missing out on the solid reporting on a range of stories that do explore the many manifestations of hate in the two Pittsburghs – in housing policy, in gun violence, in mental health services, in public education, in political feuds, in healthcare, in the lives of our Black neighbors and the lives of our non-Black neighbors of color, and with regard to the transgender community itself.  The Post-Gazette’s Mike Fuoco is the only journalist in this region twice nominated for a GLAAD Media Award for his reporting on the transgender community. He also happens to be the president of the Newspaper Guild.

We have a shared obligation as allies to the transgender community, especially those of us who are queer cisgender allies, to stand with them in the face of this latest manifestation of violence and abuse. The question now is how best to use our collective privilege and resources to strategically do so. 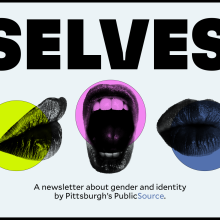