On October 21, 2018, a friend of mine named Jodi Hirsh decided to use the Facebook birthday fundraiser tool to resist the announcement by the Federal Government that they plan to roll back acknowledgements of gender identity. She chose the Transgender Law Center as the recipient.

She wrote “I wasn’t going to do one of these this year, because all I really want my friends to do for my birthday is volunteer their time to elect human beings rather than monsters. But if the party of small government is really going to regulate my family and those like us out of existence, then the lawyers need all the help they can get.”

Now mind you, Jodi works fulltime as a consultant and is up to her eyeballs in Midterms 2018 work. She has a family so is also managing their needs and things like Halloween costumes, while spending most of her free-time campaigning for candidates. She’s organized multiple “family friendly” canvassing & phonebanking events in the North Hills suburbs with childcare, she launched the petition and is working behind the scenes on the Chick-fil-A/Pittsburgh Marathon sponsorship, she relentlessly curates information on elections and policy for her social media feeds. And she makes herself available when certain people (like me) are weeping to her about any one of the above or thousands of other awful situations.

But she made time to do even more good with her birthday, the proverbial lemonade out of lemons with the very clear tie to inspiring people do more than donate – to take action. In my opinion, Jodi is a hometown hero and one of the leaders who offers us a path to a better future if we will just seize it.

I asked Jodi about the fundraiser

To me, the most important path to all citizens being ensured their full human rights and the ability to be their authentic selves, free of violence and harassment and discrimination, is to elect people who understand and respect the dignity of human beings. Right now, that means Democrats. And it means specific Democrats, like Lindsey Williams and Betsy Monroe and Emily Skopov and Dan Smith Jr, and so many other local elected officials who will uphold the right of ALL Pennsylvanians, not just those they deem qualified using their narrow and cruel definition.

There’s a lot of attention on congressional races, and rightly so–but it’s equally important that our local municipalities and states have the people and tools in place to protect us. So, I dedicate my professional and personal life to making absolutely sure that come November 7, I have done every single thing I can to put people in power who will use their legislative tools and bully pulpits to love and protect their constituents, not promote hate and violence against them.

I will admit, it frustrates me to no end that those of us who are most effected by the election’s outcome are often those who do the most to affect it. I don’t believe in allyship unless it’s active. When I see friends and family who call themselves allies sitting back and letting trans and non binary folks and people of color doing all the work, it makes me angry.

But I am also trying to recognize that people give in different ways. And of course, there are also people who have disabilities that prevent them from engaging in election work. It is important for me to remember that. And so I started this fundraiser as a response to the terrible actions of the federal government. And people stepped up in a massive way. So many people. And I am grateful.

But it’s still not enough. If you can, engage politically. I don’t like knocking on strangers’ doors either. And as everyone who has ever met me knows, I hate the telephone. But my discomfort cannot stand in the way of the full and complete humanity of those I love. I have the privilege of doing my part to change the world. I have to use it.

And of course, vote. We don’t keep our civil rights–our very humanity–without fighting for it. So please, do all that you can for the next two weeks. It starts with giving, for sure, but it doesn’t, and can’t, end there. 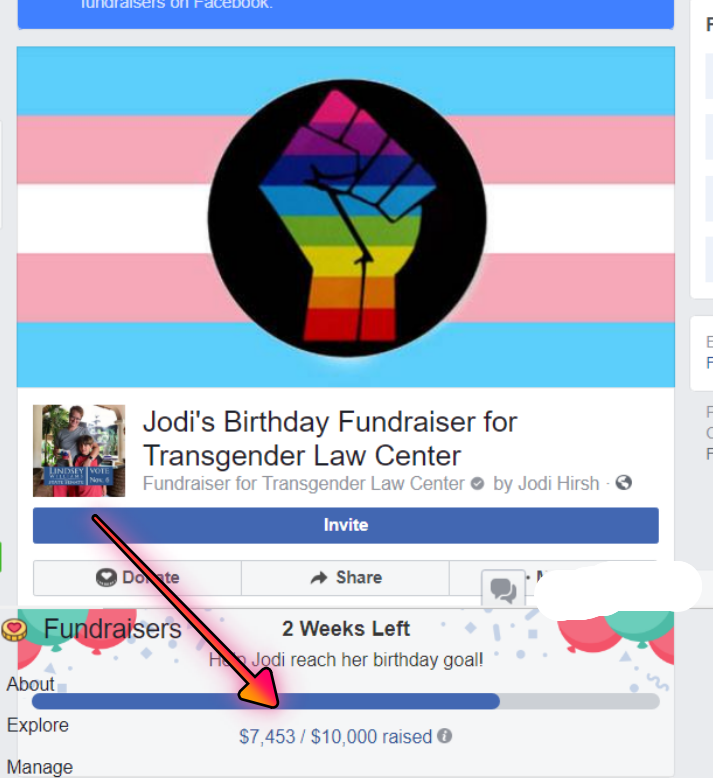