“You snowflakes forget it freedom of speech in this country I wear what the fuck I want to wear!” ~ Jeff Anesin, Allegheny County Democratic Committee, 24th Ward Chair

I caught this on Facebook yesterday – another chapter in the saga of pro-Trump Democrats in the Allegheny County Democratic Committee. I’m guessing Eileen Kelly, Adam Ravenstahl and the Northside Trump Democrats are hoping that if they lay low, it will all blow over. Trump himself has illustrated the effectiveness of that tactic – do nothing, posture a bit, let your minions light the torches, batten down the City/County/State civil service gates, etc. Throw a Nazi gala at our crown jewel venue. No one will notice. 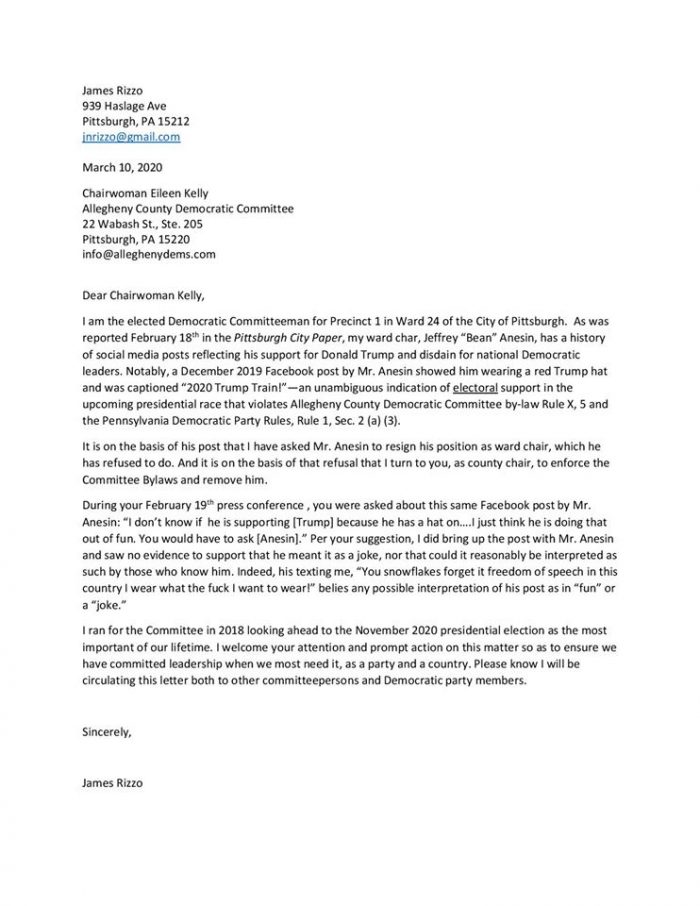 But still some people rise to the occasion rather than crouching to protect their power. James Rizzo is a committeeperson. He took Eileen Kelly at her word and directly asked Jeff Anesin about the social media posts and behavior indicating Anesin is a Trump supporter. He asked Anesin to resign; Anesin refused. So Rizzo has gone back to Ms. Kelly and formally asked her to enforce the bylaws. Raise your hand if you think Eileen Kelly has the moral courage to do so.

In all seriousness, Rizzo didn’t have to do this and may face a backlash. These Northside Trumpies and their cronies throughout Allegheny County aren’t good guys. But Rizzo still did the right thing. He took a stand because it matters. As a Northsider adjacent to these pro-Trump Democrats, I appreciate his stance. We can’t count on the Adam Ravenstahls of the world to do the right thing (or maybe we can always expect him to do the ‘right thing’?) so we must find people willing to hold themselves accountable. People like James Rizzo.

The ACDC process for removal of a member is convoluted, another example of how out of touch this beast is with contemporary Democratic politics. Reform is imperative to remain relevant. Eliminating the entire endorsement process is necessary.

Some Democratic committees are reporting that they will not honor the endorsement outcomes for this election cycle. This craven power base of conservative white supremacists within the ACDC and their outward facing defenders will continue to destroy the party because they are terrified little men and women. How sad that a useless endorsement is a step toward reform.

I invite you to donate $1 in Anesin’s name to the #SteelCitySnowflakes to flip his script. I’ll notify him of each donation.

Below is the entirety of Rizzo’s letter.

I am the elected Democratic Committeeman for Precinct 1 in Ward 24 of the City of Pittsburgh. As was reported February 18th in the Pittsburgh City Paper, my ward char, Jeffrey “Bean” Anesin, has a history of social media posts reflecting his support for Donald Trump and disdain for national Democratic leaders. Notably, a December 2019 Facebook post by Mr. Anesin showed him wearing a red Trump hat and was captioned “2020 Trump Train!”—an unambiguous indication of electoral support in the upcoming presidential race that violates Allegheny County Democratic Committee by-law Rule X, 5 and the Pennsylvania Democratic Party Rules, Rule 1, Sec. 2 (a) (3).

It is on the basis of his post that I have asked Mr. Anesin to resign his position as ward chair, which he has refused to do. And it is on the basis of that refusal that I turn to you, as county chair, to enforce the Committee Bylaws and remove him.

During your February 19th press conference , you were asked about this same Facebook post by Mr. Anesin: “I don’t know if he is supporting [Trump] because he has a hat on….I just think he is doing that out of fun. You would have to ask [Anesin].” Per your suggestion, I did bring up the post with Mr. Anesin and saw no evidence to support that he meant it as a joke, nor that could it reasonably be interpreted as such by those who know him. Indeed, his texting me, “You snowflakes forget it freedom of speech in this country I wear what the fuck I want to wear!” belies any possible interpretation of his post as in “fun” or a “joke.”

I ran for the Committee in 2018 looking ahead to the November 2020 presidential election as the most important of our lifetime. I welcome your attention and prompt action on this matter so as to ensure we have committed leadership when we most need it, as a party and a country. Please know I will be circulating this letter both to other committeepersons and Democratic party members.