The IDs are particularly useful to connect individuals with services and supports. A report released last week describes the benefits and systems necessary to implement a city wide ID program. From the Post-Gazette:

The report noted Bridge ID should be available at a low cost; available to Pittsburghers of all ages, so youths and seniors would be included; should be as secure as a driver’s license; have third-party integration that would allow for other organization such as museums or libraries to use the card like a membership card; and have perks that would make the ID broadly appealing to all city residents.

“The inability to acquire a valid form of identification holds a portion of our city’s residents back from doing things like gaining employment, opening a bank account, accessing social services, or renting an apartment,” the document noted.

The LGBTQ community was part of the planning process and specific recommendations regarding gender identity were incorporated into the recommendations, specifically allowing gender to be an optional field. This means that assigned gender on existing legal documents such as a birth certificate will not impede someone from either selecting their true gender identity or opting not to use any gender identifier.

To obtain an ID, individuals will have an array of options  from presenting current or expired government issued ID to documentation from caseworkers and/or social service providers. I posted the study here if you’d like to read it. Page 22 had that specific information.

Other potential benefits for the LGBTQ community include being able to obtain the ID via Persad Center and other LGBTQ friendly sites around the region, as well as the proposed fee of $10 per card.

Not everyone can afford a state issued ID card, especially when they have to take time off work and/or pay for transportation to the PennDOT center. Not everyone has a permanent address or copies of their official identity documentation.

And the lack of ID can inhibit other significant day to day activities such as cashing a check when your gender expression doesn’t “match” your ID.

These recommendations will go to City Council for consideration. The total cost is projected to be $2 million for the first three years to launch and sustain the program. The City is seeking out foundation support.

I like what I see of this so far, especially the inclusion of Persad Center and the optional gender field. I’m not convinced it is the most significant use of foundation resources, but I do think it is worth considering.  I also think the wide sweeping inclusion of marginalized members of the community bodes well for the overall success of the program – an intersectional approach to what is a serious economic and social series of problems. 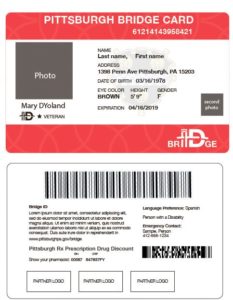