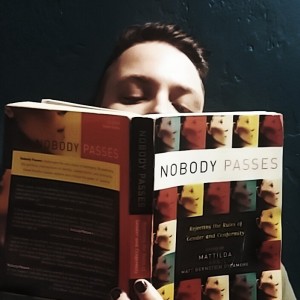 Preferred Pronouns: I like “they” but he or she is also ok.

How do you describe your identity? Queer Transgender Butch fits for now. I’ve tried on genderqueer, nonbinary, genderfluid, and other identities but I no longer feel I’m represented by them given how the definitions seem to have changed, or at least who is using those labels has. Being an ethical vegan and intersectional feminist are also big parts of my identity.

Please describe your coming out experience. Where did you find support? What challenges did you face? I came out to friends as bisexual in my mid teens but most of my experiences with women were one night stands with straight girls and men. I was a drug addict from a young age and that played a big part in me assimilating into heterosexual culture. I did a lot of things with a lot of people that I did not want to do.

When I got clean at around 22 I ended up in a long term heterosexual relationship with someone that ended up more like a roommate relationship than a romance.

Being clean allowed me to realize I was trans and queer and no longer interested in hetero cis men. It was hard coming out because I had to break up with someone who was a decent guy and had not wronged me and who I shared the bills and home with. He had also signed up for a relationship with a cis woman, not a trans person on hormones.

Funny thing is, it worked out ok because (6?) years later we’re still housemates. We lead completely different lives but we live together well.

How would you describe yourself NOW in terms of “being out”? I’m out everywhere. I don’t have much in the way of relatives really, but friends, doctors, and so on I’m always out.

I’m very visibly queer and gender nonnormative looking so I don’t have much of a choice anyways. I’m disabled and unable to work currently, but I was out at work in the past.

Its just easier in my opinion than pretending otherwise since I’m going to be discriminated against either way.

Tell me about the first LGBTQ person whom you met. What impact did they have on your life? My mom was friends with a few gay men and I had a few gay male friends in grade school. I, unfortunately, was not exposed to other kinds of queer and trans people until later in life and this definitely affected it taking me a while to come out.

Past or present, favorite LGBTQ character or creator in television, film or literature? Please tell us why. First thing that comes to mind is that I recently saw “Tangerine” which I thought was an unapologetic masterpiece in terms of queer and trans characters and actresses. I enjoy stories that aren’t focused on one-dimensional assimilating gay characters played by straight people. I want to see real characters played by real queer and trans people with real qualities, struggles, and flaws.

Lisbeth Salander is another that comes to mind- especially in the Swedish films. I often joke that I’ll likely never outgrow my inner strength often coming from a 24 year old swedish woman. I relate to her trauma, her resilience, her independence, and her androgyny.


How do you stay informed about LGBTQ issues? The internet and my very enlightened and intelligent friends. I have few close friends who all are from differing queer and trans identities and backgrounds that keep me posted on new things and how things are changing.

Describe your geographical community.  My neighborhood is fairly diverse in class, race, and sexuality. At least for Pittsburgh. I get dirty looks sometimes and occasionally get called names by tourists driving past but overall, there’s a lot of weirdos around here. Enough that I’m not the only one.

Describe your local or regional LGBTQ community. I don’t have much community. There isn’t much sober, radical, queer, and disability friendly community in Pittsburgh. I am also very introverted. I keep a few friends close and that works for me.

Have you ever experienced discrimination based on your identity? Specifically, in a job setting, when applying for housing or while in public. Yes. In my last two jobs. Too much to detail in this small box. Gender, sexuality, and disability based discrimination. While in public I’ve experienced violence but it’s mostly verbal abuse and microaggressions. And quite a bit in doctors offices and hospitals that I find myself in often as a disabled person. But I’m really lucky right now to have a great PCP at Metro who is wonderful.

Are there issues impacting your LGBTQ neighbors that aren’t visible or part of the local dialogue? Addiction and alcoholism, mental health struggles, disability, sex work, racism, elders being remembered, poverty, neighborhood segregation, police brutality… The list goes on. Its not that these things aren’t being talked about by the people who suffer most from them. They are. But, they aren’t present much in the voices that dominate LGBT issues who focus more on marriage and militarism than on survival of the rest of us.

What would you like to see elected officials do to improve life for LGBTQ Pennsylvanians? This is a tough question because I believe many of these systems are stacked against us by design and can’t be “reformed.” That said, decriminalization of drug addiction, sex work, poverty, and so on is very important. Getting people out of prisons and back to their families (chosen or otherwise) and supporting that transition. Focusing on supporting queer and trans youth of color and in poverty having access to resources, education, housing. And improving trans healthcare access.

Please share a lived experience, anecdote or fact about life as an LGBTQ person in your community. Remember where you come from. I try to tell myself this every time I want to judge someone harshly for not understanding my struggles or an issue I care about (and I do). I try to remember that everyone is fighting their own battles and needs a chance to learn. I tell myself these things because I need to hear them and am not good at remembering them. I wasn’t always awake (and I still have a long way to go) so I can’t expect others to be.

Beyond discrimination, what other barriers create challenges for your LGBTQ neighbors? White supremacy (this is a discrimination, but one I don’t face as a white person and it destroys our communities). Lack of resources. Lack of safer spaces. Lack of listening to each other, especially when our intersectional identities differ.

What LGBTQ friendly resources are available for your neighbors? Metro Community Health Center and Persad have helped me a lot as well as Produce to People (a great food bank program for vegans like myself) and medical assistance (which isn’t really lgbtq friendly but it allows me to have healthcare). None of these is perfect, but I don’t know where I’d be without them.

What is your greatest fear for the LGBTQ community in Western Pennsylvania? That we are eating ourselves alive by being too hurt to focus on our desperate need for healing.

What is your greatest hope for the LGBTQ community in Western Pennsylvania? That we can fight queer and trans oppression through an intersectional frame work including fighting racism, classism, ableism, ageism, and so on. And that we can make space for healing and for having fun while doing so.

What can allies do to support your LGBTQ community? Listen. Confront your straight and cis friends/family when they do oppressive things. And fight all other oppression simultaneously. We are all connected and will never progress without fighting all oppression together.

How can gay men and lesbians support the bisexual, transgender and queer members of our community? I think support needs to go in both directions as well as make room for intersecting identities (race, ability, class, age, etc)

What motivated you to take part in this project? I waited a long time before adding my voice. I think I wanted to contribute because I was enjoying reading everyone else’s and wanted to give something in return.

Finally, what question should I have asked? Please also share your answer. I would like to hear about any organizing people are doing but this could be covered in other questions.