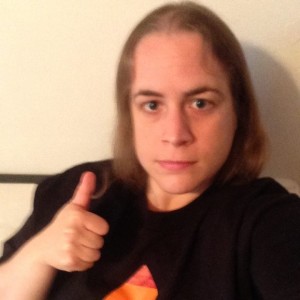 Preferred Pronouns: I’m not picky, but I appreciate “they” or other neutral pronouns

How do you describe your identity? pansexual, androgynous (non-binary and genderqueer also work), white, pagan, neuro-atypical

Please describe your coming out experience. Where did you find support? What challenges did you face? I told a few of my friends in high school, and most of them were great about it. One friend was very religious and had sort of a “love the sinner, hate the sin” attitude toward it, but she still accepted me as a person. A couple of others were kind of weird about it, but I didn’t lose any friends. A few of my close friends were very supportive, and it was great to feel unconditionally accepted. The biggest challenge was keeping it from family members, only because I don’t feel comfortable sharing personal stuff with family.

How would you describe yourself NOW in terms of “being out”? I’m fairly open with most of my friends, though I don’t really talk about it unless the topic comes up in conversation. I’m a private person and feel like my sexuality is nobody’s business but mine. I’m not out to most family members, because I avoid sharing anything personal with them. (I know they wouldn’t have a problem with it, but it’s just too personal.) As for gender identity, I’m open about that. I am who I am, and if people don’t like it, they don’t need to be in my life.

Tell me about the first LGBTQ person whom you met. What impact did they have on your life? When I was around 14, my friend told me she was bisexual. We were very accepting of each other during high school, and she was also the first person I came out to. We’re still friends and talk every now and then.

Past or present, favorite LGBTQ character or creator in television, film or literature? Please tell us why. I have to go with RuPaul, because he has done so much for the LGBTQ community, is true to himself, and is really empowering.


How do you stay informed about LGBTQ issues? mostly the internet and friends

Describe your geographical community.  I live in Monroeville, which is really a commercialized area. I feel pretty disconnected from people in this area in general, but I have a lot of friends in the UU and pagan communities in the Pittsburgh area. I don’t really know if Monroeville is LGBTQ friendly. I lived in Murrysville during my teens, and it definitely wasn’t LGBTQ friendly at all. I think it’s a little better now, but Murrysville isn’t exactly known for being warm and tolerant.

Have you ever experienced discrimination based on your identity? Specifically, in a job setting, when applying for housing or while in public. The most I’ve really experienced is unwanted comments from people. I’m a pretty quiet, solitary person and tend to keep certain aspects of my life to myself unless I feel comfortable sharing. Most strangers are too focused on my height (I’m 4’9″) to notice or comment on anything else about me.

Are there issues impacting your LGBTQ neighbors that aren’t visible or part of the local dialogue? not that I know of

What would you like to see elected officials do to improve life for LGBTQ Pennsylvanians? I’m not sure.

Please share a lived experience, anecdote or fact about life as an LGBTQ person in your community. The UU community has been really awesome. When a young man came out as trans, our church honored his transition and held a small ceremony for it during a regular service. It was really touching and wonderful, and it made me proud to be part of such an accepting community.

Beyond discrimination, what other barriers create challenges for your LGBTQ neighbors? I think public bathrooms are a big issue, and I’d love to see more gender-neutral bathroom options. (Those singular handicap-accessible, family-friendly bathrooms are great, but most public places don’t have them.) I also really worry about the safety of my trans friends when they’re out in public.

What LGBTQ friendly resources are available for your neighbors? I know there are several in Pittsburgh (like Persad and the GLCC)

What is your greatest fear for the LGBTQ community in Western Pennsylvania? There’s still a lot of prejudice, and while that lessens with time, it’s harder to eliminate. I worry that my trans friends will become victims of violence, because transphobia is still so rampant.

What is your greatest hope for the LGBTQ community in Western Pennsylvania? Changing societal attitudes and prejudices takes time, but it’s possible. I hope that in the future, people will be free to be themselves without fearing violence or discrimination.

What can allies do to support your LGBTQ community? love, accept, and support us

How can gay men and lesbians support the bisexual, transgender and queer members of our community? love, accept, and support us

What motivated you to take part in this project? My minister shared the link. It’s good to hear from a wide variety of people, so sharing my stories sounded like a good idea.

Finally, what question should I have asked? Please also share your answer. I can’t think of anything.