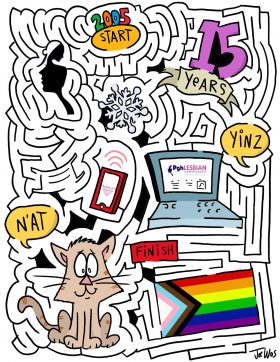 I cannot put into words how much I love this. I love that it starts with my original logo that is clearly centering two women and ends with the progressive Pride flag. I love the cat. I love the snowflake. I really love the cell phone and laptop. Joe Wos has been a long […] 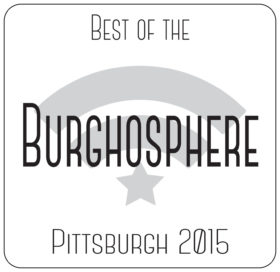 If I was asked to define what makes a blog great, I would respond that it is both content and layout/design. Nothing is more important than solid content. You want to engage your readers and keep them returning. Content is key. But layout and design matter as well. You don’t have to use a […] 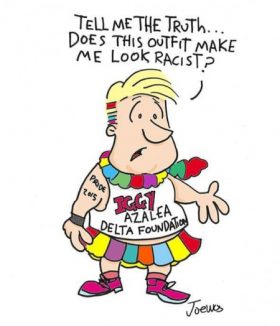 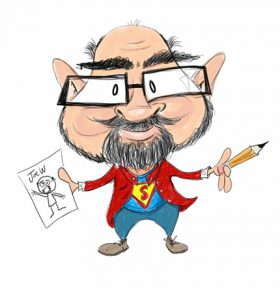 As part my NaBloPoMo examination of art and blogging, I asked a few folks to consider some of the same questions I’m pondering. First up is Joe Wos, freelance cartoonist. Joe has contributed to this blog and contributed to previous Q&A series as well. Joe has been part of my life for more than four years; […] 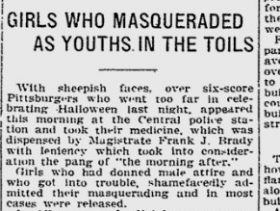 This Q&A series focuses on artists contributing to the #ArtisticVisionPgh project cosponsored byMost Wanted Fine Art and Penn Avenue Eyewear. Our next contributor is Joe Wos of the Toonseum.   Name: Joe Wos Website: mazetoons.com Twitter: @Toonseum How old were you when you first had to wear glasses?  I started wearing glasses when I was 7 years […] 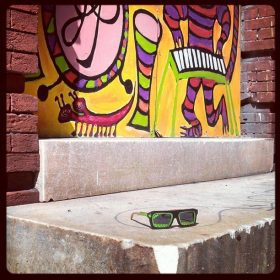 I was quite pleased a few weeks ago when Nina with Most Wanted Fine Art approached me to participate in an art project. The concept is very close to my heart – participating artists are lending their skills to support the eye health of local artists. MWFA is teaming up with Penn Avenue Eyewear for […] 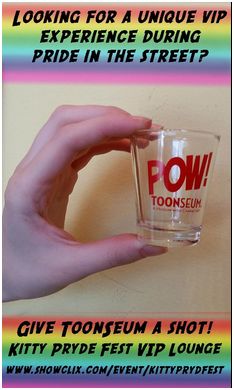 ToonSeum Executive Director Joe Wos has been busy responding to support the organization has received in response to news that people were cancelling membership because of their support of the LGBTQ community. The ToonSeum is sponsoring a VIP event during Pride in the Streets – Kitty Pryde in the Streets VIP Lounge. Note – you […] 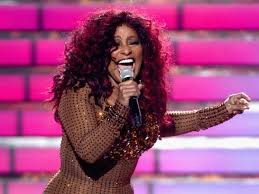 I have never been to Pride in the Street because I don’t really like standing in crowds, especially if people are drinking. There’s nothing inherently wrong with it – it just isn’t comfortable for me. When Melissa Etheridge played, I was out of state so I wasn’t even tempted. But when I heard Chaka Khan […]