I belong to a community email list, identified as a Northside resource but focused mostly on the War Streets and surrounding communities.  It is riotous group filled with a small core of virulently anti-homeless agitators.  Not those who agitate to end homelessness, but to end the homeless. I am only slightly exaggerating.  I was at […]

This is from a Joel Stein in Sunday's Post-Gazette. Does it work for you? He's effete He's well-dressed. He eats arugula — which he buys at Whole Foods. He mocks those who use guns. He is, as we mentioned, quite thin. He may only be half-black, but he's three-quarters gay.   Eh.

What a fun, fun movie.  With a lovely gay twist.  I must admit I still find Colin Firth very fetching.  And criticism of Pierce Brosnan's singing is unwarranted.  It is campy as can be and he's a delight!  Sure, they could have found a hottie who could truly sing (think Ewan McGregor at age 50), […]

I read in the PG that Snickers has pulled an ad running in Britain which features Mr. T telling those silly Brits to “Get Some Nuts.”  In this one particular ad, Mr. T confronts a speed walker and makes him run like a man by pelting him with Snickers bars.  The Human Rights Campaign Foundation […] 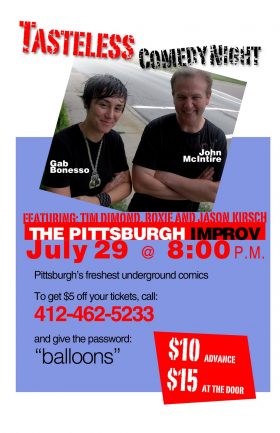 I promised myself that I would not be blogging politically for the foreseeable future b/c my frustration with the state of LGBT advocacy in Western Pennsylvania is just off the scale.  I have little objectivity b/c it is my actual life and livelihood and living conditions that have been cast aside in favor of bigger […]

Final nail in the coffin.  For this round. Courtesy of Equality Advocates: The Pennsylvania legislature adjourned for its summer recess in the first week of July without any further action on the proposed Constitutional amendment, SB 1250. The legislation attempted to prohibit legal recognition of non-marital relationships in Pennsylvania including marriages of same-sex couples and […]

So I asked Vice-Chair, Kat Carrick, how the everyday Pittsburgh queer can help with the relocation of the GLCC.  Rest assured the organization has been working for many months on this very issue — we all know they've planned to move even if we weren't aware of the impendingness of the whole situation.  There's something […]

Today, my brother's wife asked me to change my profile picture on Facebook.  You can't see my profile unless you are my friend so there's no sense my posting a link (you can search for me if you want to be my friend).  However, the image is the logo at the top of the blog.  […]

Rumors circulated last week that the building housing Pittsburgh's Gay & Lesbian Community Center would be razed as part of a planned new development on the prime intersection of 5 roads in Squirrel Hill.  They were right. According to Saturday's Post-Gazette, a $50 million residential/retail development mix is slated for the corner of Murray and […]