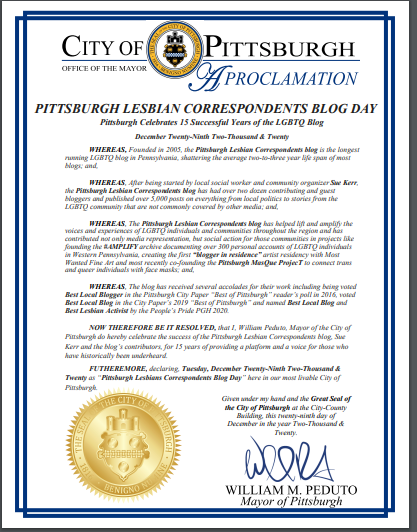 WHEREAS, Founded in 2005, the Pittsburgh Lesbian Correspondents blog is the longest
running LGBTQ blog in Pennsylvania, shattering the average two-to-three year life span of most
blogs; and,

WHEREAS, After being started by local social worker and community organizer Sue Kerr,
the Pittsburgh Lesbian Correspondents blog has had over two dozen contributing and guest
bloggers and published over 5,000 posts on everything from local politics to stories from the
LGBTQ community that are not commonly covered by other media; and,

WHEREAS, The Pittsburgh Lesbian Correspondents blog has helped lift and amplify the
voices and experiences of LGBTQ individuals and communities throughout the region and has
contributed not only media representation, but social action for those communities in projects like
founding the #AMPLIFY archive documenting over 300 personal accounts of LGBTQ individuals
in Western Pennsylvania, creating the first “blogger in residence” artist residency with Most
Wanted Fine Art and most recently co-founding the Pittsburgh MasQue ProjecT to connect trans
and queer individuals with face masks; and,

NOW THEREFORE BE IT RESOLVED, that I, William Peduto, Mayor of the City of
Pittsburgh do hereby celebrate the success of the Pittsburgh Lesbian Correspondents blog, Sue
Kerr and the blog’s contributors, for 15 years of providing a platform and a voice for those who
have historically been underheard.

Given under my hand and the Great Seal of the City of Pittsburgh at the City-County Building, this twenty-ninth day of December in the year Two-Thousand & Twenty.”