This is a temporary version until the hard copy arrive in a few weeks. 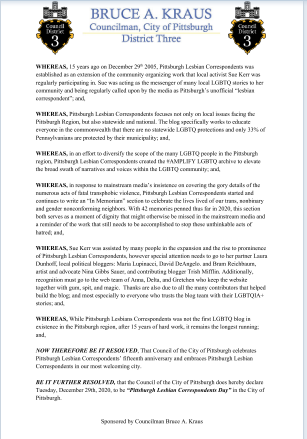 “WHEREAS, 15 years ago on December 29th 2005, Pittsburgh Lesbian Correspondents was
established as an extension of the community organizing work that local activist Sue Kerr was
regularly participating in. Sue was acting as the messenger of many local LGBTQ stories to her
community and being regularly called upon by the media as Pittsburgh’s unofficial “lesbian
correspondent”; and,

WHEREAS, Pittsburgh Lesbian Correspondents focuses not only on local issues facing the
Pittsburgh Region, but also statewide and national. The blog specifically works to educate
everyone in the commonwealth that there are no statewide LGBTQ protections and only 33% of
Pennsylvanians are protected by their municipality; and,

WHEREAS, in an effort to diversify the scope of the many LGBTQ people in the Pittsburgh
region, Pittsburgh Lesbian Correspondents created the #AMPLIFY LGBTQ archive to elevate
the broad swath of narratives and voices within the LGBTQ community; and,

WHEREAS, in response to mainstream media’s insistence on covering the gory details of the
numerous acts of fatal transphobic violence, Pittsburgh Lesbian Correspondents started and
continues to write an “In Memoriam” section to celebrate the lives lived of our trans, nonbinary
and gender nonconforming neighbors. With 42 memories penned thus far in 2020, this section
both serves as a moment of dignity that might otherwise be missed in the mainstream media and
a reminder of the work that still needs to be accomplished to stop these unthinkable acts of
hatred; and,

WHEREAS, Sue Kerr was assisted by many people in the expansion and the rise to prominence
of Pittsburgh Lesbian Correspondents, however special attention needs to go to her partner Laura
Dunhoff, local political bloggers: Maria Lupinacci, David DeAngelo. and Bram Reichbaum,
artist and advocate Nina Gibbs Sauer, and contributing blogger Trish Mifflin. Additionally,
recognition must go to the web team of Anna, Delta, and Gretchen who keep the website
together with gum, spit, and magic. Thanks are also due to all the many contributors that helped
build the blog; and most especially to everyone who trusts the blog team with their LGBTQIA+
stories; and,

WHEREAS, While Pittsburgh Lesbians Correspondents was not the first LGBTQ blog in
existence in the Pittsburgh region, after 15 years of hard work, it remains the longest running;
and,

BE IT FURTHER RESOLVED, that the Council of the City of Pittsburgh does hereby declare
Tuesday, December 29th, 2020, to be “Pittsburgh Lesbian Correspondents Day” in the City of
Pittsburgh.