How did I spend my 4th of July? We took a local road trip out to Belle Vernon/Rostraver to check out rightwing political signs posted on the property of a local business, Elizabeth Equipment Services.

I got the tip last night while watching Hamilton (of course) so Ledcat and I decided we would look at it ourselves as a our own private patriotic gesture of resistance. After the work I did on the white supremacy billboards in Worthington, Armstrong County last year, I felt a moral obligation to follow through.

I asked the person who took the footage why they didn’t just drive by, why they took the time to search for someone to listen. This individual is white.

A person of color should be able to drive wherever they please without feeling out of place or in danger, in fact we all deserve that. We all deserve to feel at peace.

I’m posting my photos in the order in which the signs are posted alongside Route 51 South. And note that I found evidence suggesting this goes back to at least 2015.

First there are some eye-rolling signs poking at local elected officials aka public figures with immature thrusts and silly word play. This is ridiculous, but the sort of infantile Trumpy petulance we are too familiar with, right? 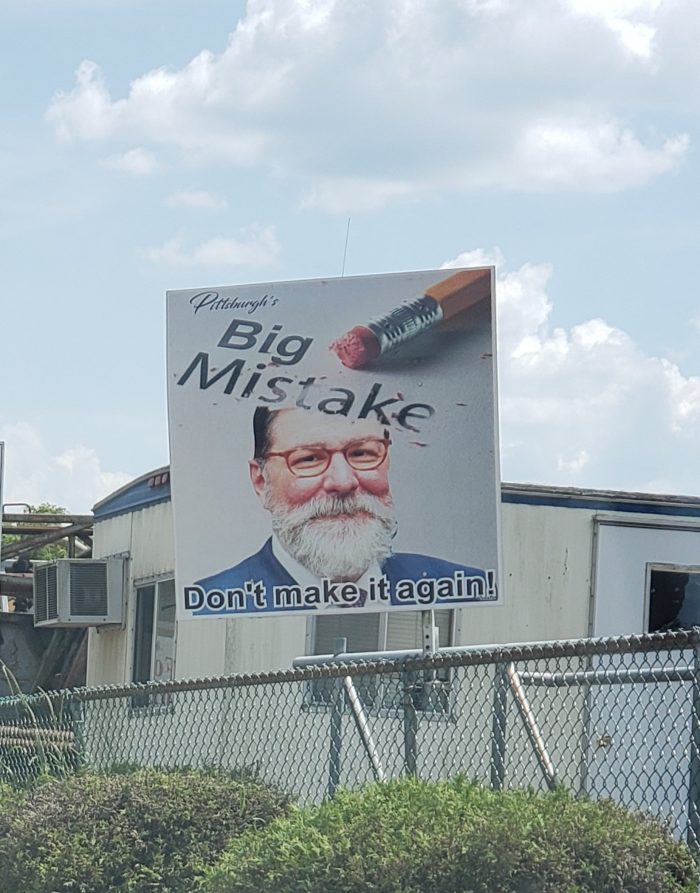 Then there’s the Trump sign, complete with a set of gold encrusted brass balls (I think), and man, that’s just a glorious reason not to patronize this business itself. 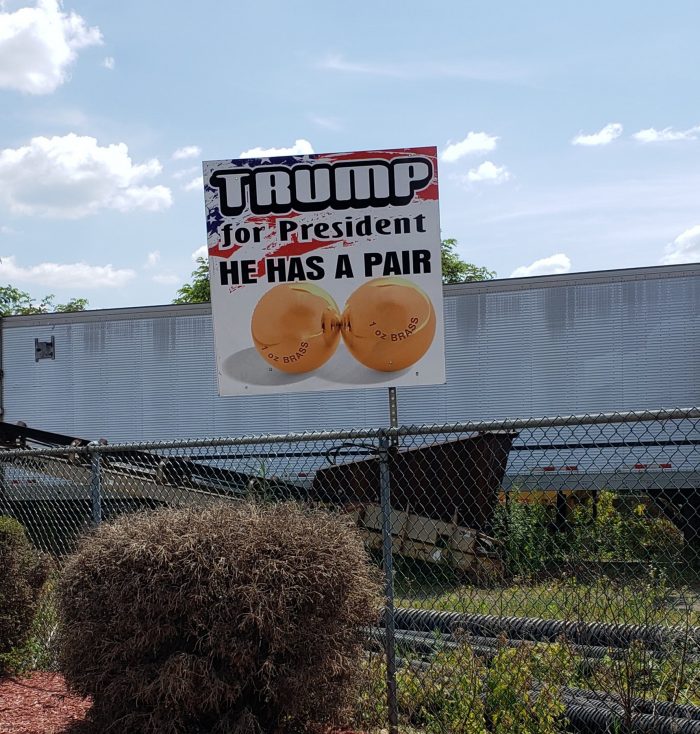 Then is this little gem thanking god for breeders. So Ledcat and I interpreted this differently – she said it is a reproductive concept tied to white supremacy and Christian quiverfull movement. I thought it was anti-queer.  Either way (or both ways) this is sliding away from poking elected officials to hard-core rightwing extremist white nationalism rhetoric. It is code. 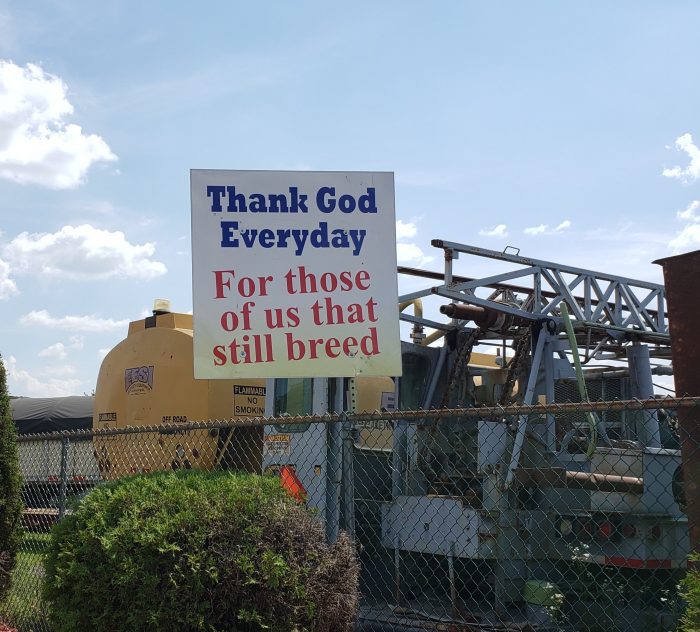 There’s a sign purporting to mock the person who knocked the signs down (please call me, whomever you are) with an ever so Christian use of the middle finger. 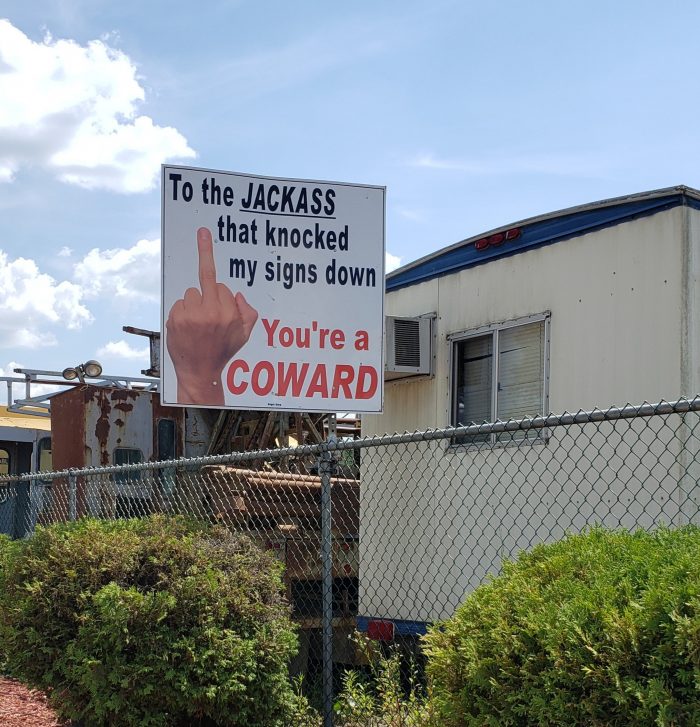 Then a seemingly ambiguous reference to term limits??? I thought it was ironic that the voter silhouettes are the color black. Who exactly will be voting to change term limits? 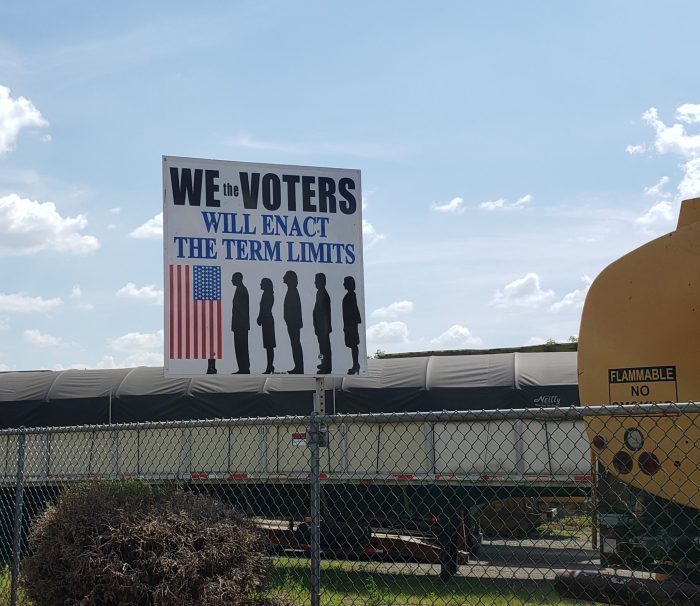 Then some more political signage targeting Senator Bob Casey as a “putz”  – so once again, I have to laugh. Putz is a Yiddish slur equating someone to a penis, a term that’s merged into Pittsburghese. So we’ve got Black voters on the previous sign and references to Jews on this one. Again, deliberate or simple ignorance? 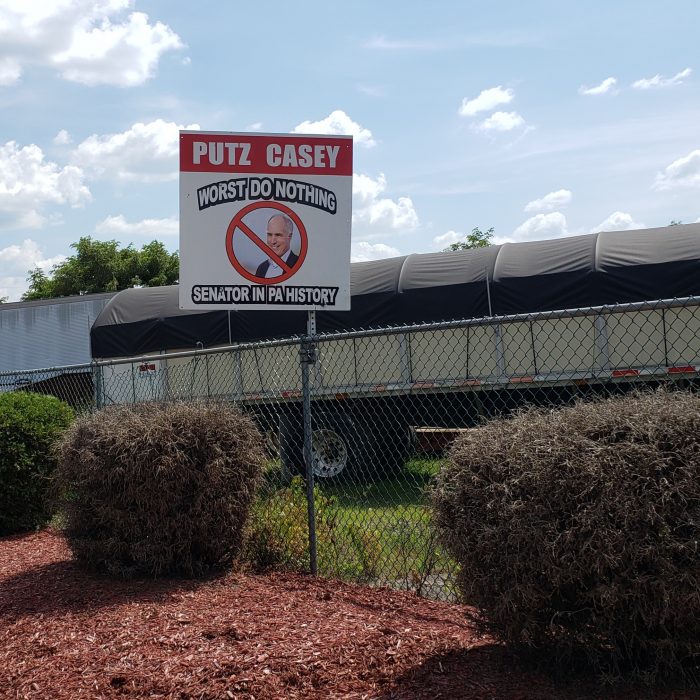 Then a general jab at Casey. 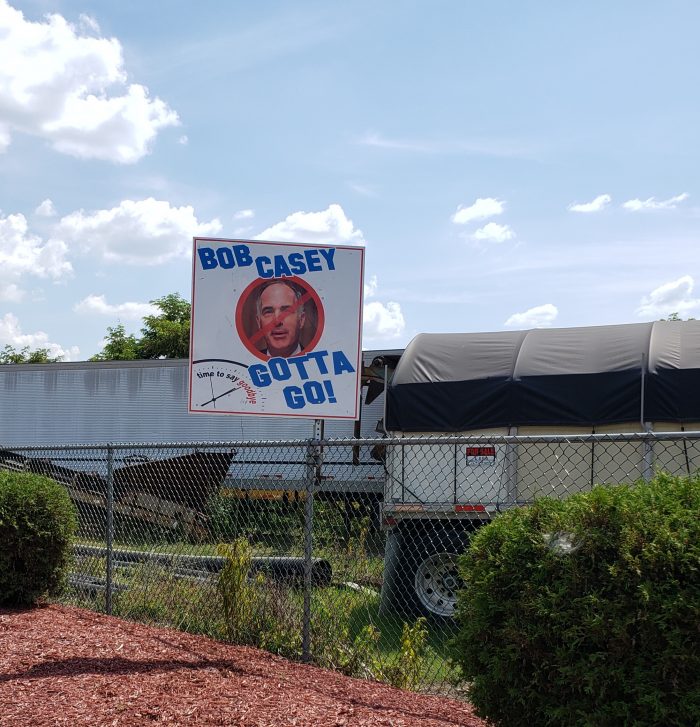 Then “Racism was almost dead in American until Obama.”  What? I looked up that phrase and was shocked by how prevalent the sentiment that racism was almost dead before Obama was elected. I wasn’t shocked to see them blame Obama. But this is clearly code for white supremacists. 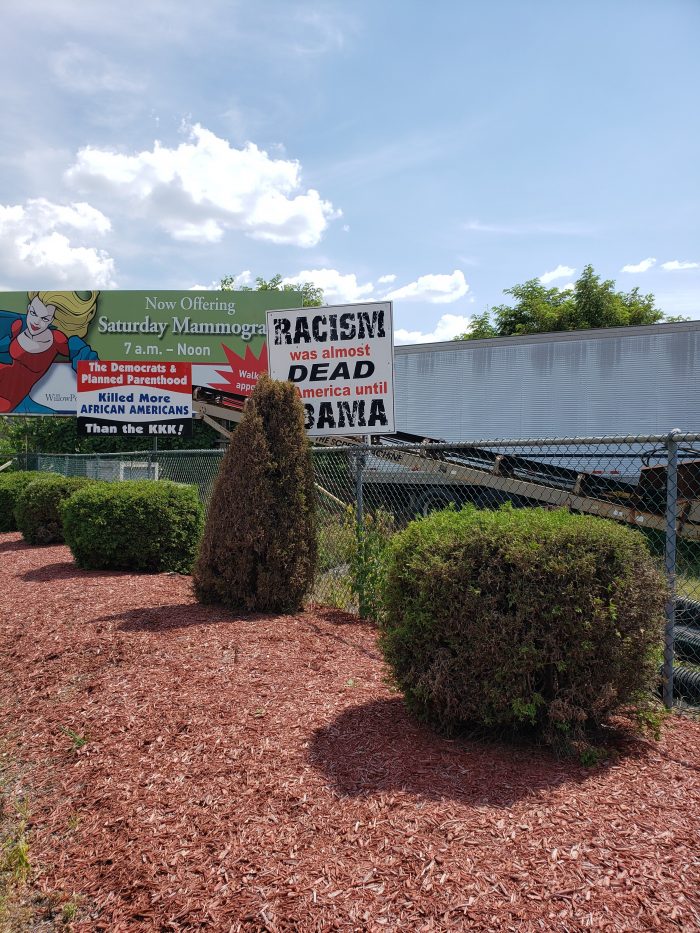 And then a billboard blaming Planned Parenthood and Democrats for violence against Black Americans. And wrapping it up with a reference to the KKK. 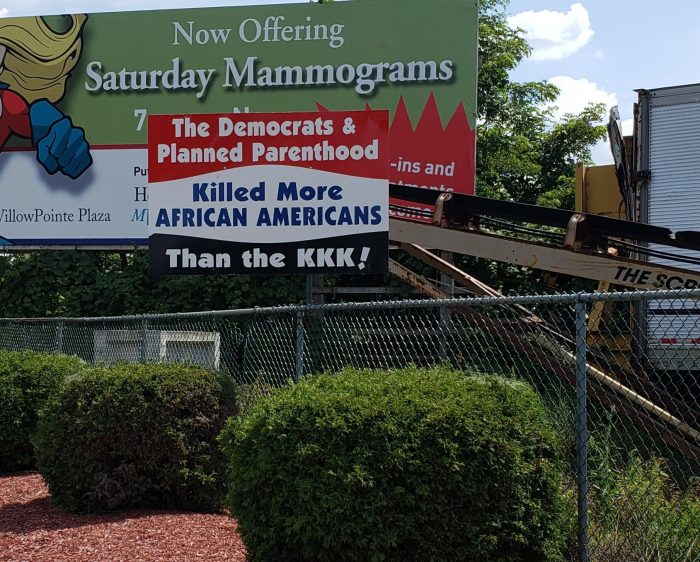 See how the narrative moves from absurd suggestions that non-City residents should have a say in the Pittsburgh Mayoral race to full fledged white supremacy and KKK apologizing. The themes here tie together white supremacy, anti-choice rhetoric, and a very Pittsburgh way of infusing Judaism and images of Black Americans voting, however unintentionally, in a twisted, unneighborly and racist way. But also a reflection of how white supremacy winds its way through both rural and corporate culture, not to mention the role of private property ownership gunning this whole situation. Start out with “the damn Peduto” and end up with a defense of the KKK … that’s a dangerous slippery slope.

Attempts to diminish the legacy of the KKK on the lives of Black Americans are hateful, ignorant, and absurd. It is a clear slap in the face of the Black Lives Matter movement and utter resistance to acknowledging reality. It is the act of a desperate white supremacist who falls deeply into their privilege to buffer them from accountability.

So who posted these signs? I don’t know for sure. They are posted on the property of Elizabeth Equipment Services along Route 51 South at 5300 Hayden Blvd, Belle Vernon, PA 15012. Belle Vernon is in Fayette County, adjacent to Washington and Westmoreland counties. I can’t find much about them except that the President is named Ursula Smith. And I somehow think this is the decision of a small-minded, petulant man much like John Placek in Worthington, Armstrong County. I could be wrong. Perhaps Ursula Smith is a rabid white supremacist with a strange Bob Casey and Donald Trump fetish?

So here’s where a database offers insight, specifically campaign contributions made by both Ursula Smith and her husband, Art Smith aka Arthur R. Smith. Mr. Smith has invested in everyone from Donald Trump to Rick Santorum to Rick Saccone to John Boehner to Tim Murphy and beyond. Lots of donations to the RNC.  Arthur established the company in 1994 and is generally listed as General Manager. Are these signs the brainchild of Arthur R. Smith? Does he know John Placek?

My gut says a man created this content. But I honestly don’t know.

I’m sure some well placed questions will get us the missing information.

UPDATE HERE: This is where it gets tricky and required external consultants to help me hone in on the maps. The business receives mail through a Belle Vernon, Fayette County as listed above BUT it seems to be actually in Allegheny County, specifically Forward Township. It took a bit of work to get that info on a Sunday of a holiday weekend. Thanks to C for the assist.

Since the signs are on their own property, there’s probably not much to be done legally. I highly doubt Forward Township has any serious regulations but I don’t know about Allegheny County. Route 51 is a state road full of billboards and we learned how that goes with the John Placek situation. This is the penultimate triumph of capitalism and private property. If you own the property, you can spew white supremacy as far as the eye can see.

MY ORIGINAL STATEMENT: Let me also clarify that I *think* this property is in Belle Vernon. It is so hard to sort out these little communities. The mailing address and zip code are Belle Vernon, but it could be North Belle Vernon. The registered address for the company is Elizabeth. It matters in terms of accountability, but these community boundaries don’t recognize political affiliations. Four counties collide out here (Allegheny, Fayette, Washington and Westmoreland) blurring the urban/suburban/rural lines.

This is Southwestern Pennsylvania, INCLUDING portions of Allegheny County. This is not some vague central pa region or northern set of counties. This is Pittsburgh, not some far off yonder region with no ties to us – it is right on Route 51, the route you take to kayak on the Youghiogheny or visit Falling Water or go to Round Hill Farm/Park. These folks park n ride their way into office jobs Downtown and sit next to us at lunch because they are us. Yes, this is a rural stretch of road but these are our white folks, our neighbors and we need to address these issues.

This slow roll from some (allegedly) amusing Peduto bashing to full fledged KKK references is a serious problem.

Now the Smiths don’t give a damn what I think. I’m not going to be a customer. We have no mutual social acquaintances.

Do they care what you think? Well, remember that John Placek lost his Sunoco franchise over his hateful signs. He promptly found another regional distributor, but his signs have toned down a bit. Is that a victory? Are there any more resources in Armstrong County for Black, queer, and otherwise marginalized residents now? Has any local group been seeded from Allegheny County $$?

Maybe we need to start by asking Black folks along Route 51 what they need and/or want.