The residents of district 36 deserve a solution to the flooding that impacts their daily lives. They are tired of constant studies and plans that don’t materialize.

Next up is Jessica Benham, candidate for State House District 36, the seat currently held by Harry Readshaw who is retiring after his current term. Jessica is a can’t-miss-voice for the LGBTQ community and disability communities. I am paying very close attention to this election because two of my niblings, both of whom are Black male children, live there.

Benham’s opponent has made headlines as a pro-Trump Democrat. That’s not a big reach for a Harry Readshaw acolyte, but it is not in touch with the people who live in the district. I encourage you to learn about Benham’s ideas and vision across the many issues a State Representative must address. She is forward thinking.

How do you describe your identity? I’m a bisexual woman with a disability.

What are some under or unappreciated strengths and resources of your district? Our neighborhoods are strong and resilient, with tightknit community groups filled with passionate people. We have up and coming business districts, good schools, great libraries and other vital community resources.

Tell us about the first LGBTQ person you met and what impact they had on your life? I honestly don’t specifically remember the first LGBTQ person that I met. I knew I was bi from a young age, but growing up in a religious family, I was closeted. I don’t remember meeting openly LGBTQ people until college and by then, I was out myself.

I believe in centering those who are most impacted by any given policy, committing to cross-movement organizing, and recognizing that our paths to freedom are interconnected.

Please tell me about your familiarity with the LGBTQ community in your district and the region. As an LGBTQ person myself, I’ve been involved in LGBTQ community throughout the Greater Pittsburgh area, though frequently specifically through LGBTQ disability community spaces. For example, through my work at the Pittsburgh Center for Autistic Advocacy, the region’s only LGBTQ and Autistic-run Autism advocacy organization, we’ve partnered with groups like SisTers PGH to offer sensory friendly spaces at their events, so that Autistic people can be fully welcomed into LGBTQ spaces.

Based on this, what do you understand to be our top LGBTQ concerns and priorities for the General Assembly? How will you respond to those priorities? I would be the first out LGBTQ+ woman elected to the Pennsylvania state legislature, in a state that does not have civil rights protections for LGBTQ+ people enshrined in law. I’m committed to working together to achieve equity for all people, regardless of sexual orientation or other identities, and I look forward to being a spokesperson on the issues that our communities face. Particularly, I’d be a strong proponent of the PA Fairness Act and the PA Safe Schools Act, as well as legislation banning the so-called ‘panic defense’ and banning conversion therapy.

How does intersectionality inform your work? Intersectionality is one of those words that has frequently been co-opted to mean something other than what its creator, Kimberlé Crenshaw, intended. Crenshaw’s theory of intersectionality, which she introduces in 1989 in the context of legal studies, is specifically about the ways in which the law has failed to adequately understand and address discrimination against Black women. For me, I understand intersectionality within the context of disability justice, as developed by the Disability Justice Collective and Sins Invalid, recognizing the necessity of seeking to understand the complex ways in which systems like ableism, white supremacy, and sexism interact to perpetuate injustice. I believe in centering those who are most impacted by any given policy, committing to cross-movement organizing, and recognizing that our paths to freedom are interconnected.

The threats of ‘religious liberty’ laws and exemptions target both LGBTQ rights and women’s rights. How does the state government navigate this equivalency of personal religious freedom with systemic oppression and control of underserved people? For me, this is again about centering those who are most impacted by a policy – one person’s religious freedom should not infringe on another’s bodily autonomy. I will stand against any attempt to limit LGBTQ and women’s rights.

Landslides and flooding are serious issues in your district. What specific types of state level investment will protect the community and the environment? Landslides and flooding are one of the most significant challenges we face in House District 36. In District 36, the Saw Mill Run Watershed covers the majority of the district, including parts of Mt. Washington, Brookline, Carrick, Mount Oliver, Overbrook, and Brentwood. As the Pittsburgh Water and Sewer Authority notes, “The valley’s steep slopes, the high density of impervious surfaces and the stream’s close proximity to the highway lead to frequent flooding along the stream channel. Flooding and nonpoint source pollution have been major problems for more than 50 years along the stream and its tributaries.”

While the U.S. Army Corp of Engineers, various municipalities, water and sewer management authorities, community partners, and other organizations have worked together to study and develop plans to address the impacts of past flooding and decrease the likelihood of future flooding, they deserve a partner at the state level who is willing to fight for the necessary funding to complete much needed infrastructure updates. The studies have shown us what needs to be done – and as a state legislator, I will fight alongside community partners for public and private grant funding to complete the work.

The residents of district 36 deserve a solution to the flooding that impacts their daily lives. They are tired of constant studies and plans that don’t materialize. If elected, I promise to be a leader in the fight to save people’s livelihoods, restore their quality of life, and enable the Route 51 corridor to be a beautiful, shining example of the impacts of water management infrastructure on a local economy.

Tell me about your other endorsements and supporters. I’m excited to have earned endorsements from a broad coalition of elected leaders, community advocates, and groups, including SEIU PA State Council, Victory Fund, UNITE PAC, State Reps. Dan Frankel and Ed Gainey, and Pittsburgh City Councilors Theresa Kail Smith and Bruce Kraus. A full, up-to-date list of endorsements can be viewed at: http://www.benhamforpa.com/endorsements.html 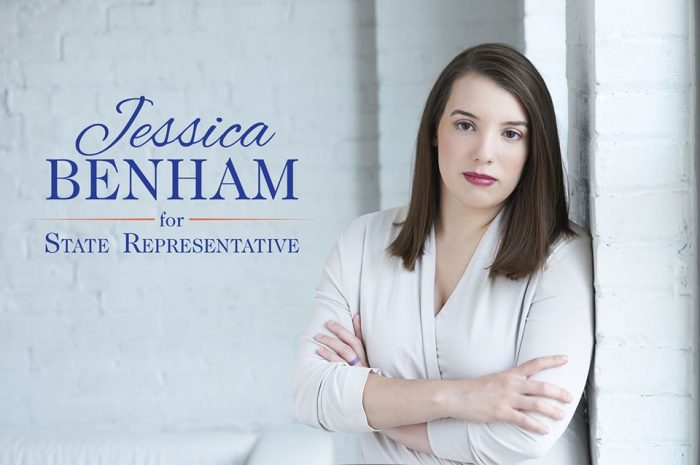