A few days ago, a person whom I know only through social media and a few mutual friends decided to leave a comment on an Instagram post I had shared – a photo of some of our resident cats and foster kittens eating dinner together. Her comment was a disproportionate reaction to  few cat hashtags. 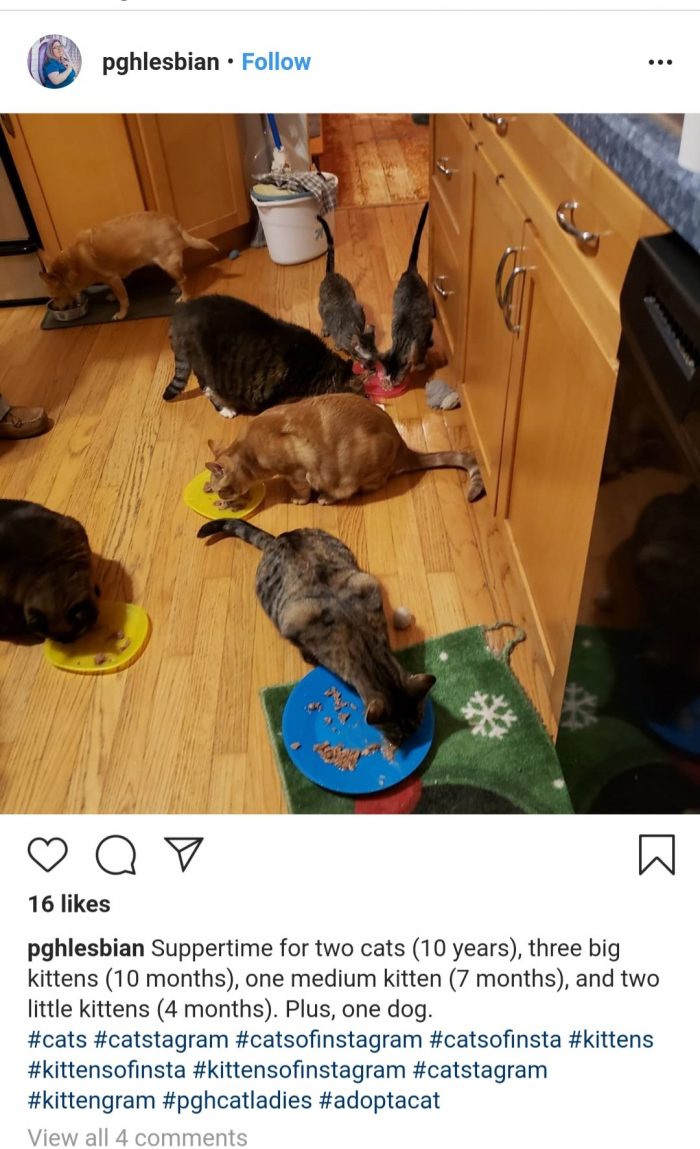 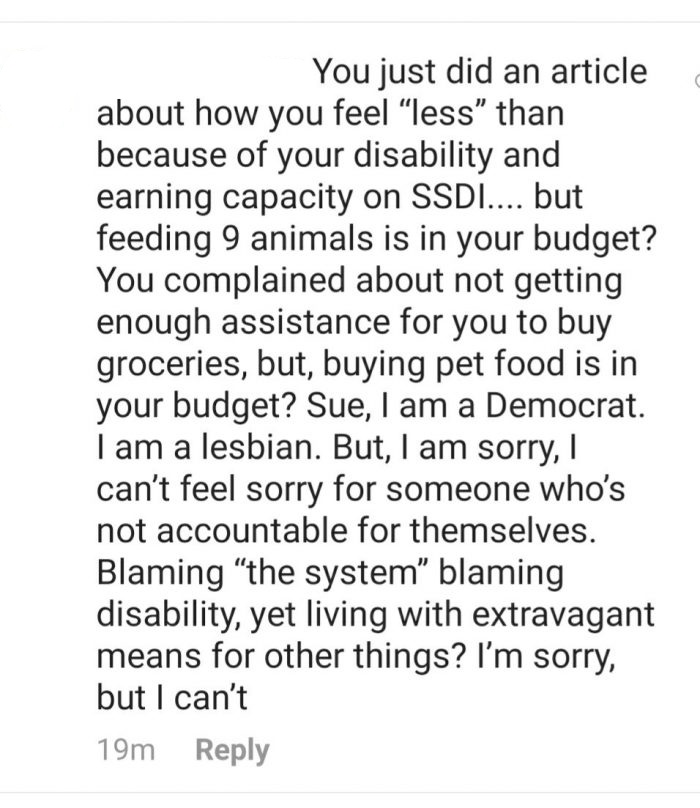 This is called shaming. This woman essentially looked into my grocery cart to monitor my purchases and condemn me for using her public food stamp funds to buy luxuries.

It’s the same thing, the same shaming behavior. Here’s how it works.

First, she incorrectly assumes that being disabled and an SSDI recipient means I do not deserve anything she perceives as luxury. In this case, she’s referencing cat food which is itself laughable. But she is deciding what is a luxury for my life based on her own values and the limited information she can glean from my social media content. That’s being judgemental and churlish.

Secondly, she incorrectly summarizes the articles and posts I’ve published on this topic. I do not know if she did not read the admittedly long essay or if she did not understand it, but her takeaways misrepresent my writing. Uninformed opinions do a lot of damage.

Third, she assigns the role of ‘pity seeker’ to me simply for publicly sharing my experiences as a queer, fat, disabled, middle-aged, white, cisgender, cat lady. Take your pick which identity she finds offensive because I post about all of them. Pity is rarely a positive term in any context. But I also know that when you feel really bad and are hurting deeply, you crave compassion and comfort and soothing, assurance even that you matter in this really hard world. No one wants pity. They want acknowledgement, validation, and support. Pity is tied to desperation and if we had strong supports for our neighbors, there would be less desperation.

So I shared a photo of my cats on Instagram soon after writing elsewhere about my experiences with disability, SSDI, and associated stigma. She makes a huge leap from those two actions to imply that one contradicts the other, connecting my status as a disabled SSDI recipient to my pet ownership as a desire for your pity. I’m not only asking for pity, but I abusing your concern by lavishly spending my resources to feed cats. Got that?

What’s the lesson here? Disabled and/or poor people should not have pets? Not use Instagram? Eat cat food rather than steak? Not hold systems accountable? Not be visible or vocal?

Notably, she identifies herself as both a lesbian and Democrat, suggesting that her shaming behavior is somehow grounded in those identities.

Democrats are supposed to hold up values like respect, dignity, independence, social safety nets, systemic justice, and compassion. Pity is not a Democratic value.

Democrats believe in a reality where disabled persons have pets and take good care of them. A reality where low-income people get to make choices about how they use their resources without a Greek chorus. Democrats understand that the welfare queen/social program scammer mythos was a political tool weaponized by Ronald Reagan, not an actual phenomenon. Democrats know the data around fraud. Democrats do not believe that some people deserve help/support and others do not based on our moral conduct or ability to do paid work. I’m also pretty sure Democrats are concerned about urban wildlife and homeless domestic animal welfare.

It would be very easy to defend myself here. I’m a basically good albeit flawed person. I do a lot of good works. I earned my SSDI by working. I foster cats. I’m a social worker, a survivor. I painstakingly folded analysis of my privilege, especially economic, into the essay. I had a horrifying traumatic childhood. I earned a master’s degree. I am among the deserving poor, I believe, right? If that’s a thing, I earned the benefit of the doubt, right?

That’s not the point and it doesn’t matter because I am a human being who deserves to have my basic needs met and to be treated with respect by my government and neighbors. Not because of things that I do, but because I exist. Period. I reject the false dichotomy of people being deserving and undeserving of government resources, compassion, or respect.

I deserve to post photos of my cats on Instagram to show off their cuteness regardless of my income level or disabled status. No one is required to look at them. It’s a transactional relationship between me and Instagram, not a public forum for scorn.

This is how shaming works. This woman takes an innocuous action – posting a photo – and ties it to other actions she finds objectionable. I crowdsource tools to help homeless cats, among other causes. I post blog content on IG. I discuss my day to day life as a person with a disability among other identities. But this photo was just a photo without any real context beyond the description of their activity.

The shame she lays on me is not just about being disabled, it is intricately tied to my audacious decision to talk about the stigma and broken process surrounding disability and poverty.

She’s concerned because I put luxury items in my shopping cart. Period. She, like the prototypical Trump supporter, feels aggrieved somehow that I am accessing luxuries that I am not earning with paid work. What’s more, I expect her and the system to treat me with respect, dignity, and fairness rather than groveling with humility for the charity I receive.

Basically, she’s alleging that I took her tax dollars and church donations and used them to pay my cell phone bill and buy a steak at the grocery store, so she’s pissed. Maybe she can’t afford those luxuries so she blames me for her situation? She got kicked by her boss so she punches down to vent her feelings? 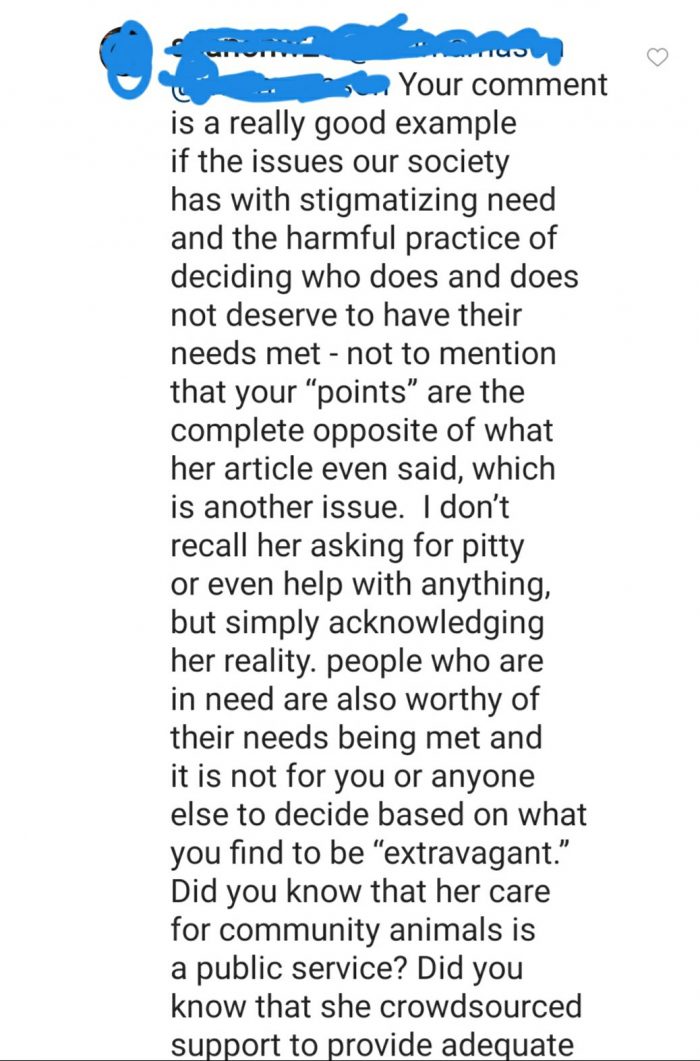 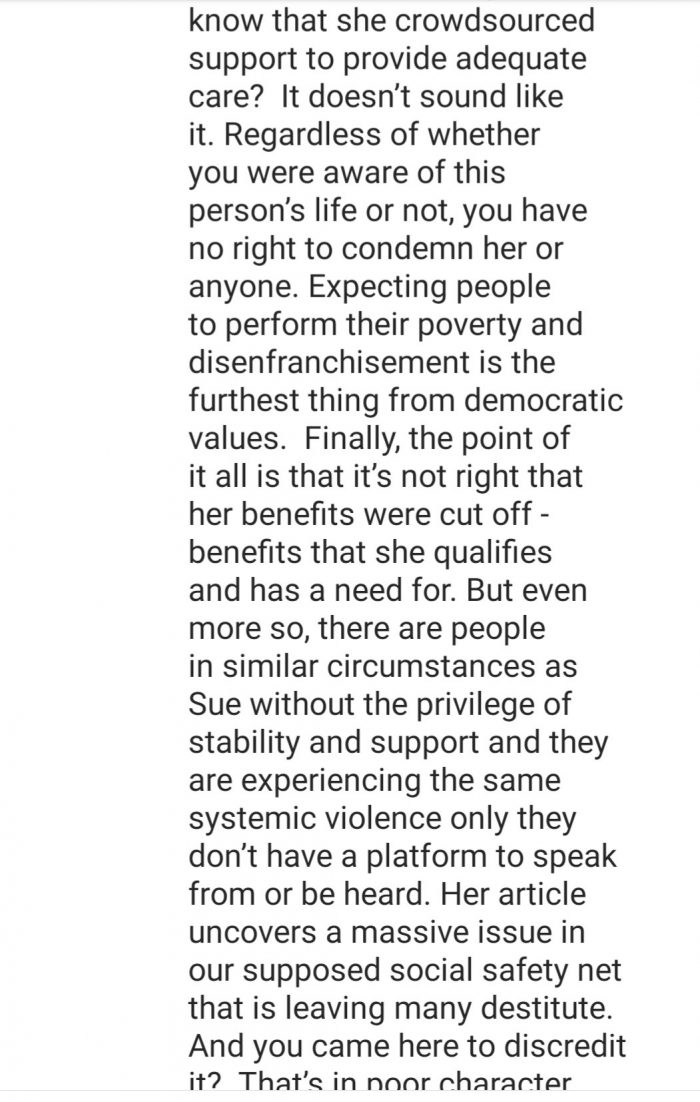 Then the OP clarified that if I can take care of cats, I can do paid work. 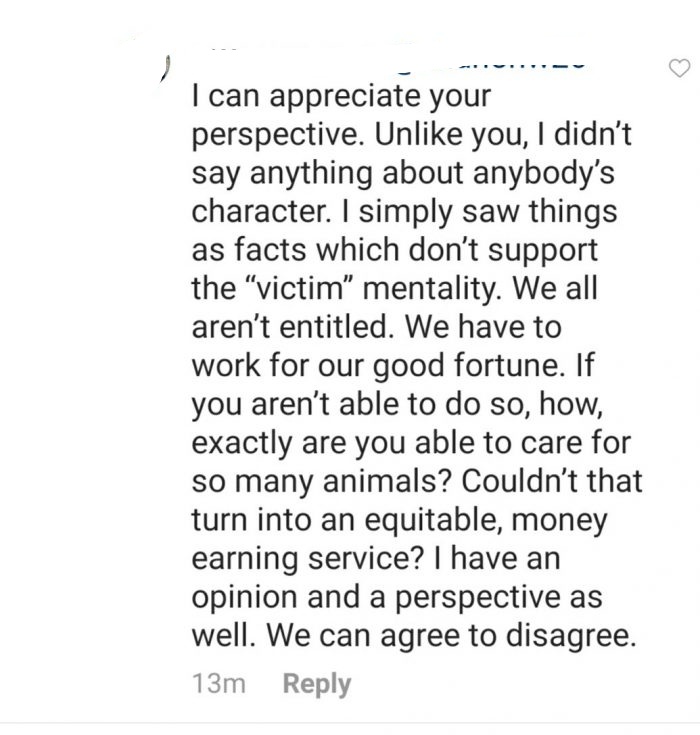 She jumped to a conclusion based on speculation that she considers factual. Her worldview is the lens through which she summarizes what’s best for me and how I am missing the mark. She feels morally superior to me and sees no problem in publicly excoriating for my perceived sins and failings. But to what end?

Tearing me down must do something for her – maybe she has an axe to grind? The fact that she tears down all of the people who are disabled and/or on public safety net programs while grinding me into her shame spiral is not her concern. They are acceptable casualties in her war of resentment and disinformation, just like they are for Trump and used to be for Reagan.

The reality is that people like her are a genuine threat to Democratic values and lesbian solidarity she professes to uphold. If she felt umbrage about her perceived view of my life choices, she could either disconnect from me and keep scrolling. Or she could actually connect with me as a real human being, not a cheap target on social media.

Whatever has aggrieved her or contributed to her bitterness, it wasn’t my doing. My SSDI benefits don’t take away from whatever benefits she’s entitled to. My cats aren’t eating her cat’s food. Even if I was asking for her pity, she’s not obligated to offer it.

It isn’t a competition. We are grown adults, not FOMA tweens. We should be able to feel and express compassion for other people who are struggling, not kick them while they are down and hide our bad behavior behind the fact that we ‘earn’ our good fortune (also, not true.)

This person is not better than me or you or anyone else, regardless of any aspect of her life. Maybe she had a bad day. But that doesn’t make it okay to throw stones that hurt innocent bystanders or reinforce traumatic stereotypes.

Here’s my shout out to all the wonderful people who care for animals and allow those critters to bring joy, happiness, companionship, and love into our lives. You are doing great.