The local LGBTQ community is abuzz with the revelation that Delta Foundation President Gary Van Horn has started a Pittsburgh chapter of the Rosco P Coltrane fan club and “unofficially” brought Allegheny County Sheriff Mullen, a few notaries, and his friend “Timmy” along with him. (see images below to interpret that allusion.)

Gary has been impersonating a deputy sheriff and other emergency personnel to the extent that he outfitted his personal vehicle(s) with actual lights and siren devices.

According to a criminal complaint filed by state police, Delta Foundation president Gary Van Horn used emergency lights in his car, and attracted police attention by directing traffic, while wearing an emergency vest, during a building fire last April. In a later incident, the police affidavit asserts, city police received a complaint from a Downtown pedestrian who said they were nearly struck by an undercover police vehicle. Videotape from a surveillance camera showed a car, with flashing emergency lights, that police identified as Van Horn’s.

When officers confronted him, Van Horn allegedly presented them with documents authorizing him to use the lights. Some of the documents appeared to be signed by Allegheny County Sheriff William Mullen. But “Mullen related he never gave Van Horn authorization … and he, Mullen, did not sign the documents that display his signature,” the affidavit says. “The signatures are not that of Mullen.”

I mean, what the heck is this? Queer yinzer Facebook has been roasting the story, in part due to the checkered legal history of Gary Van Horn and his Delta doings.

I read the affidavit myself. It is bizarre to say the least. My understanding is that he is facing three felony charges, five misdemeanor charges and two other charges I can’t decipher. But while folks may think GVH has hoisted his own petard and will face poetic justice ala Al Capone and tax evasion (that is, catching a mobster on tax evasion instead of actual mob crimes), I am not so sure.

Most revealing to me is that GVH did not actually resign from the Delta Foundation, he took a leave of absence. 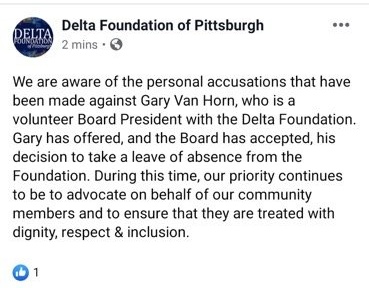 What does that even mean? And if reports that Central Wellness Outreach owner Dr. Stacy Lane had resigned in October* prove true, who is minding the store? There were only five board members heading into October.

My gut says “leave of absence” means he believes he’ll beat the charges or at least be able to knock them down to petty white-collar fines and perhaps some sort of probation. And he’ll be back with Delta as exonerated as Donald Trump.

There’s a lot of farcical material here, but I can’t help but think that GVH might have some genuine issues that he needs to address if he somehow thought this was something he could get away with. One of the things that caught my eye is the revelation that one allegedly forged document was dated 2014.

In the affidavit, GVH was on the scene of a building fire on S. Aiken Street in April 2019, lights ablazing and wearing an orange safety vest while directing traffic. He claimed that he was part of the Allegheny County Emergency Management Agency and authorized by an on-site member of the responding firefighters to handle traffic. Neither was true at least as far as the responding officer could determine.

His other offenses were related to driving with the illegally installed emergency lights flashing and producing forged documents in dense of those choices.

It isn’t so funny when you stop to consider that just six days ago, a fire destroyed the building housing the SisTers PGH Community Center, an organization dedicated to serving Black trans women and other trans and nonbinary neighbors. The fire began in another part of the building. Not only did SisTers PGH lose their space and their possessions, but a 29-year-old woman not connected to Sisters was injured when she escaped the building and had to be taken to the hospital.

A woman was injured, two families lost their homes, and our Black trans woman led organization lost its community center due to a fire. The long-term impact of this fire might ripple on for years, depending on the resiliency of the former occupants and Sisters PGH to recover from the financial and emotional losses.

It isn’t funny to think of Gary or anyone pretending to be an emergency responder in this situation, is it? Imagine you escape a building with your life and watch your possessions go up in flames on a cold December day weeks before Christmas and some jagoff is getting their jollies by pretend-joining in the rescue efforts? How would that feel? How would the trans folx who were counting on SisTers PGH being open that day or this week or in the future feel if they approached the building after the blaze and literally found GVH directing traffic, like he’s filming a sitcom segment?

I’m clearly not saying that GVH had anything to do with the fire in Greenfield, but as I watched this latest absurd Delta-related story swoosh into the headlines – I thought about the fire and the occupants swooshing out of the headlines even when they need help rebuilding, both SisTers PGH and the people who lived in the apartment. Just like any store about white cisgender gay men and lesbians gets precedence over stories centering Black queer and trans folks.

Fake firemen, anyone inserting themselves in a public safety situation under false pretenses, not funny. Dangerous even. And often, a sign of something seriously wrong with the person’s state of mind. It isn’t a prank or an extreme sport – we are talking about people’s lives.

This also came to mind – last year, when SisTers PGH was part of a protest action at the Alleghen County Jail, several individuals were detained because they were allegedly blocking a street (Second Avenue) that was part of the emergency evacuation route. So that’s also not funny, especially the part about the City of Pittsburgh arresting Black trans folx for exercising their First Amendment rights on behalf of even more vulnerable members of the community in the name of public safety. Gary got to turn himself in; the protestors were literally detained on the street.

None of this is funny, even though I opened this post with a joke about the bumbling sheriff from the TV show ‘The Dukes of Hazard’ as a sly reference to sheriffs and to the role of bumbling white men in propping white supremacy humor. But it isn’t funny.

SisTers has a fund to relocate their offices. They’ve raised $12000+ so far which isn’t really a lot when it comes to leasing a space and replacing the items ruined by the fire. I do not know if there is any fund created for the people who lived in the building or the woman who was injured.

I do know that public safety workers need to be able to do their jobs without interference from the community, period. They don’t need self-deputized helpers. They need to do the job to put out the fire and save lives and prevent it from spreading. They do not need to be scanning their ranks for a poseur.

It frightens to me to think that someone could use unauthorized lights to pull someone over or scare someone driving on Liberty Avenue. It terrifies me to think someone could interfere with a fire at my home. And that difference between being frightened and terrified, too, is tied up in my privilege as a white cisgender lesbian. That’s something I’ve learned to think about with deliberate intent, thanks in great part to the leadership of Black trans folx who said something in 2014, 2015, 2016, and to this very day.

What Gary did was unconscionable and while I am not the least bit surprised given his history, I fear that we may lean into the absurdity and miss the genuine threat his actions pose to everyone. His choices are not a joke now and they weren’t back in 2014 and 2015 when people like Michael David Battle and Joy KMT were saying something that most of us didn’t want to believe.

But who turned up yesterday at the City Court Building to represent the LGBTQ community? A Black trans woman, Ciora Thomas. She marched down there to hold GVH, the media, and the court system accountable when she should be able to focus on rebuilding SisTers PGH community center. The rest of us just passed around memes and shook our heads.

Once our tittering subsides, will anyone take a moment to reflect upon the larger issues here?

One, we need to stop building cults of personality around people who hoard resources and use their organizations to disburse them in little drips and drabs. You are laughing at GVH now, but what were you thinking and saying five years ago? Stop moving your collective eggs to another basket and hoping this time it will all be okay. Start investing in yourself and others, not just the grand vision of anyone who purports to “save” us. Learn from history.

Two we need to stop making jokes about GVH’s state of mind and really seriously consider if he should be helming the “largest” LGBTQ organization in the region. That doesn’t mean we start doing armchair analysis of his mental health. It means we, the LGBTQ community, take ownership of our community assets and hold ourselves accountable for whom we install in positions of leadership and authority.

Three, we need to invest our resources into diverse community groups to truly build up everyone, not just those who hold favor with deep pocketed benefactors. May I suggest?

Finally, ask yourselves – how much will you tolerate before you take action? What would it take? Impersonating an emergency management official is pretty serious. What if that happened during a fire at your home or workplace? What if you or your friend or your kids were falsely stopped while driving Downtown, even just for a minute? What if a person who thinks those are funny or acceptable choices is handling millions of dollars of your Pridefest resources and the person whose face represents Pittsburgh’s LGBTQ community to most of the world, right or wrong?

* Dr. Stacy Lane has informed me via Facebook that she resigned from the Delta Board in October. She sent me a partial image of an email with her resignation. I cannot confirm or deny it without more information. How would any of us confirm or deny any information regarding the most opaque LGBTQ organization in the region? I have no idea except to wait for the 2020 IRS tax filings that should be available in 2021?

Here are images of the affidavit. You can obtain this public document yourself by going to the courthouse and filling out the proper forms. 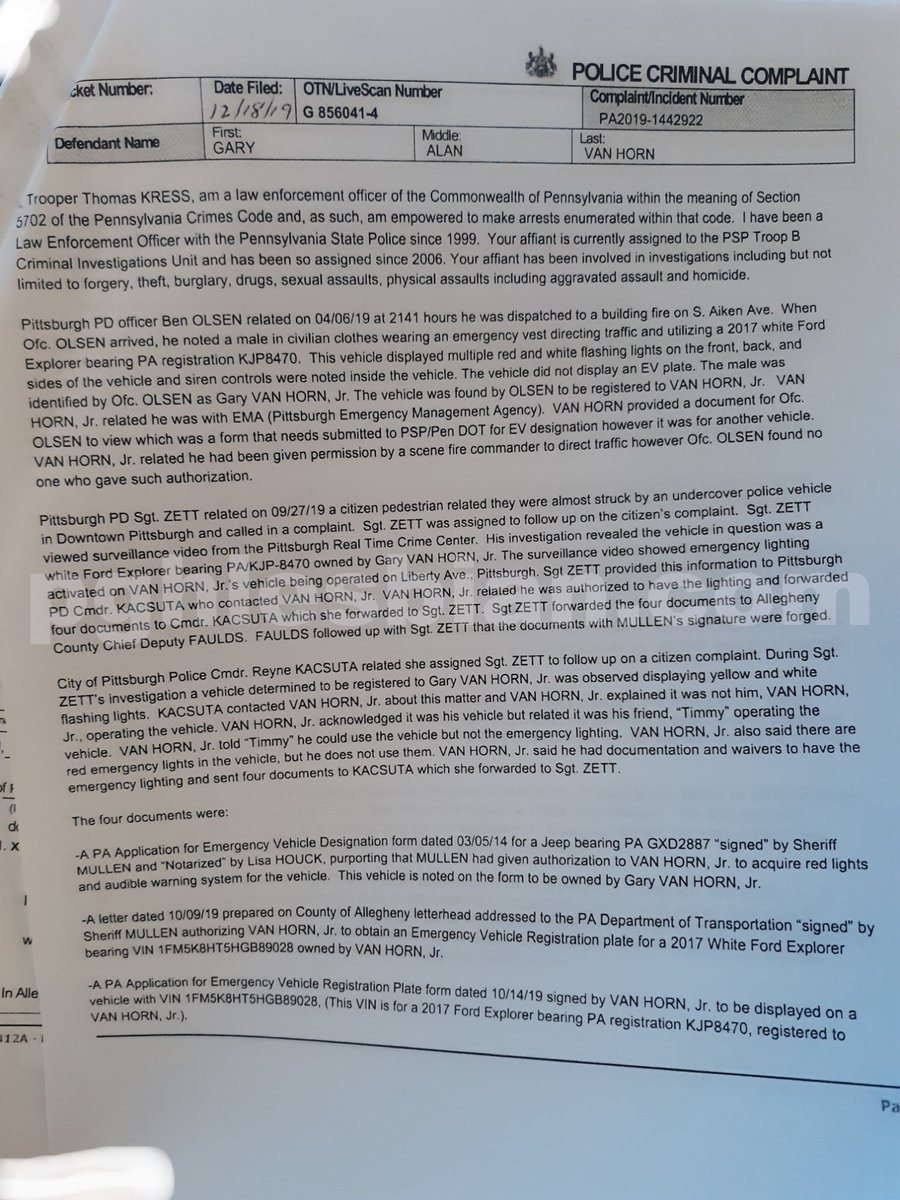 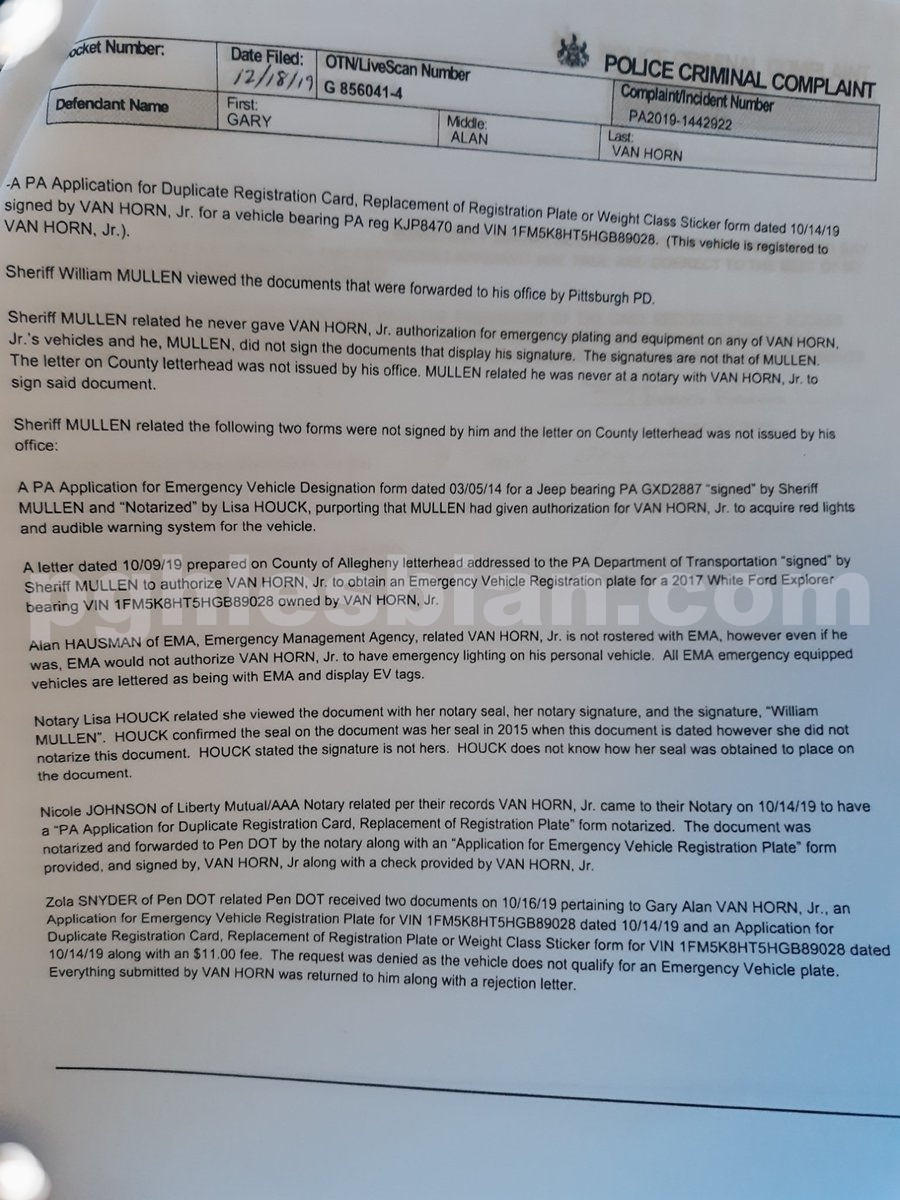