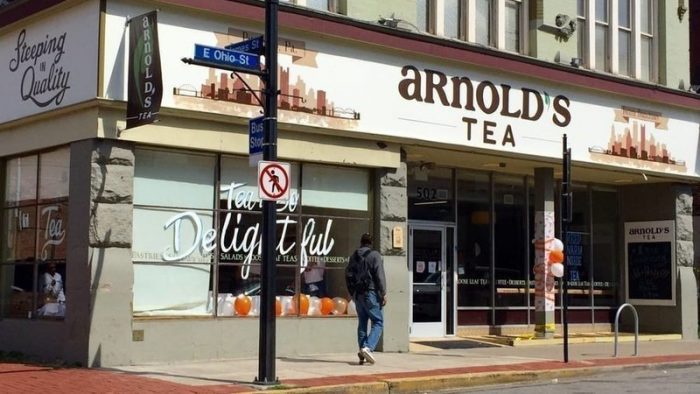 Arnold’s Tea is one of the best spaces on the Northside from early days under the ownership of Verna Arnold in 2015 through the current incarnation with Chef Claudy Pierre.

It is a gorgeous roomy restaurant with plenty of comfortable seating right in the heart of East Ohio Street on Pittsburgh’s Northside neighborhood of East Allegheny (aka Deutschtown) I’ve often wondered to myself how a tea house could remain financially viable, a situation that the change in ownership seemed to address by adding the support of Pierre’s catering business.

I hold most of my meetings at Arnold’s. I like the coffee (ha) and the sandwiches and the access to nearby parking. It is easy to find a nook that is quiet. And it is important to support Black owned businesses.

So I was dismayed to read that The Northside Leadership Conference and the Historic Deutschtown Development Committee are trying to close the business after the current owner experienced some financial setbacks. According to the petition on Change.org, he has caught up on his debts and is on track to generate revenue so why not work with him to address any concerns?

And what concerns would a historic preservation group have with a business that’s been open for four years? The building was renovated before it opened. Is there some requirement Pierre has failed to meet?

East Ohio Street has been changing (same with Western Avenue) and most of these changes leave lower and moderate income neighbors behind. The CDC’s target nuisance properties, but I fail to see how such a gorgeous useful space could remotely be a blight.

Having a successful Black owned business in this corridor is important for the community and crucial to the message that we are not going to turn out like East Liberty, with all of the Black identity erased (even the alleged future.)

Arnold’s Tea and Adda Coffeehouse on Western Avenue are very important because they belie that historic pattern. Arnold’s is Black owned and Adda is owned by a man from Bangladesh. I love having to decide between them when I schedule meetings. I am proud that the Northside has at least two prominently owned cafes with ties to Black and Brown people of color. And they are different enough to warrant plenty of support.

I wonder if the recent development has tightened the purse strings and causing a Black owned business to be less desirable? I can only imagine that the new Comfort Inn and other business development would make a thriving tea house desirable. And I wonder if now that the foundation has been built, the commitment to keeping a Black owned space as the crown jewel of the development has faded – in other words, are they forcing Chef Pierre out to bring in another owner who may or may not be Black?

It is not lost on me that a few blocks away, local business owners assaulted two Black women over $17 in gas launching days of protests and shutting down the business. They beat those women into the ground. But unless Exxon takes swift action to pull the franchise agreement and/or the DA takes swift action to enforce the law, they’ll be back open for business.

Business owners have the blood of Black women on their pavement and they will stay open, but a Black male chef makes financial mistakes and ends up potentially losing his business?

Sitting over here in the land of a future Lagoon in Manchester, I don’t feel good about any of this. I’m beginning to believe that the future of the Northside is not as Black as it should be. Or so the powers that be think. They are wrong.

I urge you to sign the petition to show your support. I urge journalists to dig into the business details.