A t-shirt is a functional object that most people can use and wear and enjoy, but it can also be a way to carry an affordable piece of art around with you on your body, or make a statement that can allow you to connect with other people. Getting into the t-shirt business has made me totally rethink my wardrobe as a means of self expression. – Etna Print Circus, December 2017.

As you know, the Dick’s Sporting Goods Pittsburgh Marathon has teamed up with Chick-fil-A as a signature sponsor of their youth programming for what is allegedly multi-year six figure donations.

Queer people and allies are enrolled to participate and looking for ways to resist without giving more visibility to Chick-fil-A. (Click here to read our coverage of the marathon sponsorship. Click here to read how much hate and vitriol I personally experienced because I resisted Chick-fil-A, including a bunch of local folks who might be at this event)

My suggestion? This shirt 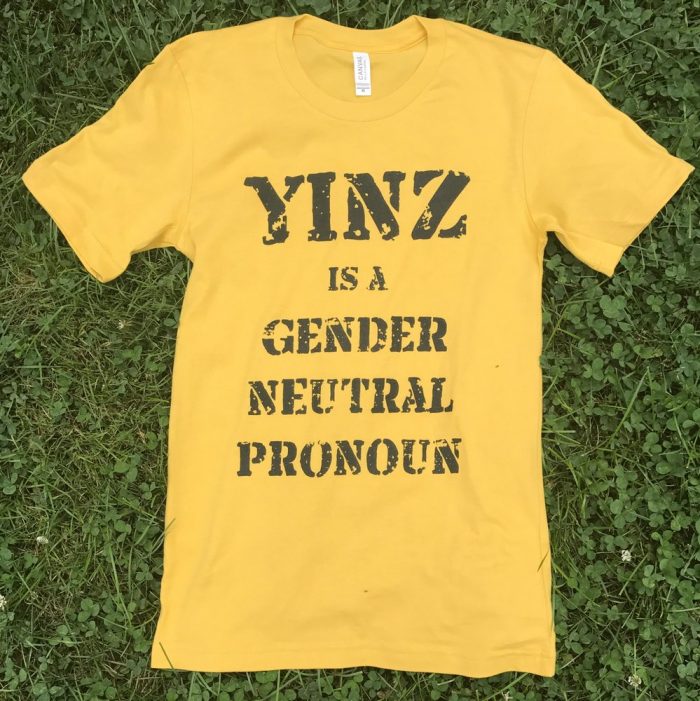 This shirt was created and produced locally via Etna Print Circus. It is available for $25 plus shipping and there is plenty of time to order it for the May 5 Marathon.  You can also find them at multiple upcoming events and/or make arrangements to pick up your order in Etna directly. Follow them on Facebook and/or Instagram for updates.

Note – this is 100% my idea. I don’t want anyone to knock Etna Print Circus for my suggestion. And by all means, if there are other pro-LGBTQ shirts, buy those. Put links in the comments. I just think this is the best option, but it is not the only one.

They have other great shirts that might work for you, too, including sleeveless tanks, etc. We published a Q&A with Etna Print Circus back in December 2017 that might help you make this important decision.

ThinkProgress reported earlier this week that the company’s foundation gave $1.8 million to discriminatory groups in 2017.

And it is important. This has been a victory for Chick-fil-A. And a clear message that if anti-LGBTQ orgs are willing to spend six figures on sponsorships, our community recreational and cultural organizations are willing to turn their backs on LGBTQ folx, including our youth. Individual acts of defiance and resistance during the marathon are important. The staff and board will notice. The media will notice. Most importantly, LGBTQ people and their families will notice.

Sometimes when work piles up it’s hard to remember there’s emotion and purpose behind it. It was really nice to be reminded of that and see the positive reaction from people. – Etna Print Circus

UPDATE: I spoke with the Etna Print Circus team and they promised to be fully restocked on all sizes of this shirt on Friday (April 26) if you were unable to find your preferred size originally. So you can order and still get your shirt for the Marathon if you like. Or buy it as a gift for someone in your life. It is an investment in a company that is the antithesis of everything Chick-fil-A represents.

Check out this awesome direct action from Cincinnati where activists were able to ‘hijack’ the Zamboni during a Chick-fil-A sponsored hockey game and display Chick-fil-A is Anti-Gay signs in the middle of the rink. Nicely done.