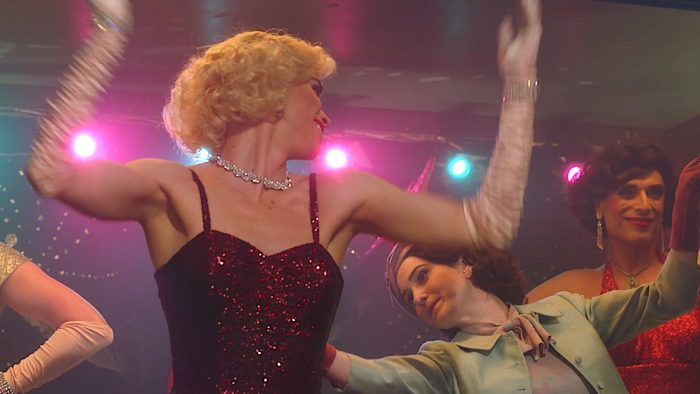 Picture: Midge Maisel (Rachel Brosnahan) zips up the dress of a Parisian drag queen. (Screenshot from “The Marvelous Mrs. Maisel”)

So I just finally started watching “The Marvelous Mrs. Maisel” on Amazon Prime.

I was resisting, because the reviews were so glowing, and I thought, “Meh, nothing can be that good.”

And then it kept picking up awards — Golden Globes, Primetime Emmys, Screen Actors Guild — and so finally, one night, I started watching it.

Now I’m almost done with Season 2, and OK, I’ll admit it: It’s pretty darned good. (It’s also seriously flawed in a lot of ways. I’ll get into that in a minute.)

But what struck me recently was how much of an LGBTQ allegory the show is, and I’m wondering if any other queer people have noticed.

Hear me out on this. (Spoilers follow — if you want to watch “Mrs. Maisel” and haven’t yet, you may want to stop reading.)

Created by Amy Sherman-Palladino (“Gilmore Girls”), “The Marvelous Mrs. Maisel” is the story of an Upper West Side socialite, Miriam “Midge” Maisel (Rachel Brosnahan), whose comfortable life in 1950s Manhattan gets turned upside down when her husband, Joel (Michael Zegen) has an affair.

Joel has been pursuing — not too successfully — a stand-up comedy career, mostly by doing open-mike nights in a Greenwich Village club. When he leaves Midge, she gets drunk, goes to the club, and gets up on stage to bare her soul, hilariously and profanely. The enthusiastic reaction of the audience and club manager Susie Myerson (Alex Borstein) leads her to pursue her own career in comedy.

I find the acting and writing wonderful, and the production values are superb — Brosnahan’s wardrobe is to die for. And even more surprising to me — Brosnahan’s monologues are mostly pretty funny! (Movies and TV shows, for some reason, often have a hard time depicting comedy. Remember Aaron Sorkin’s “Studio 60 on the Sunset Strip,” which was about a fictional “Saturday Night Live” type show? I found the fake sketches really unfunny, which hurt the realism of the show, for me.)

I also love seeing real-life comedians of the era (especially Lenny Bruce) being integrated into the world of “Mrs. Maisel” as flesh-and-blood characters.

But what I really didn’t expect about “The Marvelous Mrs. Maisel” was that I would relate so strongly to Midge Maisel’s experiences, and I’m wondering if any other LGBTQ people are having the same experiences.

Here’s what I connected with:

Living a lie: At the beginning of the series, Midge Maisel has been forced to be a person she doesn’t want to be — a shallow socialite, a passive housewife and a doting mother. And she’s living her life to accommodate other people — her parents, their social circle and her estranged husband.

How many gay and trans people have felt like we need to “act straight” or pretend we’re a gender we were assigned at birth? How many bisexual or asexual people have been denied their actual existence, and told there’s no such thing as their orientation?

Compartmentalizing: Midge has to maintain multiple lives — she is a sophisticated Upper West Side socialite to some people, a demure B. Altman salesgirl to others, and a foul-mouthed comedian on stage — and finds herself in serious trouble when those personas start to collide.

How many LGBTQ people find ourselves closing off parts of our lives or leading double lives?

Being a workaholic: Because Midge can’t stay in touch with her real emotions, she remains busy, constantly, to avoid listening to her own self-doubt. She bases her own self-worth on being invaluable to her friends, and by seeming to be effortlessly beautiful and charming. (In fact, as we see in some early scenes, she actually has to put a ton of effort into keeping up appearances.)

She’s always operating at a high level of competency and energy, so when she stumbles (like when she tells off-color jokes at a friend’s wedding, or when she bombs on stage), it feels devastating and she beats herself up endlessly. Oh, boy, do I relate to those feelings!

Finding a chosen family: Midge’s real family can be controlling and, at times, cruel. So she finds a chose family (Susie, Lenny Bruce, her friends at the Stage Deli) of people who accept her for who she is.

When Midge’s father finds out she’s doing comedy, he’s ashamed, angry and confused. When she finally “comes out” (as a comedian) to her family on Yom Kippur, she’s met with confusion, anger, rejection — and some very limited acceptance.

How many queer people have felt this rejection from family and friends — and have replaced those people with a “chosen family”?

Now, to be honest, to enjoy “Mrs. Maisel,” you do have to be willing to surrender yourself — and overlook some pretty serious problems.

For instance, there are a lot of anachronisms — characters use slang from our era, not the 1950s and ’60s.

Midge Maisel leads, in many ways, a fairy-tale life of privilege which she rarely examines. As her comedy career blossoms, she all but abandons her two small children with babysitters, nannies and her parents.

And as Rokhl Kafrissen wrote for Alma.com, the entire show seems to take place in a version of 1950s America where “anti-Semitism, racism, homophobia and even sexism are barely a whisper.”

From an LGBTQ standpoint, there are other problems with “Mrs. Maisel.”

Take the character of Susie — who I love. As portrayed by Alex Borstein (who is a delight — she has won an Emmy and a Critic’s Choice award for her work on “Mrs. Maisel,” and rightfully so), Susie is a hard-drinking, hard-talking butch who lives in Greenwich Village, wears men’s clothing and has little to no interest in their flirtations.

Yet as Sonia Saraiya, reviewing Season 2 for Vanity Fair, noted recently, “Mrs. Maisel” never addresses the obvious question: Is Susie a lesbian, or what?

And when Midge meets a group of drag queens in Paris, she can’t believe her eyes.

Really? “Female impersonators” were certainly playing clubs throughout New York City in the ’40s and ’50s. Hell, had Midge never seen Milton Berle? Christine Jorgensen would have been contemporary fo her, too.

Like I said, “Mrs. Maisel” is full of anachronisms, and for all of its charms, it’s far from perfect.

It’s kind of like a 1920s-style gown I bought from Amazon for a party last year — it looks great from a distance, but up close, you can tell it’s a fake, and if you start pulling any loose threads, it starts to unravel.

Still, I had low expectations for “Mrs. Maisel.” All I was expecting was some pastel-colored fun set in the 1950s.

I didn’t anticipate there would be a deeper level to the character of Midge Maisel. And I certainly didn’t expect her life to be a reflection of my own. For now, I’m eagerly awaiting Season 3.