Spoiler – this adaptation of the Charles Dickens classic gets everything right about the systemic and institutional issues Dickens addressed without the sentimental Christmas washing we are usually handed. The playwrights here understand, as I like to say, that it wasn’t so much that Scrooge’s change of heart saved Tiny Tim as that fair wages, access to healthcare, and a worklife balance for Bob Cratchett saved Tiny Tim. 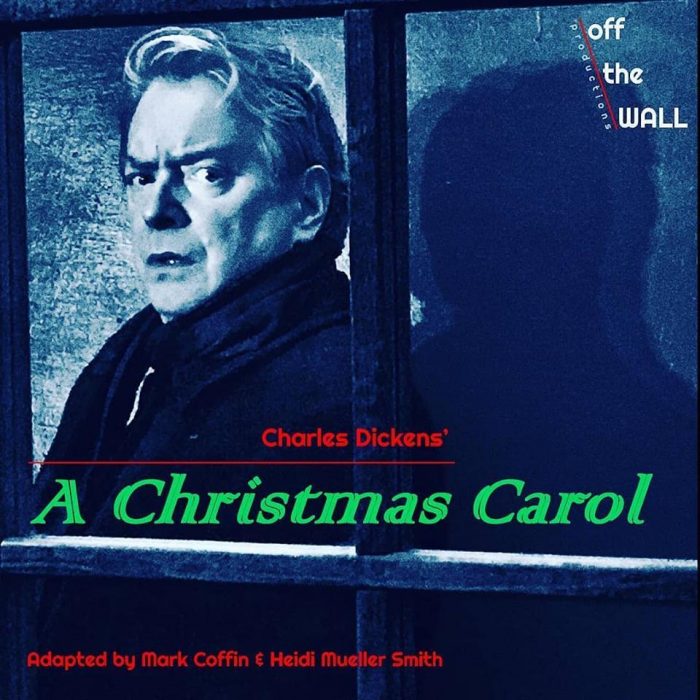 Ledcat and I took our niblings (12 and 10) to see this show. Both were familiar with the story, but had mostly watched children’s adaptations like Disney and so forth. The elder nibling is a student at CAPA and told us they are studying this one of their classes. I was a little concerned a one-man show wouldn’t engage them for 90 minutes, but I was wrong. The younger nibling had never been to a community theater setting before so he was also entranced by the whole concept of having a play in such a small venue where the actor was literally arms lengths away.

Mark Coffin co-conceived, co-wrote and performed in this adaptation. He plays all of the roles which is an impressive undertaking that illustrates his range and reminds us of the precept There but for the will … go I. Coffin’s narrator and Ebeneezer Scrooge take us through his awakening experience in a series of scenes that go right to the core of the story. Using light and sound effects with minimal props, the journey convincingly travels from an 1843 moneylenders office to the isolated bedchamber and back to Scrooge’s childhood school circa 1790 to some date further in the 19th century where a graveyard might be.

Coffin’s transformation from character to character using a few simple costume items along with his body language and voice is mesmerizing and easy to follow. It was a little bit difficult to hear him when he turned away from our part of the audience, but familiarity with the story more than compensated for a few lost bits of dialogue. He convincingly represents with a degree of faith at least 15 different characters with his only costume change being a jacket and a shirt that is sometimes tucked and sometimes not.

I’ve read this novel and watched countless adaptations over my 48 years so I was not prepared for how deeply moved I felt during some of the scenes, particularly toward the end. My eyes glistened during several moments as Scrooge and the narrator’s characters seemed to meld together as he grew increasingly aware of the need for him to be a better man and create a better world, to narrate his own story in his own voice.

Scrooge had the power to do good as an individual man, a benefactor if you like. But he also had the power to do good as a man of privilege within a system that valued his sort. He could pay fair wages and make sure workplaces were properly heated and so forth. Scrooge realizes that to be a better man, he can’t just support charities. He must change his entire worldview. Benevolent dictators don’t save the Tiny Tims of the world. Or the Scrooges.

I was quite taken with the realization that Scrooge’s childhood and early adulthood poverty pushed him to accumulate wealth, the only solution he saw, to change his life. He failed to realize that the accumulation of wealth must also include the welfare of others. Perhas when we wonder about greed among those 1%ers who have so, so much already – we need to remember that they are the fortunate but still damaged byproducts of industrialization and capitalism. There are certainly plenty of examples of rich people who have developed that self awareness and do more than simple acts of charity, but this reality shows us that capitalism needs more constraints rather than fewer constraints to be useful to most people. And it took the intervention of another 1%er (Marley) to convince Scrooge to revisit his worldview. All of the rest of the people – Fred, his sister, Belle, the Cratchetts, the neighbors – all were in his life doing exactly the same thing the day before, even as memories. None of their realities had forced him to take a closer look. So there’s something to be said for rich people “collecting their own” as well recognizing that checks and balances are necessary. In case they don’t. Which they don’t.

So that being said, I would absolutely encourage you to catch this interpretation of the Dickens classic while it is at Carnegie Stage. You only have one weekend left to do so. Thu., Dec. 13, 8 p.m., Fri., Dec. 14, 8 p.m. and Sat., Dec. 15, 8 p.m. Tickets range from $5-35.  Note that members of the ARTS community and residents of Carnegie can purchase tickets to any performance for $10.

off the WALL productions is a fantastic arts organization with a wide rage of alternative productions and performances. Since off the WALL moved to Allegheny County in 2012, they have staged 27 productions, both in Carnegie and New York City.  Of those 27, TWENTY were written or adapted by women, ALL were stage managed by a woman, EIGHTEEN were directed by a women, and FIFTY-FOUR female designers were employed.