Pronouns: He, Him, and Hey You!

How do you describe your identity? Of all the things that define my identity, in many ways gender is low on the list for me personally. My identity is most defined by what I do. I am a cartoonist, maze artist and storyteller. Even when people describe my gender, it is is usually preceded by my work, for example “Joe Wos, the maze man?” or “You know Joe, that cartoon guy?”

What I do is who I am. I also know that who I am today, might not be who I am tomorrow.

Of course mazes have always been around! They are probably the oldest form of interactive gaming. It’s one of the things I love about mazes, they are a collaboration between the artist and the audience. They are never truly complete until they are solved. My mazes are unique in that they feature lots of cartoon illustrations integrated into the maze itself. I think they may be a manifestation of the inner workings of my brain. I’ve talked with other maze artist and have found that many of us have been diagnosed with Bipolar disorder. There is an interesting study there for someone.

Mazes weren’t just my escape they were my calling. It took me a long time to realize that. But when I look back at every tough time in my life I see now that I used mazes to cope. Ultimately mazes were my path, and hopefully as long as I keep drawing mazes I’ll never reach the finish.

Tell us about the first maze you remember drawing? My first mazes were probably when I was about 6 years old. My uncle worked at Westinghouse and would bring me over giant boxes of connected dot matrix printer paper. I would make mazes that were 6 feet long. I would then take them to school for friends to solve. It was a way of connecting with people for me.

If I really liked someone I would draw them a maze that would feature their favorite things. Every now and then an ex from ages ago will send me an email with a maze I drew for them. It’s fun to see those memories but I also hate seeing my older work. It’s always awful to me. When people ask what my favorite drawing is the answer is always “the next one.” I am constantly learning and constantly improving. I look at mazes from just a year ago and think they are horrendous! But I’ll look at today’s maze thinking it’s wonderful, but knowing in my heart a year from now I may hate it.

Every few years I redraw an Alice in Wonderland maze. I can see how my style has evolved over the past few decades because I have kept those and it’s interesting to see how much I have grown.

What is the secret to solving a maze? My mazes are much more difficult than most for a few reasons. First, most people know the trick to solve a maze backwards. (That’s cheating!) But I know most people cheat. So I create my mazes both forward and reverse. The reason it’s easier to solve a maze backwards is because mazes have multiple exits and paths from the start but only one path into the finish. So by reversing you have only one path to follow. However I draw my mazes with multiple paths from the finish. Sometimes it’s actually harder to solve that way on my maze.

Another trick people use is to follow the right wall. But because my mazes feature illustrations that “right wall” may not exist in some sections of the maze and it throws things off.

My mazes also feature illustrations, and the human mind tends to close of lines to complete images so they make sense. So while there may be an open entry in a drawing of a chicken, the mind will sometimes close it off. So one of the tricks to solving my mazes is to ignore what you think you see, and think about what you truly see. My mazes feature a lot of illusions too.

Ultimately the key to solving a maze is about patience and persistence. Keep trying.

It’s really hard to pick a second favorite! I love hedge mazes so my 2nd favorite is actually a historical long since gone maze, the “original” labyrinth of Minos. It kicked off a long history of mazes in literature and mythology that last to this very day. My favorite labyrinth in Pittsburgh is the one in East Liberty Presbyterian Church. Though my dream is to someday design a hedge maze for the Phipps Conservatory!

I can’t help but think about the parallel between your books of  ‘dead ends, illusions, twists, and turns that increase with the difficulty level’ and actual political life in all 50 states. Could solving all 50 mazes actually be a political coping mechanism? Mazes are a wonderful metaphor for life. There are a lot of dead ends, sometimes you have to go back to go forward, there are twist and turns along the way, but so long as you just keep moving, keep trying and learn from your mistakes, you make it through.

I am a very outspoken person politically, but I keep politics out of my mazes. I want them to be for everyone so I try not to offend. But that doesn’t always work.

I had a dancing chicken wearing a tutu in one of my mazes and I got a nasty email accusing me of pushing ” a liberal transgender agenda” because it was a rooster in a dress! Maybe he was right and subconsciously I have an agenda, but if I do, I blame Bugs Bunny.

When I was drawing the A-Maze-Ing America book I tried very hard to make sure it was diverse and representational of the country in the historical figures, and attractions featured. So there are a lot of women, and minorities featured. I don’t like to be heavy handed, but I do like to be fair and just. That’s not a liberal agenda, it’s basic human decency and respect. History has left out a lot of great people, the least I can do is feature a few in my silly little cartoons in the hopes that a kid will go “whoa, who is this? I want to learn more.”

What other books have you published? I have four maze books; A-Maze-Ing Animals, Myths and Monsters, Maze-O-Zoic, and A-Maze-Ing America, all from BES Publishing. I also co-wrote a book on the top 100 animated TV characters called An Animation Celebration from Lyons Press and of course my very popular book The Three Little Pigsburghers as told in Pittsburghese from Heinz History Press. I also have about 20 other books in the works that I am starting to shop around.

You’ve been a contributor to this blog in the past and identify as an ally to the LGBTQ community. Why is that important to you? I am a real believer that we are all just one people on a minor planet in the universe. If there is intelligent life out there they aren’t going to see, black and white, gay and straight, they are going to see human and will probably judge our species pretty harshly for the way we all act toward one another.

There is a reason the LGBTQ has appropriated the rainbow as a symbol- they bring a splash of color and vibrancy to our gray dull world. I think it is wonderful that the word “gay” has a dual meaning because many of the wonderful LGBTQ persons I have known make this world a lot more gay in every single way.

Where can readers purchase this (and other Joe Wos) books? Support your local bookstores! Penguin Bookshop, Mystery Lovers Bookshop, the Heinz History Center, and many more. Of course you can also get them direct from me at www.mazetoons.com or if you prefer they are available at all the usual online retailers. 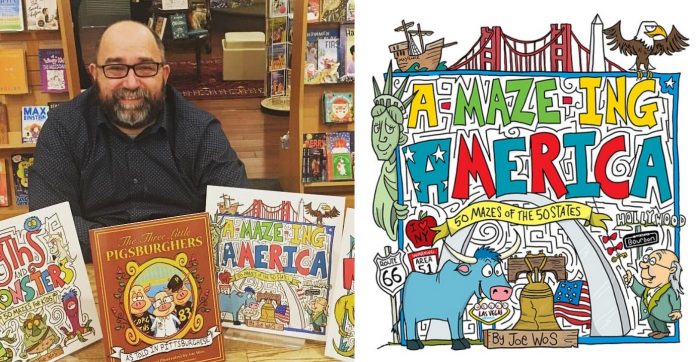