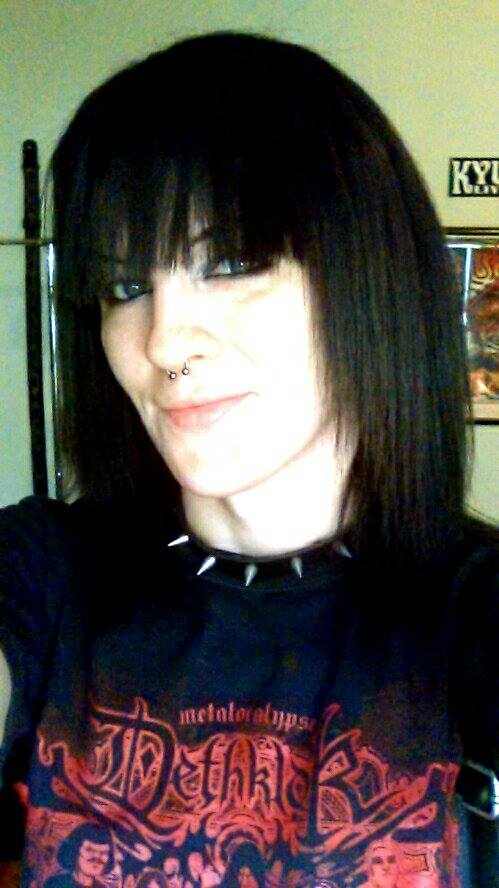 How do you describe your identity? I present as female 100% and feel that I’m finally who i am today, my love for all that is human has ever grown and have found that I am what is called a “Pansexual”. I have an ever growing love of dresses and shoes and makeup and things that shine and sparkle. I’m still a musician that plays many instruments and still pursue and inspire to be a career musician. Needless to say my personality hasn’t changed much but has started to be better defined through my own characteristics and self awareness.

Please describe your coming out experience. Where did you find support? What challenges did you face? Coming out for me was like hitting the ground running, asking everyone that was a friend to me how they would feel is i told them i was transgender and telling them that i was afterwards. At first allot of my friends told me that they didn’t care that they were happy for me. Some where not too sure what to think so i didn’t pressure them into thinking about it too much. When i started the actual transition process i was freshly out of a 5 yr relationship working at a private gym and living on my own with roommates in a nearby neighborhood from downtown. After awhile i started seeing allot of my friends dropping off on communication with me or involving me in outings that would have regularly happened when i wasn’t in transition. So after several months my friends dwindled down to a select few and by band mates which kept me going. Then the day came when i was dropped from my band with the reason being told that “I don’t think having a trans person on the drums is a good idea and would only hurt the bands reputation”. My heart sank and i felt a tremendous loss with only having not even a handful of friends left i felt alone and depressed beyond what I’ve ever felt. It took me a long time to find some friends that accepted me for me and not who i use to be or was pretending to be. Through that i found a best friend who gave me strength and support through encouragement and strength. Shortly after a few months i started looking for a new place to live allot closer to where i was working and found a household of trans and queer punks that gave me the sense of acceptance and belonging for once in my life i was truly happy. This did not last long, about 2 months after moving i had lost my job without any description as to why. I had also lost a newly established relationship with someone that was living with and sharing a bedroom with me. But at that point i had to try and pull together what little resources i had which wasn’t much while asking my newly turned ex to help out and we would remain friends and share a room together. Every day after losing my job i went out and tried to apply to anywhere that was hiring but none seemed to be even interested in giving me a chance. At one point when things were getting really bad i started as a web cam model to try and pay for rent, bills and feed me and one other person,i had also sold allot of my personal possessions to try and make ends meet. Then on one unfortunate day i had had enough of sharing a room with someone who wasn’t helping me not struggle and she was moving back to her home state as well. I had told her that i need my room to myself that she would have to stay somewhere else in the house until she was leaving but having her turn around and turn all of my roommates against me. This action caused the head of the house hold to tell me that they wanted me to move out effective immediately not caring that i had literally nowhere else to go, no ones house to stay at with little to no income. Facing homelessness sent me into a deep depression to where life for me seemed bleak and non-existent. I had lost all of my friends and had no one to turn to. But before that all happened i had started a new relationship with someone just a week before what happened and i was to go and stay with her over the weekend before the events that happened had happened. After crying heavily and talking myself out of suicide i pushed back my tears enough to call her and had meet her down at the transit station in downtown. She told me i could stay with her till i found out what i can do but then turned into me moving into her house shortly after staying with her after a few weeks. Now I’ve been living with her for about 2 months and have been allot happier that i could have ever imagined. She is amazing and i don’t know what i would have done without her and i thank all the stars that i meet her and that were together. Now I’m currently looking for a job around the area that can bring in some monetary income so i can start contributing on my end with finances. The search still continues to this day but with all the conservatives that live in the area i fear for my own safety but have to suck it up and at least try.

Editor’s Note: If you are experiencing suicidal thoughts, please reach out for support. The National GLBT hotline has online and telephone resources 1-888-843-4564.

How would you describe yourself NOW in terms of “being out”? I carry myself allot better that i ever have before, my confidence is much greater and have gained a better sense of living. Being happy that I’m now who i am and not pretending to be someone i never was has lifted a great deal of weight off of my shoulders and has given me hope and something to look forward to.

Tell me about the first LGBTQ person whom you met. What impact did they have on your life? Having known the feelings that I’ve had for years, finding someone that would be able to answer all the questions i had would have seemed impossible. One night being out with friends i was told that the one person i had meet was Transgender and that she would be able to answer questions that i had for so long been searching the answers to. After the night out this person was driving me home and i started off before asking questions that our friend had told me that she was transgender and that i had questions about being transgender for i too truly knew that i was as well. At first she was quite mad that our friend had said anything but as i went on to describe my position things took a turn for the better and a conversation was started with most of my questions answered. From that day on we became very close friends and drawing inspiration from her helped guide and aide me in starting my own transition.


Past or present, favorite LGBTQ character or creator in television, film or literature? Please tell us why. Laura Jane Grace: lead singer of “Against Me”
She gives me hope that as a transgender musician that i can still become a career musician.

How do you stay informed about LGBTQ issues? I’m a part of a few groups online that help keep me informed on issues that are current these days. I’m also an assistant and on the board for “Proudhaven” which caters to homeless LGBTQ+ youth and adults.

Describe your geographical community. Where i grew up was not LGBTQ+ friendly, it wasn’t till i moved to the city that i had a sense of community and safeness. My current location is definitely not LGBTQ+ safe but i also don’t go out of the house in the area unless I’m in a vehicle.

Describe your local or regional LGBTQ community. I have a few friends in the community but i mostly keep to myself.

Tell us about your access to health care in Western PA. Has it been LGBTQ competent (or not?) My health care has been very forth coming for me, it covers the cost of my medication and from what i understand it covers my SRS if and when i choose to receive “TheBig Surgery”.

Are there issues impacting your LGBTQ neighbors that aren’t visible or part of the local dialogue? There is no LGBTQ+ neighbors in the area that i live, when i was living i the city it was quite nice because it was a melting pot of everything you could have imagined. I still experienced a certain degree of discrimination but wasn’t as fearful as i am now in my location.

Please share a lived experience, anecdote or fact about life as an LGBTQ person in your community. Keeping your head up and walking with confidence has taught me that when you do so that your more likely not to be bothered by those who would seek to bring you down or through hurtful slander.

Beyond discrimination, what other barriers create challenges for your LGBTQ neighbors? acceptance and equality.

What LGBTQ friendly resources are available for your neighbors?  In the city there are a few like “Persad” and the “GLCC” when it actually helped those in need. There are other organizations that I’ve heard about but haven’t closely looked into them. Two organizations that I’m involved in are “SisTersPGH” and “Proudhaven” both are geared towards helping better the community through action.

What is your greatest fear for the LGBTQ community in Western Pennsylvania?  discrimination and hate crimes due to an uprising of hatred lead by the new presidency.

What is your greatest hope for the LGBTQ community in Western Pennsylvania? That life will one day be granted equality and love for one another through coming together as a community, as a whole and not be a segregated difference in society.


What can allies do to support your LGBTQ community? Help fight for equalize and fight against hate.

How can gay men and lesbians support the bisexual, transgender and queer members of our community? By loving one another and recognizing were all one.

What motivated you to take part in this project? wanting to get my story out there in hopes that someone can relate to what I’ve gone through giving them hope that there not alone or the only ones out there that are going through hard times and fear.

Finally, what question should I have asked? Please also share your answer. You did a pretty good job with the questions and i feel satisfied with the answers that i gave covering most if not all aspects of my journey through transition and being a part of the LGBTQ+ community.