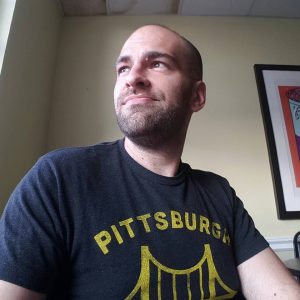 County of Residence:  Allegheny, Grew up for the most part in and around Burlington, Vermont. I moved to North Carolina for undergrad and called Durham, Raleigh, and Chapel Hill home for 8 years before moving to Pittsburgh in 2013.

How do you describe your identity? I’m a white, cisgender, gay Duke fan. Go, Blue Devils!

Please describe your coming out experience. Where did you find support? What challenges did you face?  The summer before my senior year at Duke, I thought a lot about how I was happy with almost every aspect of my life, but that there was one big thing missing. I kept myself so busy with school and extracurricular activities so that I wouldn’t have to think about my dating life. When I discussed this with a friend, he mentioned a Fall Break retreat that he had been on multiple times where students discuss race, gender, and sexuality. Thinking of this as a potential safe space, I signed up. It was there that I was able to break out of my shell and admit to myself that I was gay. Then I proceeded to admit it to the 30 or so people at the retreat! Most important for me, though, was that two weeks after that I was able to tell my parents and my sisters in person. I place a high value on family, and I feel so fortunate that I was able to have that conversation and receive love and acceptance in return. The challenge for me has always been if and when I need to come out to people.

How would you describe yourself NOW in terms of “being out”? Now I run an LGBTQ sports organization, so I think I’m pretty “out”! I am so grateful for the support that I have received from both the LGBTQ community and Allies that I have met over the years, and that is really what keeps me focused on giving back.

Tell me about the first LGBTQ person whom you met. What impact did they have on your life? The first LGBTQ person I remember meeting was a good friend of mine in high school. We did summer theater productions together in a town an hour away from our own, and we would carpool to get there. We talked about a lot of stuff on those car rides. He came out during one of those summers and we had a lot of conversations about sexuality. He gave me the courage to start some self-reflection, and even though I didn’t really come out until the end of college, I think he played a big part in helping me out with that process.

Past or present, favorite LGBTQ character or creator in television, film or literature? Please tell us why. I love the Netflix series The Unbreakable Kimmy Schmidt, and Titus Andromedon is a big reason why. He’s hilarious, his self-confidence is through the roof, and I would love to grab a drink and sing show tunes with him.

How do you stay informed about LGBTQ issues? Blogs for the most part. I still miss Google Reader. I have found that Facebook is a really important resource, both for the blogs that I follow on there, but also for the news stories that my friends share.

Describe your geographical community. I live in Westwood, which is a more residential area in the West End. People largely keep to themselves up that way, and I have never felt unwelcome.

Describe your local or regional LGBTQ community. I think that the LGBTQ community in Pittsburgh is fragmented. It’s not anyone’s fault, it’s just what happens when you have LGBTQ-friendly locations in various parts of a spread-out city. At the same time, I don’t know of many LGBTQ-affiliated hangout places that aren’t bars. That’s one reason why I love the LGBTQ sports leagues so much. They are a chance to be active and meet new people. I am making my way around to try all of the sports. So far I’ve done kickball, dodgeball, volleyball, sand volleyball, bocce, and bowling. Still have to get to flag football and softball, as well as try out running with the frontrunners!

Tell us about your access to health care in Western PA. Has it been LGBTQ competent (or not?) I am fortunate enough to be insured through my employer, and when I went to find a primary care physician, I got some recommendations from queer friends. My PCP is knowledgeable and non-judgmental.

Are there issues impacting your LGBTQ neighbors that aren’t visible or part of the local dialogue? Acceptance. Not just from society in general, but from our friends and family. Approximately 40% of homeless youth are LGBTQ, and even the youth whose families accept, or at least tolerate, them may face issues with bullying or violence. How can we tell the younger generations that things will get better in the future when they aren’t sure that the future even exists?

What would you like to see elected officials do to improve life for LGBTQ Pennsylvanians? Safeguard all Pennsylvanians from employment discrimination based on sexual orientation and gender identity.

Please share a lived experience, anecdote or fact about life as an LGBTQ person in your community. I think it is very easy to sit around, throw your hands up in the air, and say that everything is the worst and will never get better. We need to challenge ourselves to not only say, “It gets better,” but also to be the ones to make it better. I was terrified when I started Stonewall Kickball in Pittsburgh; I had no idea how many people would actually want to play, and although I had plenty of experience playing the game, I had never run a league before and can’t say I was fully prepared to take on the level of responsibility it entailed, especially as a volunteer. But after discussing the league with people in Washington D.C. (where the league began), and seeing how much fun all of my friends back in Raleigh were having with the league there, I knew that I had to trust my gut and go for it. I am so glad I did!

Beyond discrimination, what other barriers create challenges for your LGBTQ neighbors? I think social isolation is a big concern for the LGBTQ community.

What LGBTQ friendly resources are available for your neighbors? The Persad Center is great. There’s also the GLCC, and for those who want to get a little active, come try out one of the amazing LGBTQ sports groups in our city (Stonewall Sports – Pittsburgh [kickball, dodgeball, bowling, sand volleyball, bocce], Steel City Softball, Steel City Volleyball, PFFLAG flag football, the Frontrunners)!

What is your greatest fear for the LGBTQ community in Western Pennsylvania? I fear that our community will continue to fragment because things don’t seem to be going our way, and that similarly those in positions of power will ignore the requests of the community. I don’t think every organization has the capacity to serve the entire LGBTQ community, and there is great strength in being able to identify

What is your greatest hope for the LGBTQ community in Western Pennsylvania? My hope is that we as community organizers and members can work together to create a visible and welcoming community. A community that supports one another and that promotes acceptance.


What can allies do to support your LGBTQ community? Listen.

How can gay men and lesbians support the bisexual, transgender and queer members of our community?  Listen!

What motivated you to take part in this project? I think it is important to increase the visibility of our community and show how strong we are. I am honored by the opportunity to share my stories and experiences.

Finally, what question should I have asked? Please also share your answer. I could talk a little about my work experience as well! I work with the HIV Prevention and Care Project at the University of Pittsburgh on a number of projects including a safe space downtown for LGBTQ youth of color (Project Silk) and a social marketing campaign promoting love and acceptance of LGBTQ individuals (Acceptance Journeys). I am also in school part time to get a PhD in public health at Pitt, with an interests in LGBT health, intimate partner violence, and program evaluation.