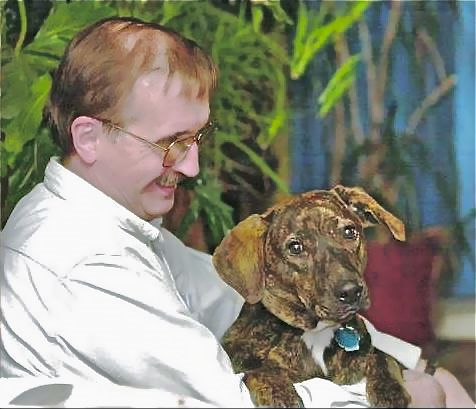 Editor’s Note: This post contains content about adults sexually abusing children. While we completely disagree with framing such contact as consensual, we recognize that this is a lived experience for many of our contributors. Survivors make their own survival choices; I condemn the adults involved, not the children. We have included information on where to turn for support. Full disclosure – I am also a survivor of childhood sexual abuse  ~ Sue

How do you describe your identity? Hardest and easiest question of all. I am a guy who gives a shit about kids, who adopts shelter dogs, who volunteers as a regional history tour guide, who loves cooking and gardening, who cares for his 92-year-old mother, who thinks he’s the most fortunate guy on the face of the earth. The fact that I’m gay is just part of the many things I am. And I find that almost nobody cares — and those that do

Please describe your coming out experience. Where did you find support? What challenges did you face? I was pretty openly interested in other guys when I was a kid. Then in high school I realized that that wasn’t something I wanted to be very open about. I think of those years as my “chameleon years.” I entered the seminary after high school, hoping that religious devotion would eliminate my attraction to these sinful desires/behaviors. It didn’t. And in fact, I discovered that others were there for the same reason. I quit the seminary. It was Vietnam War time, and the draft was still in existence, so I enlisted in the Navy rather than take my chances with where the draft would put me. After about 18 months in the Navy, I decided that I’m either gay or not. I explored gay venues in the DC area (I was stationed at Bethesda Naval Hospital at the time), and realized that I AM gay, like it or not. I sought out religious and psychological counseling, neither of which changed me (of course). But in the process, the Navy found out and I was promptly scheduled for discharge. This was prior to DADT, so the regulations were far harsher. To my astonishment, however, the officers who had supervised me were on my side. One in particular was given the opportunity at my discharge hearing to disavow his excellent evaluations of me. He refused — not so much, I think, in my defense as a gay guy, but because his honor was being challenged. “Of COURSE I meant them. I SIGNED them, didn’t I?” But of course, defending his honor meant defending me, too — that I was an excellent sailor, and being gay was irrelevant. As I said, I was astonished. THEN, the Pentagon refused to accept the board’s recommendation of a General under Honorable Conditions discharge. It refused twice, and the Board refused to back down. The Pentagon wanted Dishonorable. I got General/Honorable — which was upgraded to Honorable under President Carter. And that was a turning point in my life. It started out with realizing that if military officers value competence over sexuality, then why shouldn’t I? It took several more years, through college and grad school, to unlearn all the things I’d internalized about what and who I am, but 1968 was the turning point.

How would you describe yourself NOW in terms of “being out”? I am a retired high school teacher. Even when I was working, I was quietly “out.” I didn’t advertise, but I also didn’t deny if asked. In my second year of teaching, I was called to the principal’s office. He said “There’s a rumor that you’re gay.” I waited for him to continue, but he didn’t. Finally, he said “Well….????” I said, “Well, what?” “What are you going to do about it?” And then I heard myself saying “If you want to call an assembly, I can address that.” He humphed and told me I could go. I never heard anything else about it. And that was the starting point of how I have dealt ever since. Now, when I occasionally speak with teachers or student groups, I emphasize the fact that COMING out is mostly for YOU, but BEING out, being yourself, is for everyone else, especially for those who come after you. I emphasize that the fact that people came out and WERE out, is key to the fact that the majority of people came to see us as neighbors and friends and coworkers as opposed to child molesters and perverts. So BE.

Tell me about the first LGBTQ person whom you met. What impact did they have on your life? My first sexual experience aside from masturbation was with the choir director/organist at our parish – George. I was 11 years old, an altar boy, not a choir member (can’t carry a tune in a bucket, as they say), and I was also trusted by the pastor to set up for Mass, ring the Angelus, lock up the church at dark, etc. So I was frequently there. The parish elementary school was beside the church. I was in 5th grade. I don’t remember how the sexual things started with George, but I do remember that as a pretty independent, adventuresome kid, it seemed like a great new adventure. I did NOT feel abused or manipulated or coerced. I actually sought out occasions when I hoped George and I could “play.” Three years later, he was fired. That happened within hours of my gaining trust in the assistant pastor of the parish, and talked openly for the first time. I didn’t feel anything when George was gone — neither relief nor sadness. I was just surprised it happened so quickly. I talked with the assistant pastor on a Saturday, and George didn’t appear to play the organ at Mass the next day. In some respects, I think of that phase of my life as I think of the weather.

Editor’s Note: We do not condone or agree with the description of an adult having sexual contact with an 11 year old child as consensual in any circumstance. We strongly condemn such actions by any adult and urge children or adult survivors to reach out for support. The National Sexual Assault Hotline is 800-656-HOPE.


How do you stay informed about LGBTQ issues? Internet, mostly.

Describe your geographical community.  Small town. For the most part, people don’t seem to care one way or the other. But school bullying is still a problem.

Describe your local or regional LGBTQ community. I am just me, which includes being gay. Everyone who knows me knows that, I suppose.

I was a delegate candidate pledged to Obama in 2008, and one of the reasons was the fact that I’m gay. I talk with state legislators about a variety of gay-related issues, and they know where I’m coming from.

I work with schools and private industry on diversity and bullying issues and I make clear what I think. I was addressing a group of teachers and school administrators in Westmoreland County and a school administrator reacted to a statement by a teacher that a boy was being bullied. The administrator said, and I quote: “If he didn’t act so gay, none of that would happen.” Fortunately, he got roundly booed, so I didn’t have to say much beyond “One of the problems is that we validate the bullies by blaming the victims.”

Have you ever experienced discrimination based on your identity? Specifically, in a job setting, when applying for housing or while in public. I’ve been fired twice as a teacher because of being gay. Both of those instances were in the Middle East — Turkey and Yemen. On the other hand, I’ve actually found that being gay is an advantage. I applied to be a Court-Appointed Special Advocate for kids in the “system,” and made it clear that I’m gay. I was welcomed in that capacity, and various juvenile court judges made it clear that I was valued.

Are there issues impacting your LGBTQ neighbors that aren’t visible or part of the local dialogue? This makes me think of the Biblical argument about “who is my neighbor?” And that argument usually comes from those who seek to narrow the definition to people they like/agree with. But my response here is speculative, not based on knowledge of specifics. We have a huge heroin issue. The youngest son of a friend of mine just died from an overdose. That caused me to think again about why kids would go for addictive drugs, and while I know that sometimes it’s residual from pain killers administered as a result of injury, I can’t help but think that it’s “escape.” Escape from internalizing the things society says make you “unacceptable.” I don’t care what the reason is, sexuality or not. I just care that we have so many kids succumbing to escapism.

What would you like to see elected officials do to improve life for LGBTQ Pennsylvanians? A broad-scale anti-discrimination law dealing with housing, employment, adoption, etc.

Please share a lived experience, anecdote or fact about life as an LGBTQ person in your community. I honestly can’t think of a specific experience here. I am quietly out, and entirely accepted wherever I go. Everyone I know either knows I’m gay or seems unconcerned one way or the other. I have long since divorced myself from religious affiliation. Because I’ve lived in Germany, Turkey, Yemen, Brazil and New York City, I’m a bit different from most of my neighbors. But for the most part, I’m just the old guy over there in the blue house. I honestly don’t see much of anything connected to my being gay.

Beyond discrimination, what other barriers create challenges for your LGBTQ neighbors? Black friends have a more difficult experience, it seems to me.

What LGBTQ friendly resources are available for your neighbors? The local police are largely gay-friendly. The “school resource” officer at the high school tweets stuff from the Trevor Project.

What is your greatest fear for the LGBTQ community in Western Pennsylvania? School districts “talk” a good line about bullying, but do diddly shit.

What is your greatest hope for the LGBTQ community in Western Pennsylvania? The fact that WE are out, and we are seen as neighbors, friends, family members, co-workers.

What can allies do to support your LGBTQ community? Shut down the bigots

How can gay men and lesbians support the bisexual, transgender and queer members of our community? BE YOU

What motivated you to take part in this project? History matters.

Editor’s Note: If as a kid, you were sexually abused by an adult, we do not believe this is a sexual experience – it is abuse by the adult. We strongly condemn such actions by any adult and urge children or adult survivors to reach out for support. The National Sexual Assault Hotline is 800-656-HOPE.