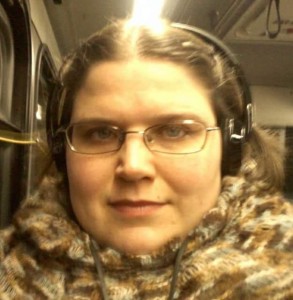 How do you describe your identity? I’m American. And I’m Irish. I’m an Irish Catholic (quite the distinction from an Italian, Hispanic, or Spanish Catholic).

I’m a girl who likes other girls and who likes guys and many trans variations.

I am a lover of beauty and a dreamer.

I weep at the drop of a hat but I am not weak.

Please describe your coming out experience. Where did you find support? What challenges did you face?  My mom didn’t believe me when I brought it up in high school but it was more just a brush off of the idea than any prejudice. As far as she knew, I had never shown any signs of liking girls.

College was another matter. She had a mini panic but my brother apparently quieted her with a “And you didn’t expect this?” My father’s reaction to my admitting my best friend was actually my girlfriend was “I kind of suspected that.” and then we got to talk about girls all the time.

I’ve never told my grandmother, and I expect I never will. We never talk much, anyway.

How would you describe yourself NOW in terms of “being out”?  I don’t blast it everywhere, but I don’t hide when I find someone interesting or attractive. I talk about girls and guys with EVERYONE. I get very few weird looks.

Tell me about the first LGBTQ person whom you met. What impact did they have on your life?  A girl about a year younger than me when I was in 5th grade. We were both figuring out who we were and we both were open about like girls too.

Past or present, favorite LGBTQ character or creator in television, film or literature? Please tell us why. Kitten from “Breakfast on Pluto” because for all the outlandish daydreams, Kitten is still real and still in a terrible place and like me, just trying to get through when the world is crumbling down.


How do you stay informed about LGBTQ issues? Friends, Facebook, the news.

Describe your geographical community.  West Virginia would have eaten me alive. I do actually wonder about that girl, my neighbor, and what ever happened to her, if she found what she was looking for.


My friends out in the mountains here in PA, I know they have a difficult time.

Describe your local or regional LGBTQ community. Pittsburgh is a wonderful place. I don’t know what its like for the younger generation; I’m a transplant. But as an adult, there is just so many resources and so many people. I’ve found for the most part, people don’t care. They just don’t. Its nice.

Have you ever experienced discrimination based on your identity? Specifically, in a job setting, when applying for housing or while in public. No, none that I’ve noticed.

Are there issues impacting your LGBTQ neighbors that aren’t visible or part of the local dialogue? The still present and hindering unnacknowledgement of trans people. People act like it’s not there or that it doesn’t exist. Colleges try to stifle identity instead of letting it grow.

What would you like to see elected officials do to improve life for LGBTQ Pennsylvanians? Make discrimination based on all sexual orientation and sexual identity ILLEGAL. Cause, it’s still not. I’m talking jobs and schools and daycares and EVERYTHING.

Please share a lived experience, anecdote or fact about life as an LGBTQ person in your community. I don’t really have one that stands out.

Beyond discrimination, what other barriers create challenges for your LGBTQ neighbors? Social appearance norms. For trans people especially, but even for people who simply cut their hair into a ‘butch’ haircut and have a stocky look.

Society expects people to LOOK certain ways and when they don’t, its not even discrimination against lgbtq all the time, its a dislike of the style a person exhibits. Like those old Microsoft vs Mac commercial. Suits vs comfort, or prep vs geek. Many people in the lgbtq community don’t fit in because they don’t dress the part for what they are trying to get. I have actually seen people going to interviews in an office atmosphere dressed in goth and hello kitty gear and then they wonder why they didn’t get the job.

Yes, what a person can do matters more than what they look like or how they dress. But I think, a person can be a little less rigid with “This is how I want to dress, take it or leave it.” because chances are, there’s going to be a lot more leaving it.

And this hardcore take me or leave me attitude is HUGE in the lgbtq community because they have to fight for such huge things but its also a detriment.

We are meant to live in this world. We can change this world, but at the same time, there are cultural and social ideals that exist. Push the envelope where it matters.

What LGBTQ friendly resources are available for your neighbors? There’s the community center and PERSAD. Several bars FILLED with people to lend an ear or give advice.

What is your greatest fear for the LGBTQ community in Western Pennsylvania? A Republican in office.

What is your greatest hope for the LGBTQ community in Western Pennsylvania?  I dunno

What can allies do to support your LGBTQ community? Vote. Always vote. And petition. It’s vital.

How can gay men and lesbians support the bisexual, transgender and queer members of our community? Yet again, VOTE and petition. And stand up for each other.

What motivated you to take part in this project?  My friends.

Finally, what question should I have asked? Please also share your answer. Am I happy?