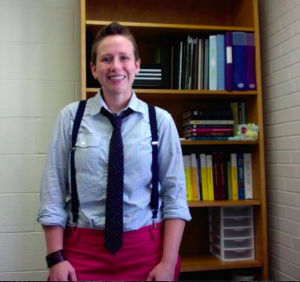 Preferred Pronouns: She, her

How do you describe your identity? I am female, and I feel feminine on the inside. I identify as lesbian, gay, or queer.

My outward presentation is much more masculine. I do not feel comfortable in female clothing and prefer to wear men’s clothing. I often wear a tie or bowtie, and I enjoy a suit jacket as well.

Please describe your coming out experience. Where did you find support? What challenges did you face? In middle school and high school, I didn’t really have feelings for boys, but when the rumors started that I was gay I soon got a boyfriend. He was truly my best friend, and we had really great times together. Throughout that relationship, we were really just friends. I didn’t know what the “spark” I was looking for felt like.

Years later, we broke up. It was at this time that I realized that I was attracted to women. It would take several more years before I would act on this attraction. After I had my first relationship with a woman, I decided it was time to tell my family. I am so scared, petrified actually. However, it was very anticlimactic. Being an academic, I told them in the form of a VERY detailed letter, complete with citations. My family loved and accepted me as soon as I came out.

Initially, I found a lot of support in my friends. I also attended PFLAG in Pittsburgh, and it was really helpful for me to attend these meetings.

How would you describe yourself NOW in terms of “being out”? I am extremely out. As a college professor, I find it is important to be a strong and proud role model for students. I also work hard to bring education and activism to the campus through programming and working with the campus community.

It is amazing how many students are uncomfortable in my class in the beginning of the semester. Often on the first day of class, I hear giggling and the occasional whisper of “dyke” or “gay”. However, by teaching with enthusiasm and passion, students usually enjoy the class and feel comfortable in a week or two. Each semester, I have students who come to my office to ask me about my coming out story or to interview me for a writing project in another class. I enjoy being able to show students that LGBTQ people are just “normal”, everyday people.

Tell me about the first LGBTQ person whom you met. What impact did they have on your life? The first LGBTQ person I met was my high school gym teacher. I grew up in a small town in Butler County, and there were no students at my school who were openly out. When I was in high school, we got a new gym teacher at our school, and the rumors soon surfaced that she was a lesbian. I always remember the big smile she had and how she was always full of so much positive energy. Years later, I actually wrote her an email to thank her for being such a positive influence and role model.

Past or present, favorite LGBTQ character or creator in television, film or literature? Please tell us why. Ellen Degeneres. She is so positive and full of love. It is amazing to look back at the route she has paved for acceptance through her public declaration of her sexuality and her ability to change people’s viewpoints through her kindness and sincerity.


How do you stay informed about LGBTQ issues? I try to keep up to date with LGBTQ issues through reading the news daily, both in the newspaper as well as online. I try to stay up to date on the appropriate terminology and verbiage, especially with regards to the transgender community.

Describe your geographical community.  Indiana County is a rural community. Living in the borough, we are more populated than the surrounding areas. Indiana borough is interesting in the fact that a large percentage of the population is IUP college students. For this reason, there is a lot of youth and open-mindedness that other small towns often lack. Overall, Indiana is LGBTQ friendly. There is still work and progress to be had on this front, but I am glad to be a part of this friendly community.

Describe your local or regional LGBTQ community. Indiana County lacks a lot of the LGBTQ community features that Pittsburgh has. There are groups, such as the Indiana Cares Campaign (ICC) and the on-campus group IUP Pride Alliance that serve the LGBTQ community. However, there lacks cohesion and collaboration throughout these groups. In spite of this lack of collaboration, many good things are happening here. There is an annual LGBTQ dance, an annual LGBTQ film festival, and several other coordinated LGBTQ events throughout the year.

Have you ever experienced discrimination based on your identity? Specifically, in a job setting, when applying for housing or while in public. I, unfortunately, have faced discrimination based on my identity at a former place of employment. Before working at IUP, I worked at another university in Pennsylvania. At this university, I was constantly harassed by a colleague in my department. He would often follow me to class and make comments. One of his favorites was “I should just call you Pinocchio, because you just want to be a real boy”. It was hurtful and demeaning. When I spoke the chairperson of the department, I was told that it was not a big deal and that I needed to get over it. Eventually I went to higher up individuals at the university, but the issue was never resolved. I am definitely happier at IUP, and I haven’t faced any discrimination from colleagues here.

Are there issues impacting your LGBTQ neighbors that aren’t visible or part of the local dialogue? I think this is a larger issue in Pennsylvania. There are issues facing all LGBTQ Pennsylvania residents, through safety in housing and employment. It was such a huge step for Pennsylvania to pass marriage equality (followed by the federal passing of marriage equality). However, we are still lacking rights and protections that our heterosexual, cisgendered neighbors enjoy.

What would you like to see elected officials do to improve life for LGBTQ Pennsylvanians? I would like to see officials pass the protections discussed previously. LGBTQ Pennsylvanians need to feel safe in their housing as well as in their employment. I think these are two fundamental issues that need to be resolved and corrected in the near future.

Please share a lived experience, anecdote or fact about life as an LGBTQ person in your community. Even when people make anti-LGBTQ comments or actions, respond with love. In the end, it will have a more positive effect on changing people’s viewpoints on LGBTQ individuals than by reacting in a negative or angry manner.

Beyond discrimination, what other barriers create challenges for your LGBTQ neighbors? For me, personally, the challenge is in meeting other LGBTQ individuals. It can be very hard to feel isolated in a rural community when you are single. I dearly love my heterosexual friends, but in the end I would like to feel more hope that my future wife will find me.

What is your greatest hope for the LGBTQ community in Western Pennsylvania? I hope that LGBTQ rights will keep expanding. I hope that LGBTQ individuals along with the allies in the community will continue to educate and push for full equality in rights and privileges.

What can allies do to support your LGBTQ community? Educate the community and stand up for your LGBTQ neighbors

How can gay men and lesbians support the bisexual, transgender and queer members of our community? Educate yourselves about issues in the BTQ communities and be supportive to the issues that effect them

What motivated you to take part in this project? I wanted to share my story, as an educated lesbian in a rural Pennsylvanian community.

Finally, what question should I have asked? Please also share your answer. I don’t have an answer here. I guess I am just too tired tonight 🙂