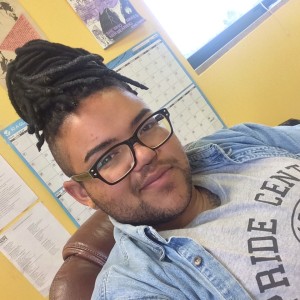 Preferred Pronouns:  They or He

I recently heard the word “genderflux” and I really love it. The idea is that my gender, and by extension my presentation, is sometimes a really, really loud version of itself and sometimes it’s quiet, but it’s always there.

Please describe your coming out experience. Where did you find support? What challenges did you face? My mom was gay, and people expect that it meant that coming out as queer was easy, but it wasn’t — I was still really scared. By the time I came out at 13, I had internalized a lot of messages about gay people, based on the things that people told me about my own mother and the other gay folk in my community. I cried when I told her that I was interested in another woman, but what’s important is that I cried to her. I was never afraid to tell *her*, I was just afraid to tell. It’s an important difference.

I didn’t really get to come out to my family — she told a lot of them, which took it away from me and was compounded when a lot of them said they assumed I would be gay because my mother was. I didn’t have any agency, and it was not cathartic at all, especially because that assumption is based on a weird, gross stereotype.

How would you describe yourself NOW in terms of “being out”? I essentially make my living being publicly queer. I’ve been working for queer and trans organizations since I was in high school, and on the occasion that I worked at an organization that wasn’t an identity-based group, I have always been very visible in my queerness and the programming I do for queer youth.

Again, it’s a poorly founded assumption, but people assume I’m queer the minute they hear what I do for a living.

Tell me about the first LGBTQ person whom you met. What impact did they have on your life? My mother was a lesbian, so I grew up in a household with mostly lesbian women — my mother, her partner, and all of their friends. It has been a part of my life since birth, and I think that’s the impact. I didn’t know that it was weird until the latter parts of elementary school. But! I *did* know that not everyone had two moms. It just never occurred to me to care about what sort of parents folks had.

Past or present, favorite LGBTQ character or creator in television, film or literature? Please tell us why. I don’t really have a “favorite”, but top five is definitely Queen Latifah as Cleo in Set It Off. She was the first time I encountered a Black woman destroying ideas of “proper” womanhood with no remorse and no compromise. I grew up not really thinking that Black Queers existed — hey, representation! — and she made me feel connected and powerful. On that note, I feel that way about her as Mama Morton in Chicago, too.


How do you stay informed about LGBTQ issues? By listening to what my community is saying, especially the folk who have to yell themselves hoarse before they are even recognized. Constant revision of my own work and thoughts combined with digging for new information and perspectives.

Describe your geographical community.  I have the privilege of being able to be incredibly choosy in most cases about where I go, so on that level my geographical community is pretty friendly. I spend most of my time between Pittsburgh and various parts of New York (the city and upstate).I would describe my personal communities in all of those places as generally pretty great, though the larger communities as still needing lots of work, especially when you ask them to move away from an isolated idea of queerness as just the LG and sometimes B, and start considering it in conjunction with things like race and gender.

Describe your local or regional LGBTQ community. The community I’ve found in Pittsburgh is broad and varied, but my most dear personal connections are to those people who are actively participating in 1. community work and 2. work that is uncompromisingly intersectional. I’m indescribably grateful to have the coworkers and phenomenal youth at Dreams of Hope, and I look up particularly to the folk at New Voices Pittsburgh as personal and professional models for my own life.

Have you ever experienced discrimination based on your identity? Specifically, in a job setting, when applying for housing or while in public. If you picked any single month of my life from the age of 13 until now, I could tell you about a discriminatory experience I’ve had — and again, they are not isolated based on my perceived queerness. One of the most notable ones here in Pittsburgh was a shopping experience at Kohl’s on McKnight Road. I was purchasing an expensive pair of running shoes and the cashier let the two white women ahead of me make all of their purchases on their bank cards without checking ID or questioning them at all. When it was my turn, she demanded my ID immediately, which of course outed me as trans, and then refused my sale despite the fact that the name and photo on my ID matched the name and photo on my bank card.

Are there issues impacting your LGBTQ neighbors that aren’t visible or part of the local dialogue? If you asked me to name an organization here whose focus was queerness and dis/ability, I wouldn’t have much to offer you. I can think of PERSAD for mental and emotional health services, which is huge, but I can’t think of any that are community organizations or focused on other needs. I’m certain that my own privilege plays a part in that, as my particular needs don’t generally affect my daily life, but I’m positive that it’s not just me.

What would you like to see elected officials do to improve life for LGBTQ Pennsylvanians? Consult members of the communities they purportedly represent. Understand and acknowledge that “elected” is not a neutral word, be transparent and honest about their implicit biases, and proactively seek out the information they know don’t have.

Please share a lived experience, anecdote or fact about life as an LGBTQ person in your community. In public people tend to waffle between reading me as ambiguously gendered and “really gay dude”, especially when I’m looking at “women’s” items. If I’m trying on things and I’m feeling worried, I tell them I’m costuming for a play or performance art. People are willing to explain away a lot of things in the name of weird art.

Beyond discrimination, what other barriers create challenges for your LGBTQ neighbors? A lot of the queer events I’ve attended and been invited to in Pittsburgh over the years have a serious focus on either alcohol as part of the night or bars as the location. If you’re under 21, or sober — or just sensitive to cigarette smoke! — tough cookies. I’d like to see more emphasis placed on intergenerational, sober events.

What LGBTQ friendly resources are available for your neighbors? In the interest of trying to offer something new, one of my favorite sex ed resources is sexetc.com — it’s run by teens, for teens. If you’re looking for answers to questions you maybe don’t want to ask in person or can’t get to a physical place for, that’s a really great place to start. There are also personal stories, blogs, and other resources. It’s not perfect, but you could do far worse.

What is your greatest fear for the LGBTQ community in Western Pennsylvania? That we will never move beyond the LG(B)(t)(q) and into the I’s and the A’s and all of the other identities that still get treated as mysteries and fads, and that it will never become standard for us to remember that you can be lots of those letters at once, in addition to all of your other social identifiers.

What is your greatest hope for the LGBTQ community in Western Pennsylvania? The young people — they need more credit and more space.

What can allies do to support your LGBTQ community? Collect your own, check people in private as well as in public, stand with us instead of for us.

How can gay men and lesbians support the bisexual, transgender and queer members of our community? Learning the names of Marsha P Johnson, Miss Major, and Sylvia Rivera, for starters — and then continuing to find more. By examining hetero- and homo-normativity and assimilation. Reminding themselves that people can be multiple things. Hopping to the proverbial “back of the line” without complaining. Remembering that you don’t know anything about a person except what they tell you. Ask yourselves if you’re leaving us out, and then actually listen to us when we try to tell you when you are.

What motivated you to take part in this project? Personal and public accountability and representation.

Finally, what question should I have asked? Please also share your answer. How do you practice self-care?

I feel guilty sometimes when I want to be done being publicly queer and trans for a little while, and I work hard to remind myself that it’s totally okay and reasonable to want to unplug from that. I really love to walk Allegheny Cemetery, and my absolute favorite activity of all time is going to the movie theatre, followed closely by hanging out with dogs.