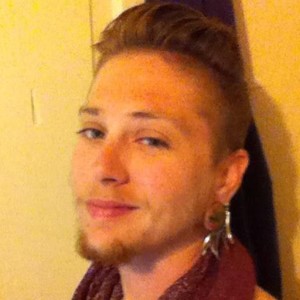 Tell me about the first LGBTQ person whom you met. What impact did they have on your life? The first lgbtq person I met was my first girlfriend in college. I never even knew what gay was before that. I didn’t even realize it was an option. After that I felt so much more in tune and aware of what I actually liked. I actually felt like I could express my sexuality instead of repressing it or not even really knowing what it was.

How do you describe your identity? I identify as transgender, non-binary, and queer.

How do you stay informed about LGBTQ issues? I attend some events in the community, have discussions with friends and house mates, and do some reading online of current events and happenings.

Past or present, favorite LGBTQ character in television, film or literature? This is not something I’ve ever really put much thought into before. The first thing that pops into my head is Laverne Cox. I see her speaking up a lot for the trans community and not only just the elite trans community. She speaks up for the disenfranchised portion of the community as well. Despite being in the privileged upper class she speaks out for the most oppressed in the community and takes action to help out and make a difference.

How would you describe yourself in terms of “being out”? I am as out as possible and in every sense of the word. I think its really important to be visible and to be a positive presence. I highly value my visibility as a trans and queer person and am constantly striving for ways to be more visible and to have a positive impact on people outside of the community. Being stealth has never been something that I’ve been interested in. At the same time I do not knock anyone who chooses to be stealth. I fully understand why some people need and/or want to do that. But for me its really important to be out as a queer person and as a trans person and to engage with the general public so that they can have a positive impression of something that they may not know anything about. This can dispel the very common fear of lgbtq people which can and often does lead to anger and violence towards the community. If I can be open and compassionate to people who lack understanding then I can change their mind by providing them with a positive experience of an lgbtq person.

Describe your geographical community. I was born and raised in Pittsburgh so I guess that would be urban.

Have you ever experienced discrimination based on your identity in a job setting? How about in terms of being served by a business? Please explain. I can’t recall anything specific within a job setting. I also can’t recall anything specific in terms of being served. The thing is that I don’t expect people to discriminate against me so I don’t see that happening. I also choose to focus on all of the positive experiences that I have with people outside of the community and I’ve had many more of those experiences.

Describe your community in terms of being LGBTQ friendly (or not.) The people that I surround myself with and choose to engage with are very accepting. I wouldn’t surround myself with people who weren’t. Even generally out in the world in Pittsburgh people are usually kind to me. I believe that is one hundred percent because of my attitude. If I expected people to be unfriendly to me then I would see that reflected in people treating me that way. But because I am comfortable and confident within, it is reflected without.

Are there issues impacting your LGBTQ neighbors that aren’t visible or part of the local dialogue? Yes. Any issues within the community are going to impact everyone in the community in one way or another. I think something that doesn’t get talked about or discussed enough is the intersection of being a poc and an lgbtq person.

What would you like to see elected officials do to improve life for LGBTQ Pennsylvanians? I have my own views on government but it’d be nice if they’d quit making bathrooms such a big deal and just let people pee!

Beyond discrimination, what other barriers create challenges for your LGBTQ neighbors? The number one major barrier that I see holding back the lgbtq and more specifically the trans community is victim mentality which is a product of being oppressed.

What LGBTQ friendly resources are available for your neighbors? There are plenty of lgbtq businesses in Pittsburgh. The glcc is a great resource for people. They provide youth services, counselling, provide people in need with toiletries and even have food for people quite often. It’s a great place for people to go and hang out and they even have various group happenings for people to attend as well. I’d really like the meditation group I recently began, [TRANS]scendance!, to become a resource for the people of the community as well as it becomes more well known.

What is your greatest fear for the LGBTQ community in Western Pennsylvania? I fear that people will continue to remain divided and on the defensive with each other because they have been so hurt in the past. All this hurt from oppression can easily pit people against eachother that really need to be working together. When oppressed people get stuck in victim mentality they lash out at everyone and everything. Even to people who are on their side.

What is your greatest hope for the LGBTQ community in Western Pennsylvania? I believe in the power of meditation to change peoples mindset. It’s not about some hippie dippie bs. It’s about sitting with yourself and getting to the root of it all. It’s about really looking inside and seeing where we are coming from. If we can face our pain and start to let it go we can create a space for something fresh and new. We can empower ourselves and instead of acting from a place of pain and causing more pain, we can act from a place of awareness and truth and cause more awareness.

What motivated you to take part in this project? Sue sent me a message and asked me to and I definitely have a message to spread and an investment in the well being of the community. I see so much potential with lgbtq people but it is being stifled by lots of pain. I’d like to see the healing process begin so that we can be a community of empowered and enlightened individuals. Those are the people that make the biggest difference in this world.