In recognition of Pittsburgh Black Pride’s 20th anniversary, we are highlighting the stories of their volunteers and board members. Sivynn responded when we put out a call for participants. His responses took my breath away. 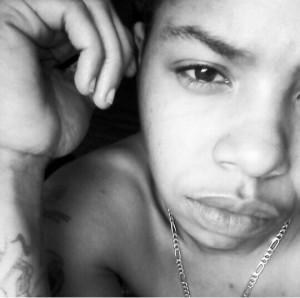 Tell me about the first LGBTQ person whom you met. What impact did they have on your life? I never knew anyone like me growing up, the closest thing to openly gay was my younger brother, but we didn’t know what “gay” was to identify him. He was a normal boy to me who just so happen to double dutch, do hair, and like things the girls like… I didn’t see a problem with it because everything I liked, just so happened to be labeled “boy.” I remember hearing “gay” every once in a while in reference to him, but it went in one ear and out the other, he is my brother, he is my love, and he makes me comfortable for who I am today… #Family

How do you describe your identity? I identify as male. I’m like a Ken doll (one day after I afford top surgery) lol. Ken is a man with no parts, but he is also a doll. Which makes him a sweetheart lol I AM THE KEN DOLL EXCLUSIVE!

How do you stay informed about LGBTQ issues? I don’t. If it’s on Facebook/News I see it, if not, then I only know what’s going on in my little world…

Past or present, favorite LGBTQ character in television, film or literature? My all time favorite LGBTQ movie/film is 1995s “Too Wong Fu: Thanks For Everything! Julie Newmar”

This was my first time ever seeing a “drag queen” and at 8 yrs old I was in LOVE with Patrick Swayze, Wesley Snipes, and Johnny Leguizamo’s characters Vida, Noxeema, and ChiChi. Seeing these men, even if it were just pretend, the movie was as real as life to me, acting out as being these “women” who just wanted to be themselves, they opened themselves to so much judgement, yet they did so much good, even if it was just in that small town. These women were just so BIG to me, not in size, but their hearts, and processing in life, not letting a few ill-mannered people or a little broken caddie hold them back…

How would you describe yourself in terms of “being out”?  Everyone knows I was considered (to the world) a lesbian. But within the past year I have been taking steps towards being Transgender, I say “hey I’m out, I’m doing this, look at me” but it goes in one ear and out the other… People may claim they don’t know about my transition, and me being out with it, some just don’t care to pay attention.

Tell me about your local or regional LGBTQ community. Diverse… With a lot of segregation.

What I love about Pittsburgh Black Pride, it may say “Black” but Black should mean unity. Everyone comes together, it’s about family, and fun. Positive energy, and love…

To live in an area that only has a few clubs, with nothing major standing out. PBP is the only event i come out for every summer because of all the segregation that is in the LGBTQ community that I see daily. “This is only for black lesbians, this is only for white gay males, this is for this, or that” but why can’t i go somewhere, ANYWHERE with a white lesbian friend, black trans friend, and a biracial heterosexual friend and not be left feeling uncomfortable? We are all supposed to stick together. There is equality to fight for, we as gays out number a lot, if only the “LGBTQ” knew how to love one another and stick together, stop hating each other, We’d have a stronger force… I hope after 20 yrs Pittsburgh Black Pride will be able to stand out more bold and more proud than ever before. They stand for everything I believe in. The believe in unity in the community.

Have you ever experienced discrimination based on your identity in a job setting? How about in terms of being served by a business? Please explain.  The job I have now, I work with the elderly. 99% of them are really good people. They are good to me and I try to be even better to them… But there is one man who does his best to try to tear me down every time I see him. He talks about my sexuality, how he feels that I am unworthy of ANYTHING and EVERYTHING, the belittling, I mean, it gets to me, and with my bosses not doing anything about it, it makes the job very sad and depressing….

Describe your community in terms of being LGBTQ friendly (or not.) Semi… It just depends of the person…

Are there issues impacting your LGBTQ neighbors that aren’t visible or part of the local dialogue? Trans… But I think it happens everywhere. If a trans was once considered something else its like you are now being shunned from “where you came from”

No… We are one acronym. We are ONE. As LGBTQ we need to stick together, whether white black purple or green, if we are a force then maybe just MAYBE more “straights” will create a better alliance between the two…

What would you like to see elected officials do to improve life for LGBTQ Pennsylvanians? I know they just passed the equality rights in Pennsylvania, but does that include getting health insurance for you partner/partners children through your jobs/company’s insurance? Can you jointly file for taxes now? There need to be more LGBTQ resources. And if there are plenty then there needs to be a better way for them to be seen and heard about. I feel like there are plenty of activists, there just needs to be more actions that actually things happen…

And I need the police to stop letting LBGTQ get their @$$ kicked by hatefulness. It’s not OK to get beat and humiliated for being who you are, and its even more hurtful to reach out for help, and doing things the legal way, just to be laughed at and nothing gets done… No one should have to live in fear.

Please share any anecdotes about life as a LGBTQ person in your community that might help outsiders better understand. It’s just “running, laughing playing… Until someone gets hurt.”

Beyond discrimination, what other barriers create challenges for your LGBTQ neighbors? I don’t know, its hard for me to get past the segregation that the LGBTQ creates for themselves from the hate of not knowing or understanding… Sometimes the LGBTQ can be worse then the “hetero” world…

What LGBTQ friendly resources are available for your neighbors? No sure. I know a few clubs though (smh lol)  The (black) LGBTQ community is big on partying, they forget to leave behind important information…

What is your greatest fear for the LGBTQ community in Western Pennsylvania? Being killed for being themselves… Or even worse, killing yourself to outrun the fear…

What is your greatest hope for the LGBTQ community in Western Pennsylvania? Unity.

What motivated you to take part in this project? Maybe something better will come of my thoughts…

Not many care to know what the LGBTQ thinks, and not many will even take the time out to read this… Im actually glad I did (even though half-way through I got bored and wondered WHY I’m even doing this, “nothing will come of it” but that’s the negative energy I am trying to avoid lol

Finally, what question should I have asked? Please also share your answer. Your questions are fine, new answers always opens up more questions… With enough “random” answers I am pretty sure you’ll have plenty more to ask soon lol

Please be sure to check out the Pittsburgh Black Pride events and turn out to support your community.

About the Delta Foundation and Pittsburgh Pridefest 2020