We selected this fish fry because of its proximity to our home on the Northside and the array of items on the menu as well as the hours. I was very pleased that the description on the Pittsburgh Fish Fry Map was detailed about the exact building in which to find the fish – this is helpful.

We wound our way up the hill and found plenty of street parking. We followed a group of people into the hall. First stop was the order table which was tucked into a nook. Fortunately we knew what we wanted because it was a little “tight” in the space. We ordered and I noticed that it did seem to fluster the woman when I said we were together. I don’t know if I just broke protocol or because we are two women? But then we were directed down the hall to pay and we received numbered paper plates on a stick with instructions to ‘wave it around’ when our number was called.

We made our way into a nice sized hall. Tables were laid out length wise with place settings. It took us a few minutes to find two empty seats (people do love to save seats in the Catholic Church don’t they?), but Ledcat managed and boy did it pay off. Beverages were included in the price – the selections were water in a pitcher, lemonade, iced tea and coffee. 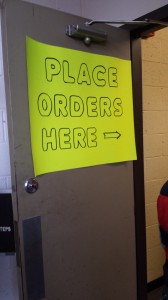 Our meals were ready in about ten minutes. Ledcat has baked sole which was served with a lemon garnish. Her sides were mac and cheese along with applesauce. A roll came along, too. I ordered the shrimp – 7 largish batter fried pieces. I opted for fries which I have to admit I’m beginning to get sick of eating and applesauce. The fish was tasty as were the shrimp. The mac and cheese was again a disappointment – it was more cheesy (sort of orangish) but just had no real amazing flavor. Fries were fine – warm and crisp. We ordered one side of potato pieorgie – these were terrific. Definitely the best item we’ve had so far. They were served with gobs of butter and carmelized onions. Dessert was included in the price as well – so we both had a cupcake although we could not finish the meal.

The total was exactly $20 for two dinners and a side of pierogie – right in line with the other fish fries especially with the complimentary beverages. The hall was nice and pretty easy to navigate. The portions were very generous. 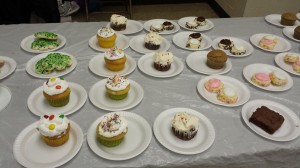 The absolute highlight of the evening was “Rose” – our 84 year old dining companion (not her real name.) Rose greeted us when we sat across from her and we had a lively discussion throughout the meal. Rose grew up along East Street in the 1930’s and 40’s. She moved to Ross to raise her family and now lives in Reserve Township (which I had never really heard of until that evening.) She belongs to the next parish over which shares priests with Most Holy Name.

She told us about her iPad lessons at the Bellevue Senior Center, her Corgi, her sister who was fond of apple pie. She talked about the churches and was very intrigued with our fish fry experiment – she grilled me quite a bit and kept insisting we need to try Assumption Parish in Bellevue (it is on our list.) She told us several stories about the history of Catholic churches on the Northside – St. Peter, St. Mary (now The Priory), the “ethnic churches” (her mother was Polish and fond of the Polish Catholic Church even though it was a different parish.) She regaled us with stories of the vibrant business community in that era – I had no idea the Buhl family owned a department store. Rose worked there and shared stories of how the “madames” from the “houses of ill-repute” down along Robinson Street would shop neck and neck with the creme de la creme of Pittsburgh society. She seemed most concerned that we believe that she was propositioned by the madames to take a job in their establishments – that required a delicate response, but what a great story.

The retired priest who lives in the nearby rectory came by (I forgot his name) and I loved that he was wearing a colorful cardigan sweater. He shook our hands and welcomed us – very nice.

Con’s: a bit hard to find a seat (perhaps have a volunteer help with guests?), mac and cheese not good

Trivia: Most Holy Name is 143 years old, founded before Troy Hill was part of the City of Pittsburgh. The parish is also home to St. Anthony’s Chapel which houses 5,000 Catholic relics. They offer tours during the day. We could not take one because they were having Mass when we were there.