Friday evening, Pittsburgh native Karen Mould known professionally as Bitch will perform one show only at Club Cafe, fronting her new concept BEACH. You can buy tickets for the 7 PM performance of her show (doors at 6) online.

When Opus One Productions first hinted that Bitch was bringing a new concept to Pittsburgh, I had no idea she was FROM Pittsburgh (her early childhood was spent in Monroeville.) Then I watched some of the videos from her latest album and saw all sorts of fragmented memories of my own Pgh childhood and the environmental concepts resonated. We are three years apart in age – a million miles in terms of our lives, but there’s a tie from those formative years I suppose.

Each time I listen to “In Us We Trust” I find some new component.  Check out the album here. 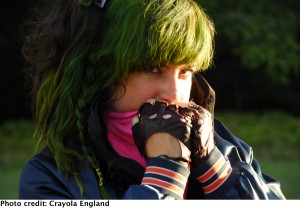 1. You lived in Monroeville for 11 years. What is your favorite memory of Pittsburgh (or Monroeville specific?)  Catching tadpoles in the creek. Building forts in the woods.

2. As an adult artist, what impresses you the most about Pittsburgh? The hills are so beautiful! How the Three Rivers meet is very special. The Andy Warhol museum!

3. I’ve noticed that quite a few media pieces about you, including Wikipedia, put your evolution as an artist in the context of your romantic relationships. Do you think this is particular to female artists or more specifically, queer female artists? Do you have any strong feelings about that? HMMM—great question! Yes–I’m sure it has a lot to do with being a woman. It’s like we can hardly mention a woman without either mentioning how she looks or who she dates. Thankfully, I am lucky to have some wonderful “exes” and am proud of what we made together!

4. Jill Sobule was here this summer, also at Club Cafe, and she sort of pioneered crowdfunded albums. That seems to be working for you. It must take a lot of work to make that happen, to create that intimacy with your fans and supporters. Is that a sustainable source of funding for one artist over an extended period of time? Crowdfunding is a LOT of work! And yes–I think it brought me closer to my fans. It’s a chance to really feel held and supported as an artist, and is also a great way to see who your fans are. As far as sustainable—I do think people will probably continue to release their albums that way. We are not riding around in fancy new cars or anything from it, just able to actually pay for the production, which is very expensive, and know that there are people out there who want to hear what you are making is very comforting.

5. Help me understand – I’m reading pieces that say you are performing as BEACH and other pieces saying you are Bitch performing a concept called BEACH with the album named In Us We Trust. Does it matter that I’m confused? Haha it matters to me that you are confused, yes! MY concept is not that i’m CHANGING my name to BEACH, but i’m releasing this new project/sound under the name BEACH, with the powerful, smart Bitch behind it all!!!

6. “Ibuprofen” really struck me, because I’m recuperating from a concussion so I had to turn it down and yet I am a big fan of the actual ibuproen. I also picked up on what I perceived to be a very throwback to the 80’s and 90’s feel to the video. Then I watched “In Us We Trust” and saw the little doll house that I had growing up in the 70s (born in 70 in West Mifflin). Then the Judy Blume reference. You are killing me. Is it wrong that I want that house again? It reminds me of this gritty conversation taking place in our neighborhoods about donating gently used toys to low income families -the conflict of “used goods” v “reuse as a respectful concept” I think the trust of intent is the real issue. Am I anywhere near what you intended? YES YOU ARE VERY NEAR. I hate how much we waste in our society. Part of the concept of BEACH will eventually be to use my talents to raise awareness about all the pollution in our oceans. I am a 70s kid, so Judy Blume was huge for me—and that Fischer Price doll house was something I found on the streets of Brooklyn and got super sentimental about and couldn’t NOT take it home!

7. Tell me about the very first LGBTQ person that you knew and how that impacted you? OOH—my Mom was/is very involved with musical theater, so I think there were always gay people around me, but not really talked about at ALL. I think the first person who i KNEW was gay was a woman in my Women’s Studies class in college. I never spoke to her. I was just very intrigued by her, and knew that the fact that I blushed any time she even LOOKED at me, there was something a little more going on there for me.

8. Past or present, favorite LGBTQ character in television, film or literature? PEPPERMINT PATTY!

9. What is one simple thing a reader can do to support the LGBTQ community? Go out to events! Come to hear Bitch! Be a positive influence in the entire community, and make your own opinions about people. Don’t listen to or spread gossip. There is a lot of in-fighting in the queer community, rumor-spreading, etc. Be smarter than that!

10. Do you have any Pittsburgh based influences? Local or Pgh natives you’d like to work with? None that I can think of.

Thanks for taking time to answer my questions and for coming to Pittsburgh!

Thank you for the insightful questions!!!

And here’s the video “In Us We Trust”  … hope to see you Friday night!