Ten years ago today, I went to the Gay & Lesbian Community Center of Pittsburgh for a new women’s discussion group. About a dozen women were there, none of whom I knew. One woman in particular seemed pretty intent on taking things in and (I hoped) thinking about them. We struck up a conversation about cats and the fact that we were recent home owners.

I was a bit smitten.

We met again a week later at a dinner event of that same group of women. I made a smart-ass comment about wanting to date a woman who had read a book without pictures and she without any guile whatsover said “I read books all of the time.”

I was more smitten.

The following week we met for a third time at the lesbian potluck at the GLCC.

You can probably guess the person I’m referencing – Ledcat. I’ll save the details of our first date for another time. Tonight as we enjoy the loveliness of the LGBTQ welcoming Rehoboth Beach, Delaware – I’m going to celebrate that wonderful meeting and how much its brought to my life.

We are vacationing with friends here in Delaware and its pretty exciting that people are going to be able to get married on Monday. Equally exciting are the trans inclusive laws recently passed. I’m happy to spend my money in such a state! 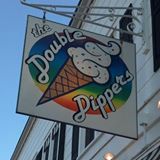 We actually had dinner at a British pub (???) but then found a fun little gift shop called “Gidget’s Gadgets” which was definitely gay owned (the ad for an upcoming leather fetish meeting tipped me off.) A few blocks later, we found “Double Dippers” – the rainbow flag tipped us off to its ownership. I outed us as lesbians to the ice cream scooper and soon we were awash in advice on what to see and where to go.  They serve Hershey’s Ice Cream so it was a nice throwback to our beloved Klavon’s Ice Cream.

We also really enjoyed being able to simply *be LGBTQ* – we could walk holding hands, use endearments and simply be ourselves. I hadn’ t realized how much energy I expend in Pittsburgh being cautious. Something to consider.

So happy anniversary of our meeting,  my dearest Ledcat. I’m glad we celebrated with an adventure – a fitting metaphor to this incredible journey of the past ten years. 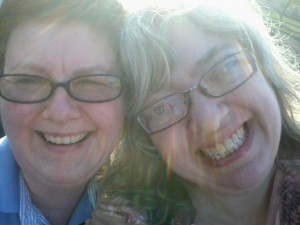 In honor of our tenth anniversary, we are asking for donations to the Gay and Lesbian Community Center of Pittsburgh. The actual gift is “tin or aluminum” – I can’t really think of a good tie-in for those metals (we certainly don’t need more cookware.)  The “modern” gift is diamond jewelry. Now that’s something neither of us would ever want.

If you are wondering, no we aren’t planning to get married here in Delaware. If the federal government extends relevant benefits to married couples in PA or the other 37 states that don’t recognize marriage, perhaps. But we are both very practical and getting married without being able to get divorced while perhaps not a romantic thought is simply too pragmatic for us to ignore.

So help us celebrate 10 years of unwedded bliss by supporting others in our community! Thank you.