And yet when Edna hit the stage no one in the audience booed. People cheered and laughed. A theatre full of people in Pittsburgh in an audience that contained kids did not seem to be offended by Edna in the slightest.

When I send Laura, Sarah, and Elijah off to review the arts, I never know where they end up with the written review. Everything is fair game from the parking and seating situation to the representation of the cast to the LGBTQ politics of the show. We are not professional reviewers, but our collective points of view about the arts hopefully encourage you to get yourself to a production soon. ~ Sue

Tuesday night was my first day back at work from a much needed vacation. Sue reminded me that Hairspray, the musical, was playing Tuesday night at the Benedum. I did not want to go. I was tired and thought it would be too much. However, Sarah P, my friend and musical companion, was looking forward to it. And, because I always have a good time with Sarah, I relented. Off to the Benedum we went.

Hairspray was written by John Waters and is set in 1962 Baltimore and centers on a plus size teen, Tracy Turnblad, who tries to racially integrate a popular teen dance show helmed by Corny Collins and run by Velma Von Tussel for the benefit of her popular, thin daughter, Amber Von Tussel, who becomes Tracy’s nemesis. Along the way we’re introduced to Tracy’s mother, Edna, her father, Wilbur, best friend Penny and a whole colorful cast of characters.

The musical is about following one’s dreams and also about offering biting social commentary on segregation and how utterly ridiculous it is…Tracy can’t understand why the black and white teenagers can’t dance together. Her quest to be a star and make that happen land her in various situations, but in the end she manages to accomplish both things.
The musical is an explosion of technicolor in both the sets and the outfits. The music is both joyous and inspiring, especially the songs “You Can’t Stop the Beat” and “I Know Where I’ve Been” sung by the character Motormouth Maybelle played fantastically by Sandie Lee.

Now, for the LGBT politics. John Waters had a drag queen named Divine play Edna Turnblad in the original 1988 movie. In the NBC live version in 2016, Harvey Fierstein played Edna. There is a tradition of having a man in drag play Edna. (In fact Dvine was in at least one other John Waters’ movie Pink Flamingos.) This is seemingly a political act as the right has now vilified drag queens portraying them as pedophiles and child groomers. As is the theme in Hairspray about segregation being ridiculous, this is both ridiculous and deeply offensive. And yet when Edna hit the stage no one in the audience booed. People cheered and laughed. A theatre full of people in Pittsburgh in an audience that contained kids did not seem to be offended by Edna in the slightest.

As it should be.

Hairspray is on stage in Pittsburgh through Sunday, January 8, 2022. There’s limited ticket availability at this point, so click soon. 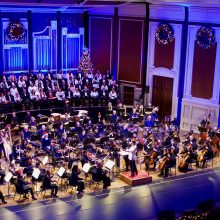