This year, Thanksgiving is an empty space.

Usually there is family. But several members of my extended family blame me for unrest and there is a very large gulf. So holidays are diced into rotating portions of time and energy.

Sometimes there is good food, my favorite meal of the year. But I am rarely consulted about menus so only by ordering “to-go” from my favorite place can I be assured of a satisfying meal. The meals shared with me are delicious, but that is due to no contribution from me. And thus I derive lesser satisfaction. People who are not always the +1 do not understand.

More recently, there has been outrage as I considered more deeply the impact of this “All-American holiday” on my Indigenous friends. When I had the energy, I zealously shared links, promoted content created by Indigenous creators, explored my own family history of colonizing Western Pennsylvania lands. But this year, it feels soul crushing. Especially in light of this weird new trend of writing “Happy Thanksgiving, however you celebrate.”

I found a document describing how my ancestors literally discovered a cleared field of corn in Butler County and just took it. It was a sign from God. Clearly someone had planted and maintained it and I highly doubt it was intended as a beacon to a bunch of grump Irish-German Catholics.

So is that how we celebrated then? This linguistic twist is absurd.

That makes sense if you are distinguishing between traditional meals, football tailgating, gathering with friends versus family, etc. But I suspect people say this to erroneously acknowledge that some people don’t celebrate Thanksgiving. Not because it isn’t their religion, but because it represents the violent traumatic destruction of their cultures. That’s not a neutral day. It isn’t even like people who don’t have celebrations built into acknowledging their holy days.

Now. I suspect the reason for this linguistic twist is to erase the anti-Thanksgiving sentiments as being “another way of looking at things” rather than the way things actually happened. It is sort of a #NotAllThanksivings mentality, but insidious given how many people have zero actual bond to the actual traditions of Thanksgiving. But don’t come for their turkey dinner or football game. That’s American.

The trend in 2022 for big retailers to remain closed on Thanksgiving so their employees can be with their families is also total bullshit. It is a ploy to take us back to say 2005 when Black Friday was still a one day event and almost nothing was open on actual Thanksgiving. That’s not exactly a big improvement.

When I was growing up in the 70’s and 80’s, most everything retail and consumer oriented was closed on Thanksgiving and sometimes on Friday. Industrial was open. My Dad worked many, many holidays.

I was okay with Thanksgiving becoming commercialized because that diluted the socio-political harm. Now I think the seeming uber-capitalist move to turn Black Friday into the holiday du jor didn’t so much backfire as feed a larger narrative. It is a drop in the bucket using sentimentality as a cudgel.

Giving workers a day off (paid or unpaid?) to be with their families is paternalistic as fuck. And it gives the company a little pivot point for their abusive labor behavior. Have some turkey, but don’t even think about leaving early because your child is sick or including your spouse on your health insurance.

We don’t need no union here – you get turkey day.

How is this ploy not transparent? Who in their right mind thinks these corporations have such reverence for family time? It isn’t even like a floating holiday so people can literally take off when needed to celebrate as they see fit, whatever they see fit.

So maybe I got a little Thanksgiving outrage going on, but barely enough to write this post.

This year’s holiday seems summed up by the fact that I had a lovely dinner with friends, came home to my adoring cats and safe home, then woke up shivering uncontrollably at 3 AM and then began vomiting. The only thing that stops chills for me is my weighted blanket and my robe. But at 3 AM with chills and vomiting, I was sure they both smelled like cat pee (I couldn’t smell) so I was quite torn about what to do. I woke up with both on the floor next to my bed as I dangled off the side like a rag doll.

Food poisoning? Virus? Who knows? Who cares? I canceled my ‘Friendsgiving’ plans for Friday night because I do not feel like facing food smells.

My good wife made me tea and picked up the groceries so I could sleep. She’s going to Friendsgiving which is a good thing. I’m going to search for some soup in the cabinet.

The one good thing from this is that I got so sick, I seemed to have shaken off the depression. Maybe.

So this will go down as a nice Thanksgiving, minus the sickness, and that’s about it. 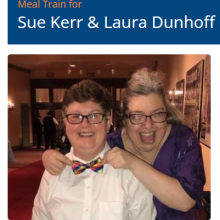 We’re on a Meal Train and We Love This Stuff