November is National Blog Post Month – the goal is to write a blog post each day of the month. This used to be a big thing with prompts, logos, incentives, etc. Now it is just a solitary pursuit.

Today is November 1, 2022. Known to many of us as All Saints Day (a Holy Day of Obligation)

It is also the Day of the Dead or Dia de Los Muertos. This tradition honors our beloved deceased.

And today is the birthday of my mother, who died this past February. She would have been 80 today. She was a devout Catholic and a very big believer in Purgatory, praying a lot for the poor souls.

Even though I grew up practically next to a cemetery and two churches, I didn’t do a lot of death stuff. Kids didn’t go to funerals in those days. And frankly, not a lot of people in my young world died. I do have a memory that’s factually inaccurate – it was the death of my uncle’s father, Mr. Keck. I remember my parents telling us and my “pondering” it in my heart. How was I supposed to feel? I was sorry for my uncle and for his mother, Mrs. Keck. But to me, Mr. Keck seemed very old and thus It didn’t feel devastating. But I asked if I could go to the funeral and was told no. And this is where it gets weird (aka trauma)

I have a distinct memory of walking to school at Lebanon Junior High where I was a 7th grader. I remember sitting on the wall waiting for the ball to ring. I can feel the chill of the wall seeping into my clothing and the cool of the slate against my face. I was still pondering. It is a very real and intense memory, one I’ve always attributed as the first time I thought about death impacting someone I knew, someone in my extended family.

In May 1979, I was in a different school altogether. I was in fourth grade at New England Elementary. There were no walls for sitting before the bell rang.

No one else died when I was in 7th grade that I know of – no uncles or grandparents or neighbors. While I’m sure I had my morose contemplative moments in 7th grade, why did I fuse it with the death of my uncle’s father three years earlier?

The only answer I have for now is the fact that my brain did make that adaptation for some reason, possibly to protect me or possibly just due to misfiring synapses. Fourth through eighth grades were among the roughest I experienced. We’ve tried targeting that memory with EMDR, but there’s just nothing there. So maybe as other memories become clear, it will shake itself out.

With my mother, it is different. I was sitting in bed reading next to my wife Laura who was talking on the phone with her mother. My brother texted me, I got the news, and asked Laura to hang up. Then I cried. It was a tough few days, but I had this absolutely sense of certainty that my mother was at peace – she was reunited with her parents and grandparents and two of her siblings and she was happy. That’s all she ever wanted in this life – to not be here.

That was sad for me to experience, but it was useful to process her death. She experienced terrible things in this world so I am truly glad for her to be free of that. I miss her, but my relief is greater than my sorrow.

I think I’m like my mother in that I’m more of an All Soul’s Day type than an All Saints Day. Everyone loves a saint. But it is the suffering, those on the fringes and margins, those who are denied entrance and need a helping hand. Purgatory isn’t a place, it is a condition of suffering usually at the hands of others.

That being said, I am confident that my mother’s suffering expunged her sins and she is peacefully in her heaven.

I don’t know about Mr. Keck because obviously I was 8 when he died and don’t even remember that correctly, but I’m willing to say a prayer for him tomorrow. Just in case. 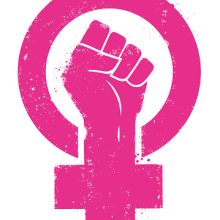 On Being a Woman