A few weeks ago, Pittsburgh LGBTQ Charities responded to concerns of a LGBTQ family being targeted by a neighbor. The specific focus at that time was targeting their 15-year-old Black trans daughter by hoisting a 9-foot transphobic sign in their backyard facing her bedroom window. Previous encounters included implicit threats to their then 17-year-old Black heterosexual son about calling the police for ‘recycling inappropriately’ with a reference to the murder of George Floyd and so much more.

One part of the response, crafted with the family and Ke’Juan specifically, was to send a message to the community – PLC partnered with Commonwealth Press to create yard signs reading Protect Trans Kids. We ordered 50 signs and distributed in the neighborhoods near the family so they would see them as they went about their daily business.

Response was great and has continued to grow. There are now requests for close to 300 signs total. Volunteers have been distributing, starting with Northside locations and moving outward. No one is charged, but donations offset the production costs. Each sign is about $12 or 50 signs for $580. These are NOT a fundraiser, but any excess funds left after the signs are done will go to other programming around Ke’Juan’s wishes. Right now, donations go to produce more signs. PLC invested the original $580. Donors have invested another $1630. as of today we need $1300 to meet the signs requested via our project. That’s not allowing for a single sign be distributed to other spaces or public thoroughfares, etc.

Individual donations are probably not going to keep up with demand for the yard signs. We need to think bigger and broader – who in the community *should* be investing in the message that trans kids need and deserve support? Political candidates? Community groups? Private business? Local governments? Civic groups? Foundations? Affluent neighbors?

So we are establishing a crowdfund at GoFundMe for this particular project and asking you to help with the heavy lifting of requesting donations, both individual and from groups. Share the links with your community groups, your book clubs, your faith community, your political committee, and your neighbor/relative who can write a check for $580 without breaking a sweat, something most of us cannot do. I know a very few folks like that and I’ve reached out to ask. Can you do the same thing?

The other side of that is determining where else an almost guerrilla effort to get 50 or more signs up in a specific geographic area will have impact. For example, perhaps in the districts near the primary sponsors of anti-trans legislation in the Pennsylvania General Assembly. Or school districts being sued by parents around teaching about gender identity. Or if there’s another kid somewhere (of course there is) who is being bullied and a particular neighbor is part of that behavior, maybe other neighbors on nearby streets need to be offered this resistance.

We received a request from two PFLAG chapters for a batch order of 50 signs total that their members will intentionally distribute throughout their communities, many of which are far from the Northside as the crow flies but not as the ignorance and bias flow. That’s what we need. We’ll produce the signs and work to raise the funds to do so. But we cannot take on distribution and they are handling that side of things. Are there other groups like PFLAG (but not necessarily LGBTQ centric) who would handle distribution in a set geographic area?

That’s going to require someone on the ground in those communities to handle distribution and an infusion of cash from specifically lesbians and gay men and allies to send these signs. For example, two PFLAG chapters teamed up to cover 50 signs they will distribute.

Can others do the same? Can you and some friends or colleagues or others who are gravely worried collectively chip in $580 – maybe $50 or $100 spread across multiple people, maybe a donation from the coffers of a committee, group, campaign fund, or business account?

We really need lesbians, gay men, and cishet allies to show up and send this literal sign that we resist efforts to erase and invalidate the lives of our trans neighbors, especially our youth. 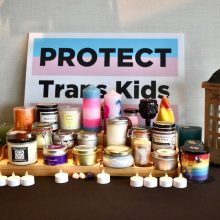 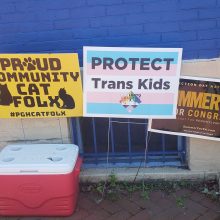