This is the sort of play that I would prefer to contemplate for a few days before I write a review. However, the importance and impact of this creation is so significant that I’m pushing through my own process to urge you – strongly – to Carnegie to see this show running for three weekends.

Hoard is a play on a stage crammed with stuff – papers and boxes and clothes and five feather dusters and so much more. But the play is not overtly about hoarding. Rather than dwell on the tropes and stereotypes, Brennan plumbs the depths of the reasons why people hoard, stretching far beyond the generalized ‘mental illness’ to actually tell stories. Real stories of how people react to trauma, stigma, and isolation. Stories of people who lean into their collections of stuff and stories of those who absence of things is also quite telling about their similar stories.

Viv gives veteran actor Virginia Wall Gruenert ample opportunity to demonstrate her humorous side with a character who deflects, charms, and uses whimsy to avoid coping with a harsh and unkind reality. She moves through the traumatic flashes as her story of survival and coping unfolds in the narrative. She’s the stereotype of someone with unresolved issues, but she’s also very much real in her raw truth as someone who has survived and figured out how to craft her own lifeline when old coping mechanisms dissolved.

Erika Cuenca as Claire at first feels like a character she’s inhabited before, a woman who likes order and control and boundaries. However, Brennan’s script takes Claire away from that typical narrative tension of uptight woman and instead unveils a wounded woman who finds herself responding to the person steamrolling over the boundaries, finds herself leaning into the tools Viv offers Claire, perhaps unknowingly.

This is not about Viv and Claire saving each other. It is about how they’ve saved themselves thus far using vastly different tools. Viv hides from the world at her home while Claire moves purposefully about Pittsburgh, including travel to Paris and other destinations. Viv hides from the world, but remains open to human connection while Claire practically vibrates with her insistence on helping people without connecting.

Wall Gruenert and Cuenca are onstage for 90 minutes without intermission. The third star of this show is the set itself – a living room in a Pittsburgh home built in 1899 that is part of Viv’s legacy from her past. The carefully crafted wall of stuff is mesmerizing in its precision, especially as Viv and Claire pull items seemingly at random from the piles. I don’t envy the set team that have to put everything back in place for the next performance. However, as Claire says “Someone has to clean this up.”

This production is part of a new collaboration with The Cell Theater in New York City. After wrapping the Pittsburgh run, the whole kit and caboodle will be packed into a truck and driven to NYC for its next iteration. off the WALL has previously collaborated with Cell Theater in the recent production by Natalia Zukerman (who returns in October with an updated version of her own show.)

This is not a neat or tidy play. It is brutal and raw with two actors whose chemistry has been well established circling around one another in an orchestrated emotional and psychological dance. Brennan’s script leans into our expectations of what a play about hoarding *should be* and deftly pivots to hold a mirror up to the audience about what hoarding *could be* – the early snickers and giggles from the audience about the hoarding tropes gave way to silence as the story unfolds.

If you want to see theater that explores mental illness with care, compassion, and cleverness, go to this show. Don’t wait.

I am a person who keeps my things close while my partner prefers more order and structure. After our post-play conversation, I think we took away different things from this show. I cant’ speak for her, but I felt validated and seen by this show. My stories are different than either characters, my collections of stuff are perhaps not so visible. This is the first time I’ve seen hoarding as more than a joke or stereotype or reason for pity and scorn.

It was almost an homage to those of us who find a way to survive a world that would prefer to keep us out of sight.

Hoard runs through March 21, 20120. Tickets range from $5-$30 (contact me for a mental health professional discount)

The theater is fully accessible and will accommodate guests who require aisle seats, companion seats with dignity. There is plenty of free parking and public transportation. You can even take your drink into the theater. 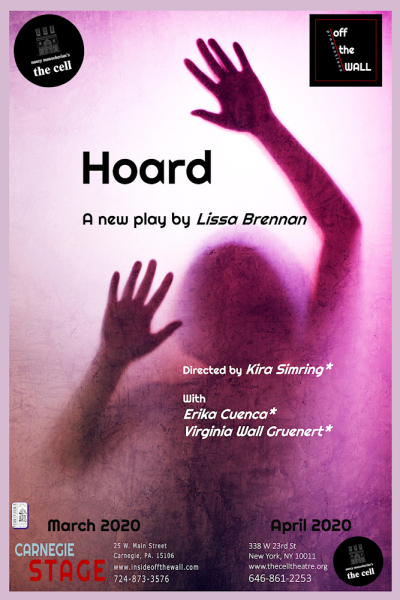