My lifelong friend, A, is a 49-year-old, white woman with a 16-year-old daughter. She grew up in Pittsburgh, earned a Bachelor’s degree in chemistry and graduated from the Temple University School of Podiatric Medicine. She worked until she was fully disabled in 2011 by chronic health problems. She had to turn in her medical license, but has never stopped educating herself about her own and general health issues.

Earlier this week, A was transported to the UPMC Presbyterian Hospital because of her symptoms. She agreed to share some of her experiences for others. Her narrative has been lightly edited.

It was a very surreal experience. I had been getting sicker since last Wednesday. My Dr said I needed to go; I am no longer to go to UPMC East. It’s just too much of a community hospital. And I am too medically complicated. They notified Presby. I was taken immediately into a negative pressure room in the ER.

The Dr came in wearing *what looked like* a hazmat suit. Ordered labs, said a nurse would be in & I was being admitted. Nurse came in, drew blood, gave me IV meds — also in PPE (personal protective equipment). Less than 2 hours from walking in, I was in the ICU. *I didn’t know that is where I was going until I saw the sign on the door. It scared the crap out of me.*

*I found out that* ALL suspected C19 patients go to ICU for continuous monitoring. In total isolation. *the room was modified to make it negative pressure. It was loud & cold. And I was completely alone. The call button worked, but the nurses couldn’t hear me & i couldn’t hear them.* To come in my room, (staff) must have on complete PPE.

I gave the nurses my cell phone # so we could talk before they came in. I thought this would make it easier to make sure they had everything they & I needed rather than waste PPE. *They would call & wave at me through the window so i knew it was them. They also said if i was scared or just wanted someone to talk to, that i could ring the call bell & they would call me. They were amazing, kind, caring & absolutely more worried about their patients than themselves. This was all new to them too.* Found out later I was only patient who did this. There were 7 other poss C19 there at the same time. The nurses were going to suggest that it be protocol because it made things sooo much easier.

I have medical PTSD, especially of ICU. But staff was wonderful & got my meds & helped me through it. The entire staff was amazing, saying how scared they were for their patients. Doing everything possible to make it easier for the patients.

Honestly, very surprised my test results were negative. Talked to healthcare friends that have treated C19 patients & my symptoms seemed dead on. Still afraid I will get it

My 16-year-old daughter was home, sick with same symptoms. Worried about me. I was worried about her.

I had a scary, but good experience. And the nurses repeatedly said that being able to call me was hugely helpful. It was also helpful for me. It made me feel less isolated.

The ICU room has a negative pressure vacuum in it & is loud. The door are sealed shut. You can’t hear anything from outside. It is extremely isolated. But, I could push the call button & they would call me on the phone. I also, gave the the ER doc my cell phone number. She was also surprised when I offered it.

A was discharged to her home the next day where she is recovering, but vigilant about any exposure. We join her other supporters in scouring stores for essential she and her daughter need and cannot obtain directly because of their health, including toilet paper. If you’d like to thank A for her good idea, you can do so via PayPal.

What caught my attention in her account is the issue of nursing staff in particular having to don PPE and then discard it with each visit to check on patients who are isolated. Using a cell phone seems like such a common sense idea to reduce waste and a potential strain on resources. But maybe it took someone who has experiences as both a patient and a doctor with multiple hospitalizations to see that connection?

Tablets can be sanitized and reused from patient to patient. Or patients can opt to use their own devices within their room. It is another tool that families can use to communicate with patients. Even hospital volunteers can use tablets to do their patient support roles

Pittsburgh is a city that prides itself on medical care and technology. We have Google, Facebook, Amazon hubs and more. We should be able to secure donations of tablets for all of our regional hospitals as well as collecting (and sanitizing) gently used tablets for nursing homes, shelters, etc to give people communication tools. 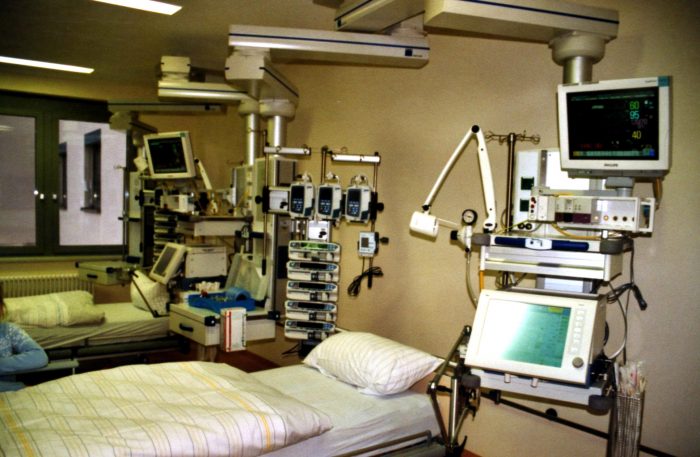