Welcome to Fish Fry Fridays, 2020 Edition! Click here to learn more about this project, now in its 7th year of providing you absolutely biased reviews of fish fries throughout Pittsburgh. 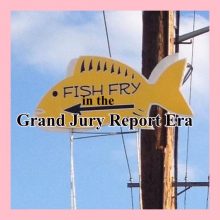 Random review of #fishburgh adventures during Lent. Find a fish fry on this map! You can also follow them on Facebook and find tons of reviews and suggestions.

After a 2019 hiatus, we are bringing back one of our most popular features – #FishFryFridays. I make no promise that we’ll go each week, but we’ll see what happens.

I do not want to go into a Catholic institution much less give them money, so we are going to go to try other venues and see what happens. Our choices are further constrained by Laura’s work schedule and traffic. She’s not using PTO to get a fish sandwich. We have our eyes on those deep fried grilled cheese sandwiches in Swissvale and the vegan Orthodox Lenten dinners in New Kensington (no link, et.) And as always, we’ll visit the Northside Elks Lodge on Good Friday. Feel free to make other suggestions, as long as they don’t include “I know you said no Catholic Churches, but.”

So to start, we picked an old standby – a Presbyterian Church in our neighborhood.  So I picked up Laura from the T around 4:50 and we headed up to Perrysville Avenue. Laura dropped me at the door to get in line and she searched for a parking space.

There was a ton of signage directing me to the proper entrance. The fish fry is in the basement; there is an elevator and a set of stairs. There was more signage clarifying how to find the restrooms and where to order. When I approached the ordering table, there were two folx ahead of me. I was surprised the line wasn’t longer and hopeful this meant we’d eat quickly.

Laura and I have a pretty standard fish fry order – we get one fish sandwich, fries, coleslaw, macaroni and cheese, and pierogies as our basic fare to share. Sometimes I order another sandwich for me, but this time I opted for a shrimp basket. I also ordered clam chowder because soup is the best defense against getting sick. Plus, I love clam chowder. Add two drinks (iced tea and bottled water) and our total was about $32 which isn’t bad considering how much food we received and the soup.

Other menu options were haluski,

They gave us a number and told us to find a seat to wait for our order. The room was set with several long tables and chairs grouped in 6 or 8. There were placemats at each seat and some condiments in jars to share. There was also a table filled with plastic wrapped utensils and packets of other condiments.

We found two seats and settled in for the wait around 5:30 PM.

We sat at a table with three strangers who were polite, but wildly inappropriate in their conversation – especially the detailed recount of the time the lady got food poisoning from another fish fry. I was wishing I could do that ear humming thing to drown out that particular thread. Fortunately, they soon turned to a spirited debate on the evils of too many beers versus too much diet pop. Sigh. But they passed the ketchup and otherwise were cordial tablemates.

The thing that made me very unhappy was the placemat advertisers, particularly State Representative Jake Wheatley and Adam Ravenstahl. Why are they spending public money advertising in a religious space? They were not campaign ads. On the flip side, why is the church accepting that sponsorship and blurring the lines? This isn’t 1976 where glad handing the priest and letting the local State Senator’s wife be crowned May Queen so he had a reason to shake hands with parishioners is par for the course.

When our food did arrive, we tucked in pretty quickly thanks to our established routine of how to share fried foods. The quantity was great and the quality overall was decent.

Laura ate the fish sandwich, I had a taste. It was evenly cooked, not too heavy on the breading but not dried out. The piece of fish fit the bun that I believe came from Breadworks? Neither of us loves a 18 inch piece of fish on a 5 inch bun so kudos for proper pairing choices. I had the shrimp. They were just fine. Not great, not terrible. Sort of what you’d expect from fried shrimp in a fastfood setting where you really just want to get something into your stomach.

The fries were good – a bit crispy and seemed to be sea salted. The macaroni and cheese was middle of the road. It didn’t stand up and sing to us, but it also didn’t taste like paste. The coleslaw was peppy and a generous portion served. And the pierogies were okay. They were served with caramelized onions but everything was cold when it hit the table. The dough of the pierogies was a bit chewy and I honestly am not sure what the filling was beyond potato – cheese? onion? garlic? ???

Oh, and the clam chowder was too watery and Boston chowder like for my taste. It was flavorful and warm and a large portion, but I’m not convinced it was true New England clam chowder. Also, they didn’t serve me any crackers with the soup.

Overall, the food was decent enough. I should tell you that I woke up with a raging stomach ache in the middle of the night and had some symptoms that suggest dinner didn’t agree with me. Since we ate the same things, we concluded it was either the soup or shrimp that Laura did not sample.

The volunteer staff were friendly and bustling about, a mostly older group of white folks wearing matching tee shirts. They alternated between searching for table numbers and bellowing table numbers in a great Patti Lupone voice that startled me each time. At one point, a man asked for everyone’s attention, thanked us for our patience, and invited us to sing happy birthday to one of the volunteers. That was a great way to offset some of the “where’s the damn food” rumblings – a group activity that was not mandatory, but reminded us that we are a community. I laughed to Laura that the woman being heralded was probably born in July, but took the lap for the team.

They need more volunteers, that’s clear. Only they can fix that problem. Waiting an hour for food is usually not going to go well in any setting. My suggestion if this is an ongoing problem is to begin serving water at the tables to keep people happy while they wait via some roving pitcher people with extrovert skills. And don’t say “we are all volunteer” when people complain. That is tired response, not a useful way to keep a customer and donor appeased.

In terms of sustainability, I was disappointed. Our food was served on paper versus styrofoam, but I saw no recycling bins nor composting information. The utensils were excessively plastic wrapped. Water came from bottles instead of refillable pitchers.

As for LGBTQ friendliness, I think it is fine enough. I didn’t see any rainbow anything, but we were treated just like everyone else – none of this “are you on one check?” type aggression. The partnership with the Girl Scout was good as they are LGBTQ friendly. And I know historically that the people who have confronted me about previous reviews for this church happened to be queer so they clearly have a base of supporters. That’s enough to convince me that they are neutral at the very least.

But the worth thing is a topic that will be new to this feature – corona virus prep. My baseline expectation everywhere I go now is that they have a big pump dispenser of hand sanitizer and the bathrooms are well stocked with soap and paper towels. In a food environment, I want to see gloves and excessive hand washing.

When I approached the table to order my food, the man answering the phone while also taking table orders was coughing into his hand and then NOT taking any precautionary steps before reaching up to grab the phone or people’s cards for payment. I hustled us to the other side of the line.

What’s one of the things the CDC and everyone is saying? If you see someone coughing or sneezing, get away.

As a person with seasonal allergies, I have my share of coughing/sneezing/sniffling that is not virus related. But regardless of the cause, this man was just behaving irresponsibly. Then I went to the bathroom and discovered there was no more soap in the only dispenser, forcing me to pound the bag insert until I got something. Then I went back to an overwhelmed volunteer workforce not wearing gloves while they served food and had to tell them about the soap.

Thus, my top recommendation for Riverview Presbyteriand (and every fish fry) is to take stock of how you are addressing both the actual potential to transmit any virus and the public perception of how you are taking action. A few minimums

Cons: delayed access to my dinner, slightly cold food, lack of water service, desserts without a sneeze guard, parking, and the entire lack of coronavirus preparation. also lack of recycling or visible recycling.

One thing further. This church is practically adjacent to Riverview Park, a Citipark. That begs the question of how to incorporate composting into the church activities. I know you can’t compost oily papers, etc. But you can certainly compost some of the things. Wouldn’t it be great if the friends of the park team up with this church to create a composting project?

Finally, I do need to say that it was a big deal for me to go to this fish fry. The trauma of the Grand Jury Report has been very difficult for me so I was ready to just walk away from this all together. Going to a different flavor Christian Church wasn’t exciting for me, but the familiarity was important. I’m strangely proud that I went and can reclaim some aspects of my life in spite of the failure of the Diocese of Pittsburgh, the Holy See, and the Commonwealth of Pennsylvania elected officials to do anything substantive around this issue. The fish fry is deeply engrained in the legacy of the Catholic Church so expect me to mention it every time I write a review. The worst thing we can do is forget.